Home Archives Contact Us Subscribe Twitter Facebook MeWe Patently Mobile
Apple Sued for Fire Damage to a Rental Property that took the Life of its owner back in February
Prior to the Trump-Xi G20 Meeting on Trade, the U.S. Blacklists Five new Chinese companies on National Security Concerns 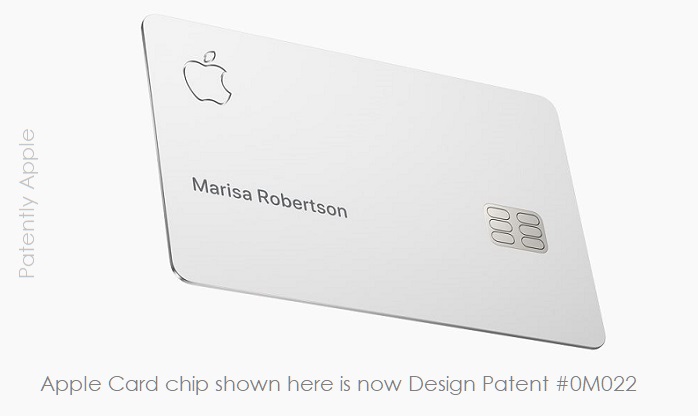 Apple was granted 27 design patents in Hong Kong earlier today. All of the designs are for different Apple Card chip designs. For instance, our cover graphic is a photo that Apple has published for Apple Card. The chip design on that card matches Apple's newly granted design patent #1802443.0M022 that is presented in our report.

Due to the fact that Apple was granted 27 design patents, only a single example representing the registration form (or granted design patent form) for design patent 1802443.0M027 is provided below. All 27 designs were filed under the same Locarno Classification #19-08 covering "printed material." Each of Apple's granted patent forms add the coverage being for "Card with Chip." 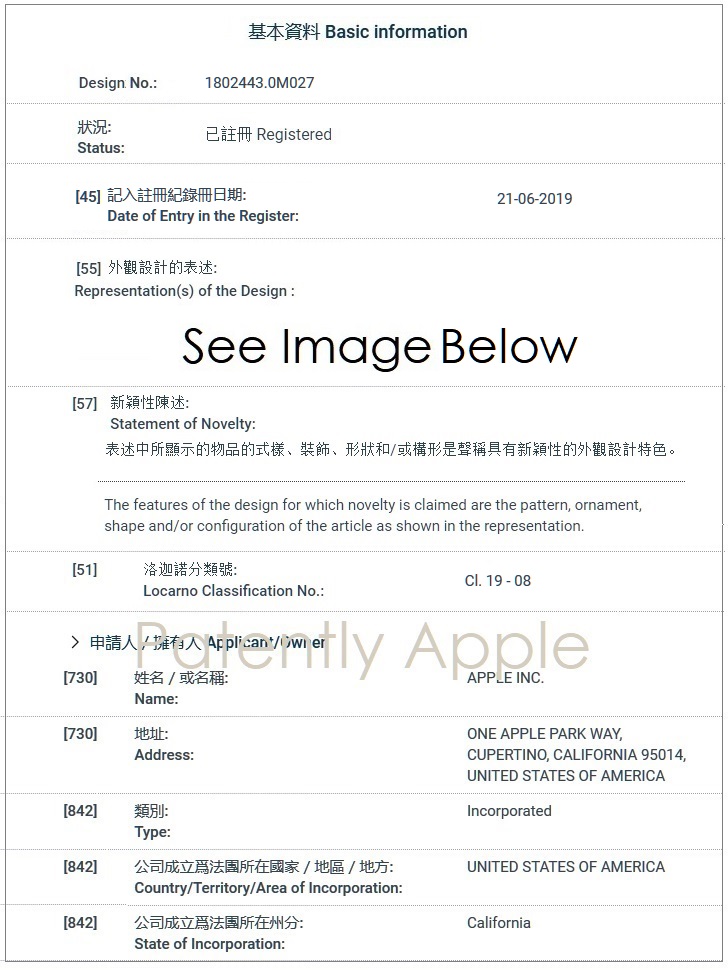 The first set of design Patent figures below represents design patent #1802443.0M027.  All of the design patents reflect the very same design format. 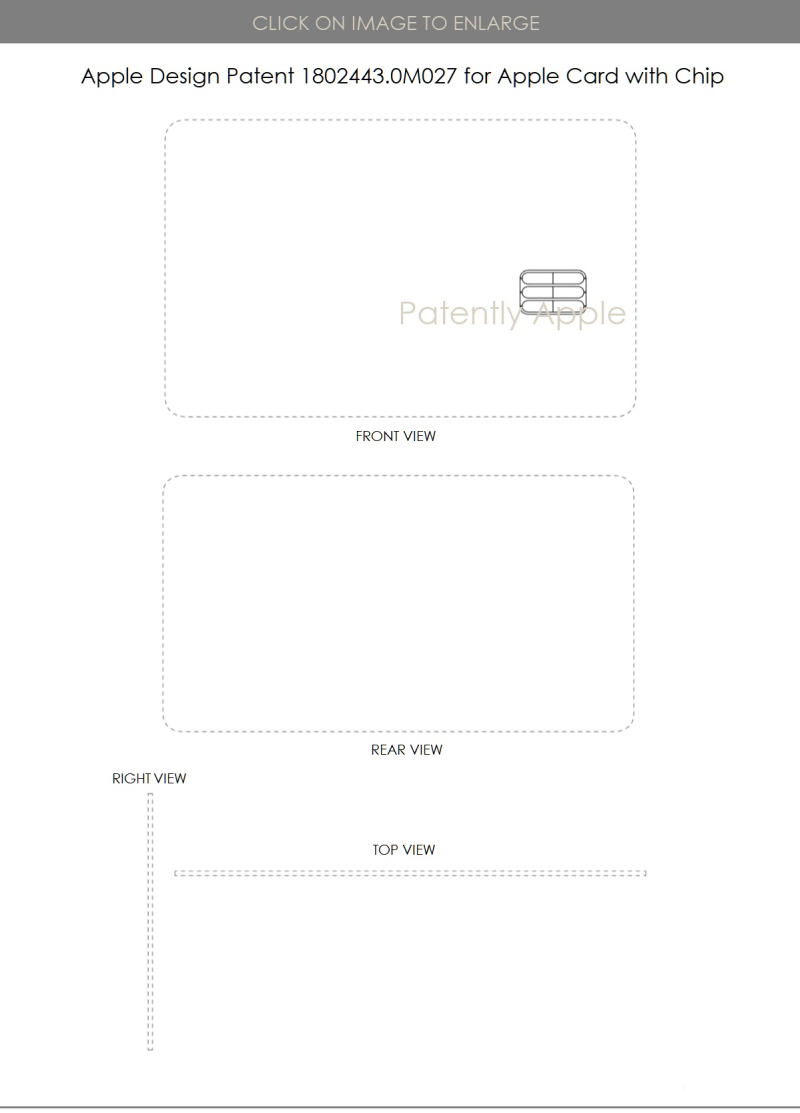 Considering that the sides and back of the card are virtually blank in all of the designs, the remaining designs presented below only illustrate the face side of the card with the chip. The chip design is what changes, but not on all designs.

Out of the 27 design patents, Patently Apple identified 15 with clear distinctions however minor. The other 12 design patents not presented below were illustrating the chip positioned being slightly to the right or slightly lower on the card. These are not covered below. 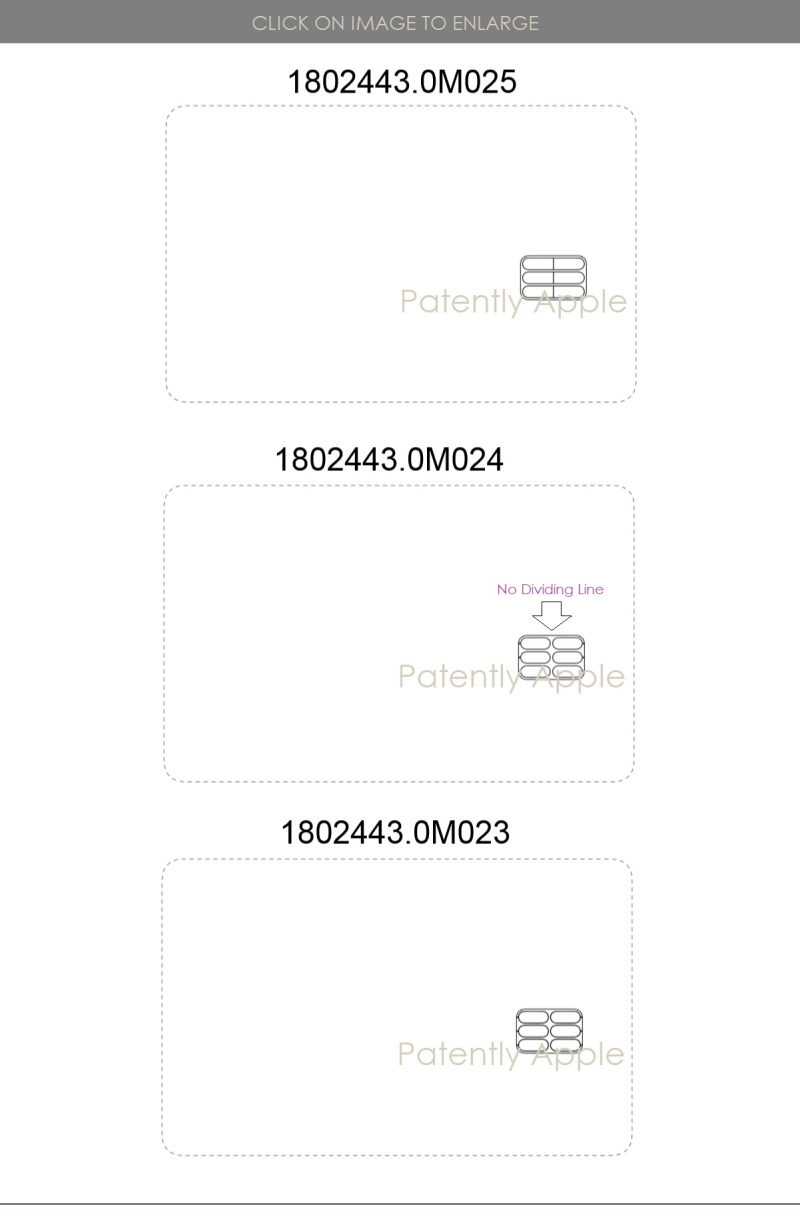 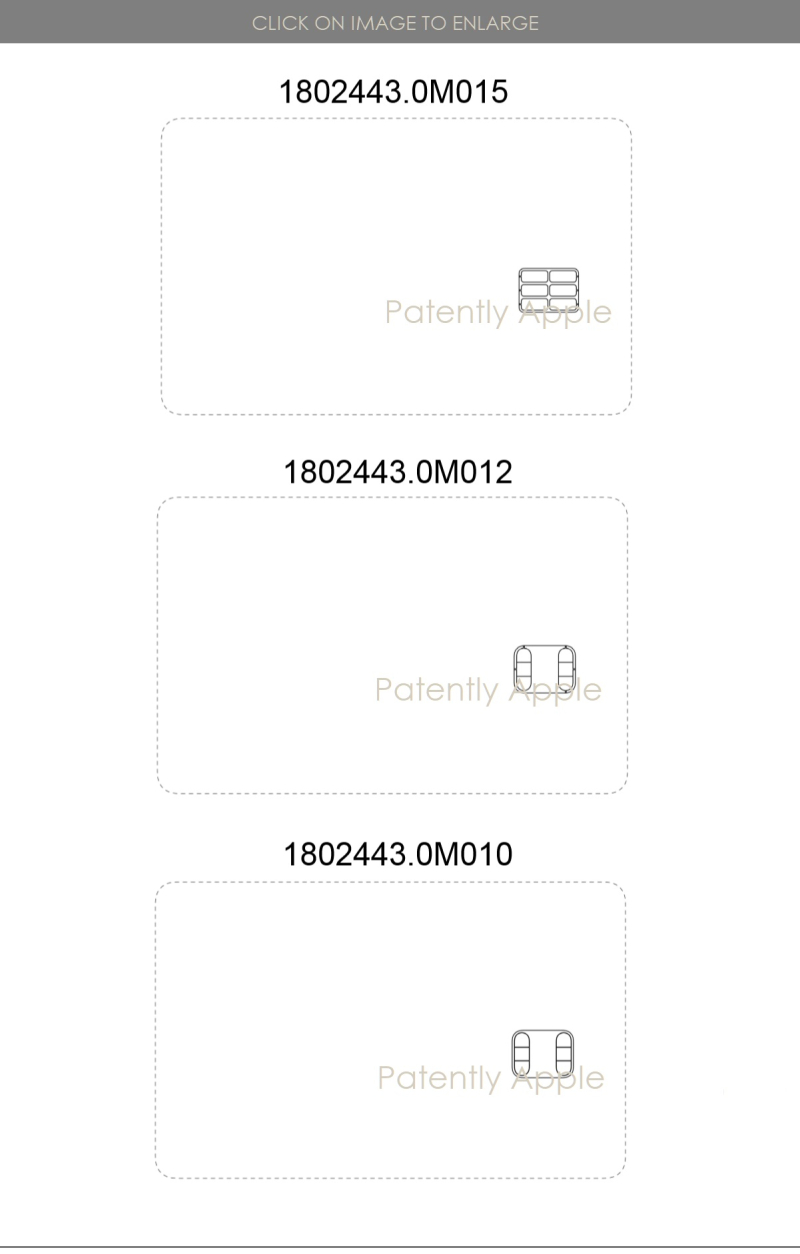 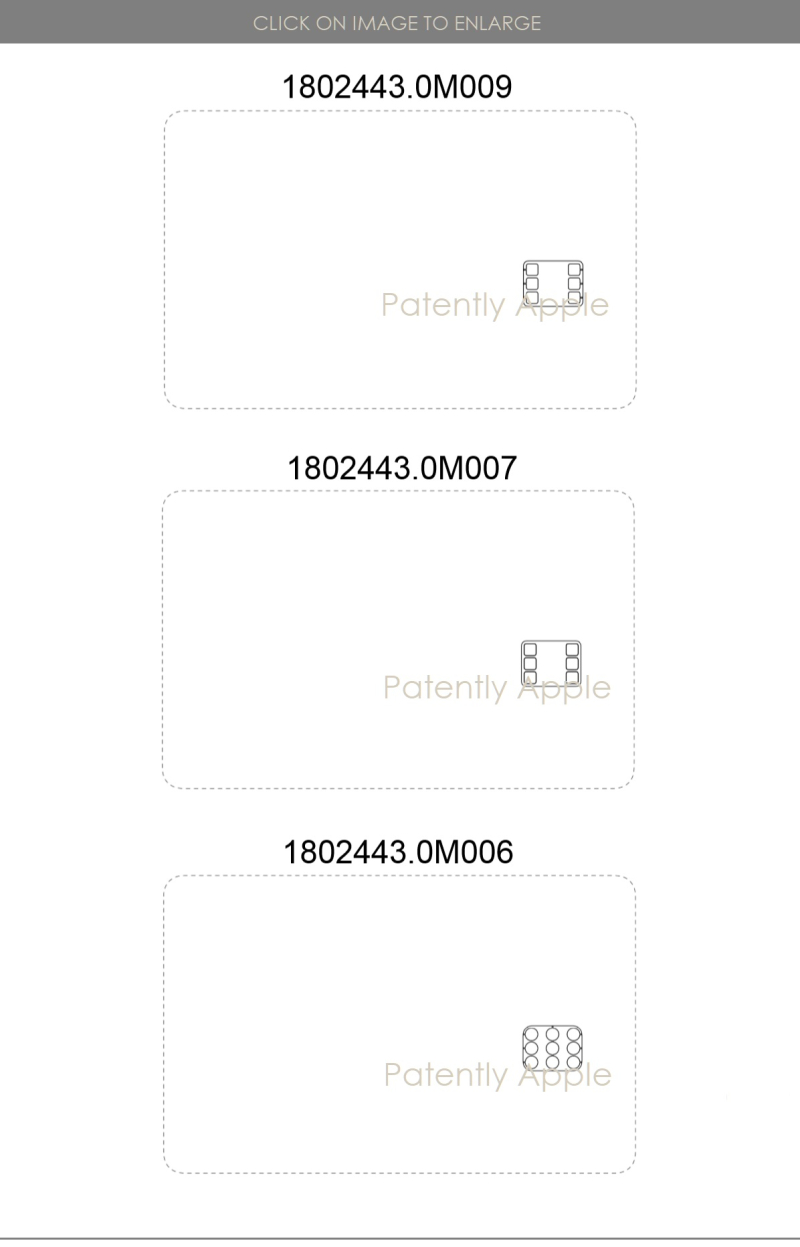 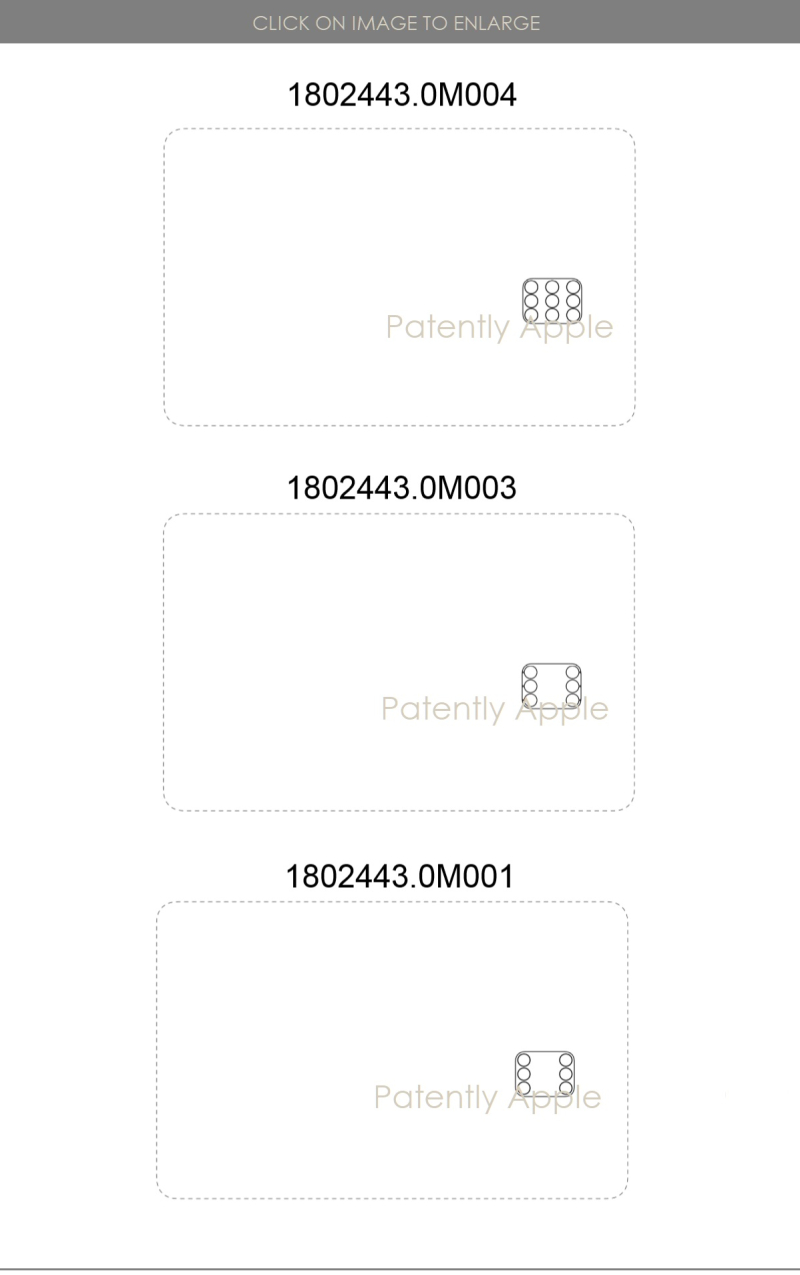 As stated at the top of the report, Apple design patents never present details. In this case we're unable to confirm why there are so many different chip designs. Whether the changes reflect different U.S. states or future country blocks is unknown at this time.