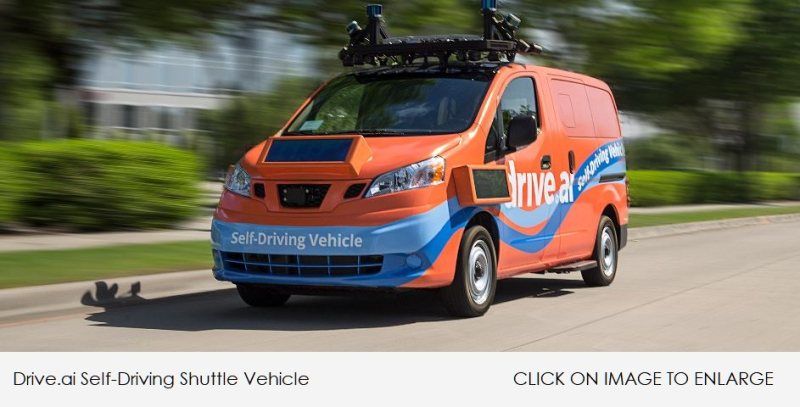 Going by patents alone, Apple has done an excellent job of keeping us in the dark as to what direction their Project Titan is actually taking.

A new report by The Information is claiming that "Apple is in the process of acquiring a well-known but struggling self-driving shuttle firm, Drive.ai, for its engineering talent" in order to boost Project Titan, according to two people briefed about the situation.

The planned deal, described as an “acqui-hire” of the Silicon Valley firm by these people, could result in dozens of Drive.ai engineers ending up at Apple. Drive.ai, which has been running small pilot programs of its prototype shuttles. Below is one of their promotional videos.

The Information further noted that "Over the past year, Apple’s Titan project appears to have made what one peer in the field, Oliver Cameron, CEO of robotaxi developer Voyage, called 'rapid' progress. That is based on his reading of Apple’s report to California transportation officials regarding the company’s prototype testing in the state.

Mr. Cameron said he applauded Apple’s choice to report the 'raw' number of times that backup drivers in its prototypes took control of the vehicles, sometimes to prevent potentially unsafe situations, during part of last year. Apple rivals in the field typically don't report similar data.

Over much of 2017 and 2018, Apple disclosed that its vehicles collectively drove nearly 80,000 miles on California public roads with its dozens of prototype vehicles—a fleet of modified Lexus SUVs. That is a relatively high number of autonomously driven miles compared to other developers in the state, though by itself that doesn’t mean Apple has found a silver bullet to catch up to companies with more experience in the field. Apple’s ultimate product goals for the technology are not publicly known.

Apple’s planned acqui-hire of Drive.ai engineers, some of whom are well-versed in neural networks that play a role in autonomous vehicle software, suggests the startup had a hard time finding the additional capital required to remain independent. The company, founded in 2015 by machine learning researchers from Stanford University, had raised $77 million and investors included New Enterprise Associates and Nvidia. You could read the full report from The Information here.

The Information has been following Drive.ai since 2017. Below is an interview conducted by the Founder + Editor-In-Chief of The Information Jessica Lessin and Carol Reiley, co-founder and President of Drive.ai which provides us with background of what the company's strengths were to initially get funding.

Carol Reiley came out of Stanford which had a long history of working on autonomous vehicles and were at the intersection of AI and self-driving vehicles which explains the "ai" in the company name.

The team's strength was AI in context with perception that provides a level of accuracy for autonomous vehicles that hadn't been reached before. Reiley spent 15 years in surgical robotics. The young company set out to work with existing fleets of vehicles in California and sold "retrofit kits" in order to get up and running in the market quickly – but of course it's not always as easy as it sounds. It's an interesting interview that gives us some insight into Apple's new acqui-hire.