Apple News+ is based on Texture, a company that Apple acquired back in March 2018. Today the U.S. Patent and Trademark Office officially published a patent titled "Generation and presentation of an overview of an electronic magazine issue," originally a Texture patent with James N. Gerlach listed as inventor. His LinkedIn page shows that he was the Director, User Experience and Product Designer at Texture. He didn't join Apple after the acquisition. He's now with a company  called 'Little Passports.'

In accordance with one or more embodiments of the instant disclosure, such concerns are addressed by communicating content in each of a plurality of electronic magazine issues (e.g., a designated published issue and/or collections of articles that form a virtual issue) as follows. One of the magazine issues is identified for communications with a magazine reader, such as a prospective or actual magazine subscriber, and an issue cover is caused to be displayed at a user display device, over a user-communication interface medium.

Such an approach may involve, for example, causing the issue cover to be displayed at the magazine reader's tablet or mobile phone, with communications via one or more of the internet and a mobile telephone network.

The displayed cover has an issue name and a cover image, such as the name of an actual or virtual magazine, and a cover image pertaining to the magazine (e.g., to the publisher and/or to content in the magazine). A summary or overview of articles behind the issue cover are generated and subsequently displayed by autonomously causing the display of the issue cover to be replaced by a set of successive screen pages respectively corresponding to the articles behind the issue cover.

Apple's patent FIG. 1 below shows an approach to generating and displaying user content; FIG. 1A shows successive screen shots of a user device implemented with the display of media content.

Apple's patent FIG. 1C below shows another example of successive screen shots of a user device implemented with the display of media content; FIG. 3 shows a publishing apparatus and approach involving the generation of one or more renditions in a common format, that provides consolidated access to content otherwise provided in a disparate fashion. 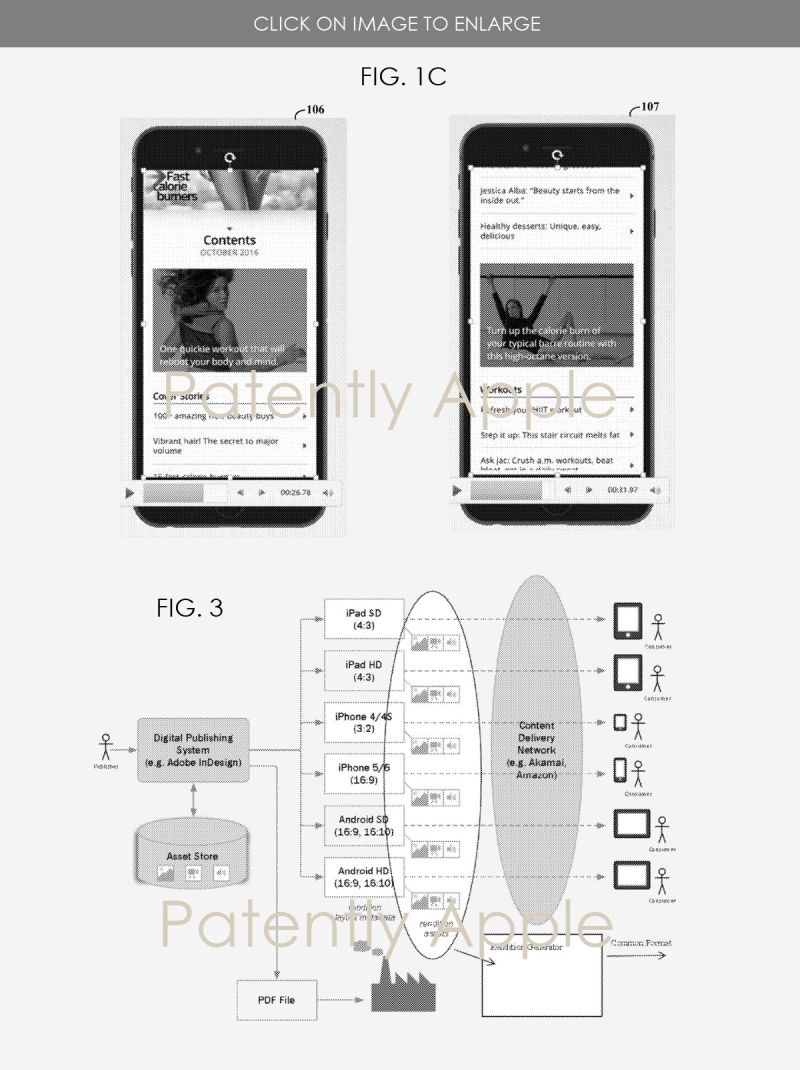 Apple's granted patent 10,311,091 was originally filed by Texture in Q1 2017. Apple refiled it in March 2018. It was published today by the US Patent and Trademark Office.

Apple published a Press Release about Apple News+ on March 25, 2019.