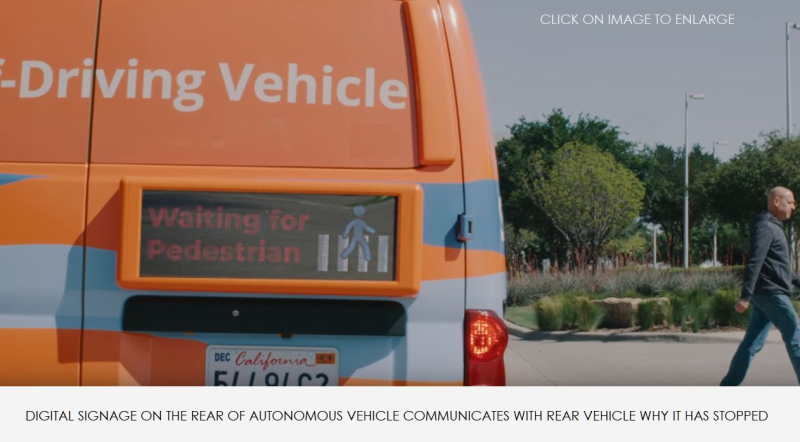 The European Patent Office published another Project Titan patent application from Apple that relates to communicating actions of an autonomous vehicle to the public, such as in a crosswalk, or vehicles behind them.

Apple notes that in a vehicle operated by a human driver, the driver's intentions may be conveyed to other individuals, such as other drivers and pedestrians, through a combination of driver-directed vehicular signals (e.g., horn, turn indicator, flashing headlights) and physical signals such as hand gestures or eye contact.

However, in a semi- or fully-autonomous vehicle, in which the driver's attention may not be fully engaged in the operation of the vehicle, other vehicles and pedestrians may lack awareness of the intended actions of the autonomous vehicle. Apple's invention is aimed at correcting this.

Last week Patently Apple posted a video from a company that Apple acquired called Drive.ai. In the video it shows how an autonomous shuttle service vehicle had signage on the vehicle that would communicate to the public.

A secondary video is shown below that shows how signage on the rear of the autonomous vehicle communicates with a vehicle in its rear that the shuttle has stopped to allow a pedestrian to cross the street. Our cover graphic shows that digital sign prominently.

The Drive.ai method was part of their retrofit kit that they sold to existing shuttle vehicles. Being a retrofit, the digital signage was boxy and attached to the exterior of a vehicle. Apple's solution would be smartly built right into all slides of the vehicle. Yet the Drive.ai videos help a reader to understand Apple's latest patent filing regarding a new external communications system.

In order for autonomous or semi-autonomous vehicles to accurately maneuver anywhere in the US, Apple revealed during their WWDC 2019 keynote last week that they've remapped the entire US with finer detail and be finished by the end of 2019. This is needed to assist a future autonomous vehicle from Apple. Apple has to rely on accurate mapping and not a third party mapping service. 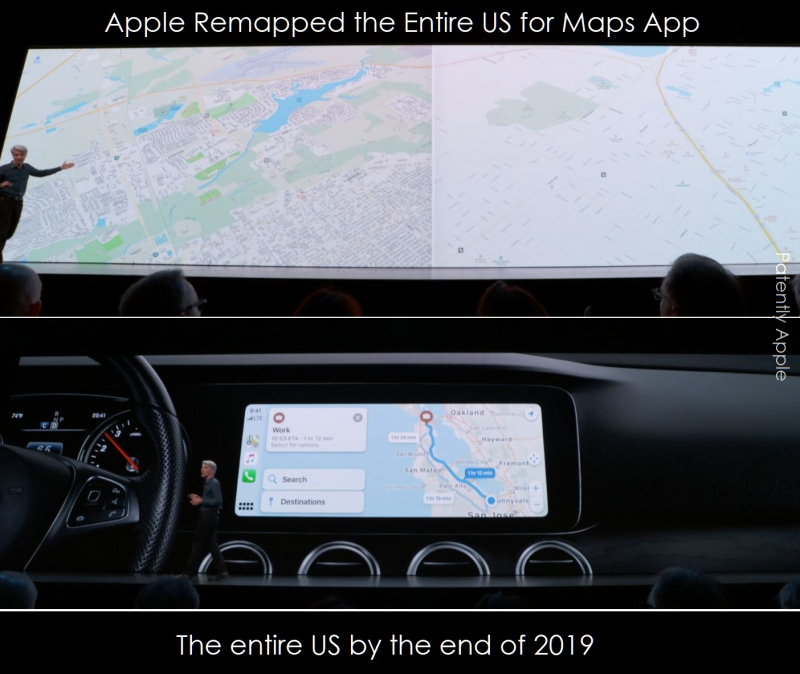 In Apple's patent FIG. 1 below illustrates a diagram illustrating vehicles and extra-vehicular objects in a transportation system. 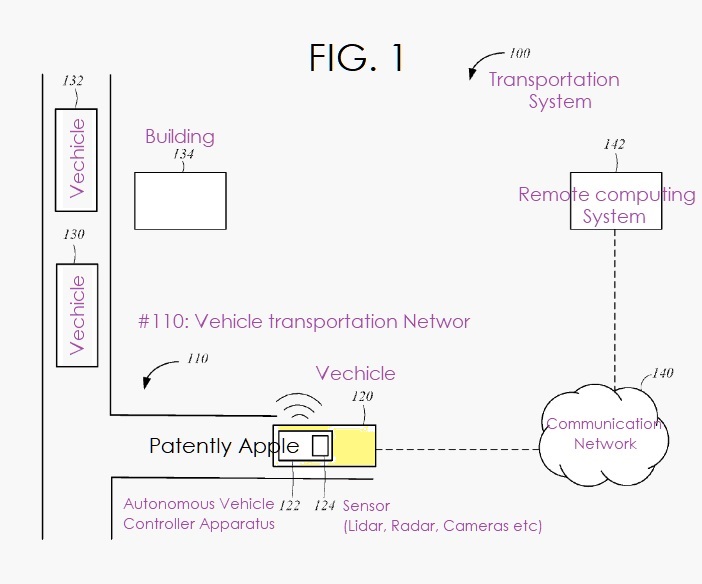 Apple's patent FIG. 2 below is a diagram illustrating a controller apparatus generating an external communication for extra-vehicular objects in a transportation system. As you can see in the patent figure, there are sound waves shown to right, left and rear of the vehicle. The autonomous vehicle having sensors and cameras will be able to communicate messages to surrounding vehicles via audio messages through external speakers and/or by digital signage.

Apple notes that "the external communication by the [autonomous] vehicle may be accompanied by a visual communication such as a blinking light or the written message "attention, moving vehicle on your right," that may be displayed on one or more of the externally visible displays on the vehicle.

As the [autonomous] vehicle #220 approaches the traffic intersection and decelerates in order to come to a stop beside the stop sign #226, the controller apparatus may generate an audible communication such as "vehicle slowing down" to indicate the reduction in the velocity of the vehicle #220.

In another example, to indicate a reduction in the velocity of the [autonomous] vehicle, the controller apparatus may generate a visual indication, such as the written message "vehicle slowing down," or a real-time display of the vehicle velocity, such as an indication of kilometers per hour, on one of the externally visible displays on the vehicle.

In an implementation, the communication magnitude may be based on the time of day or the date so that the volume of an audible communication may be reduced during evening hours or on a Sunday. 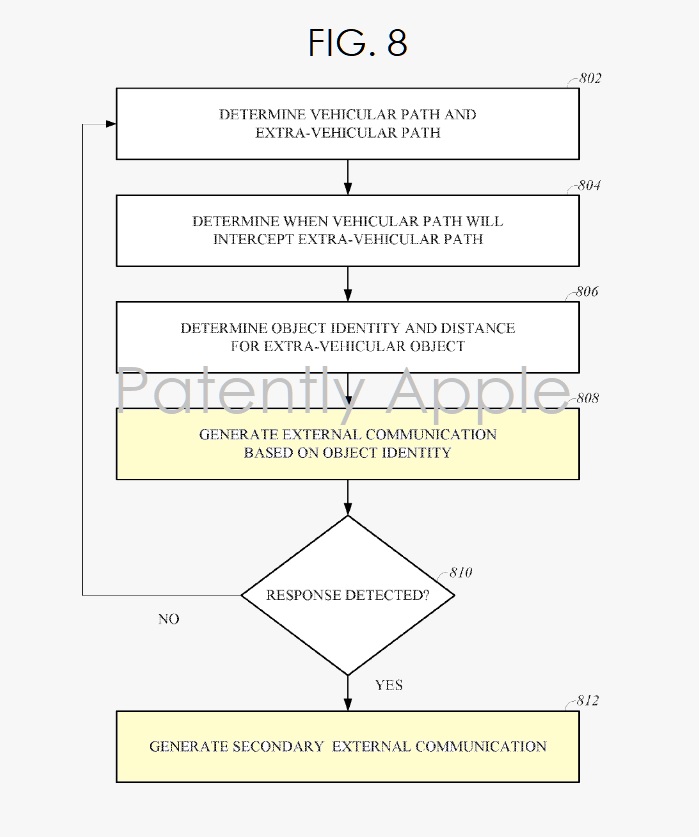 Apple notes that their location component used in their autonomous vehicles may generate navigation data or geolocation data that may be used to determine a velocity, an orientation, a latitude, a longitude, or an altitude for the vehicle. The location component may include one or more navigation devices that are able to use navigational systems such as GPS, the long range navigation system (LORAN), the Wide Area Augmentation System (WAAS), or the global navigation satellite system (GLONASS).