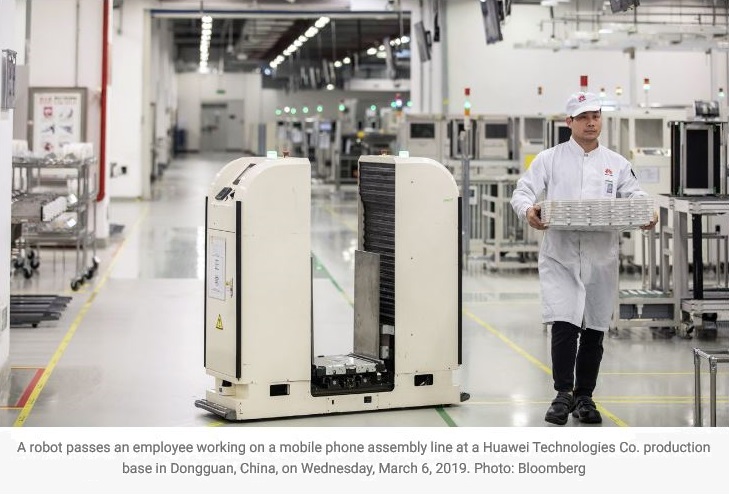 It's being reported that Foxconn, the Taiwanese electronics manufacturer that assembles handsets products for many phone brands including Apple and Xiaomi, has stopped several production lines for Huawei phones in recent days as Huawei has reduced orders for new smartphones, according to South China Morning Post sources.

The sources stipulated that "Smartphone manufacturers have flexibility built in their production schedules and can increase, or reduce, orders to meet changing conditions, and it is not clear whether the decreased production is temporary or part of a longer-term cut."

At a Friday event in Shanghai unveiling its flagship Honor 20 series for the China market following its global launch in London ten days earlier, Honor president Zhao refused to get caught up in the media questioning alleged slowdowns due to recent U.S. maneuvers against Huawei.

He simply stated that "All the difficulties make us stronger, no matter in mentality or in action." The South China Morning Report adds a CNN video report wherein Sherisse Phan states that popular programs like Chromecast and the Google Play Store will no longer be available and affect Huawei's launch of their 5G phones. Phan points out that analysts are saying that without Google's Android OS and key apps, Huawei phones will become a brick.

At a meeting set with Britain's Prime Minister Theresa May this week, Trump will once again warn Britain that security cooperation could be hurt if London allows China’s Huawei a role in building parts of the 5G network, the next generation of cellular technology.

The Trump administration has told allies not to use its 5G technology and equipment because of fears it would allow China to spy on sensitive communications and data. Huawei denies it is, or could be, a vehicle for Chinese intelligence. With PM May stepping down, the U.S. want to impress on the next leaders of the U.K. the importance of working with them against Huawei.

It appears that the politics behind the U.S. stance against  Huawei won't be softening in the near future.

This week Patently Apple reported that Huawei had filed for the "Ark OS" trademark in Europe. No information on the timing of such an OS to market is known.  More importantly, it's a gamble that Android fans will even be interested in buying a Huawei smartphone running a first-Gen non-proven OS.

With confusion surrounding Huawei smartphones at the moment, it's believable that production lines for Huawei phones at Foxconn have closed until  further notice.