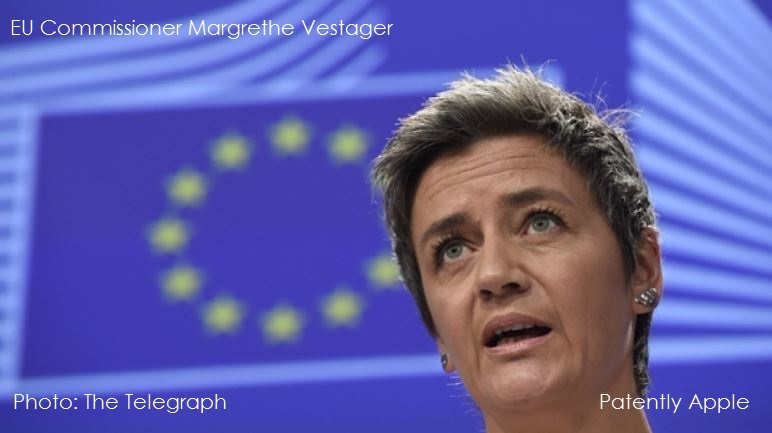 In mid-March Patently Apple posted a report titled "Spotify has Filed a Formal Complaint against Apple with the European Commission about it's Unfair Apple Store." The claim centers around Apple charging a 30% fee on developers for in-app subscription purchases made through the App Store. The firm says those fees make it nigh impossible to keep its prices competitive with Apple Music.

The EU Commissioner has an itchy trigger finger when it comes to investigating and then charging massive fines on US companies over the last few years. In this situation, Apple responded quickly to Spotify's complaint within days stating that "After using the App Store for years to dramatically grow their business, Spotify seeks to keep all the benefits of the App Store ecosystem — including the substantial revenue that they draw from the App Store’s customers — without making any contributions to that marketplace."

Apple's response was like talking to the wind. The EU's threat of investigating will reportedly become  a formal investigation in the next few weeks.

The EU competition authority has decided to launch an antitrust probe into Apple’s conduct after considering the complaint and surveying customers, rivals and others in the market, the Financial Times reported, citing three unnamed sources.

The investigation comes as the battle for the future of the music industry intensifies. Spotify, which last month hit 100m paid subscribers to its service, is the market leader in music streaming but faces increasing competition from bigger technology players, namely Apple who has overtaken Spotify in the U.S.

The Financial Times further reports that "Thomas Vinje, a lawyer at Clifford Chance who worked on Spotify’s complaint, said other groups had 'similar concerns' but were 'too afraid to take on Apple.

In 2017, Margrethe Vestager, the EU’s competition commissioner, forced the tech group to pay €13bn in back taxes after ruling its sweetheart tax deal amounted to illegal state-aid from Ireland. The company and the Irish government appealed against the decision to the European General Court, which is expected to rule later this year.

Apple is not the only tech group in Brussels’ crosshairs. The EU Commission forced Google to pay a record-breaking €8bn in penalties for abusing its market power in three separate cases. Microsoft also struggled with EU enforcers in the 2000s and paid about €2bn in fines."

These cases have ignited claims of anti-American bias. For more on this read the full Financial Times report here.

Under President Obama, the U.S. Treasury investigated retaliatory measures against the EU's aggressive investigation of Apple & other US companies. Unfortunately it was all bark and no bite.

What would help is having Apple fans drop Spotify and other European streaming services out of protest.

There's been a lot of anger being expressed on this issue by U.S. businesses. Investor's Business Daily posted a report in 2017 titled "EU's Antitrust Attack On Google Is Really An Attack On U.S. High-Tech Innovation." The report concluded by stating that "Both the president and Congress should work together to put an end to this kind of abusive antitrust behavior by foreign governments."