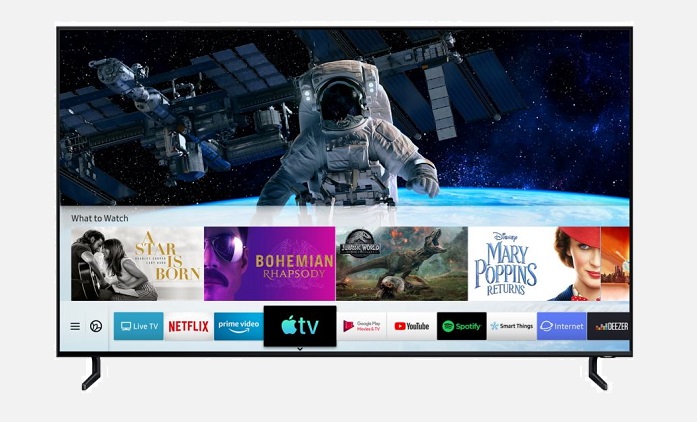 Patently Apple posted a report back in early January about Samsung surprising the market with an announcement that their 2019 TVs would offer iTunes Movies and TV Shows while offering AirPlay 2 later this year.

In a press release timed to Apple's Apple TV App release announcement, Samsung Electronics announced that beginning today, all 2019 Samsung Smart TVs and select 2018 TV models with a firmware update will feature the all-new Apple TV app (as illustrated in the image above) in more than 100 countries and offer AirPlay 2 support in 176 countries. Samsung customers are now able to enjoy Apple TV channels and iTunes movies and TV shows on Samsung Smart TVs.

“For the last decade, Samsung has been at the forefront of offering the broadest selection of content available to consumers on our Smart TV platform.” said Won-Jin Lee, Executive Vice President, Visual Display Business at Samsung Electronics. “As the first TV manufacturer to integrate the Apple TV app on a Smart TV platform, Samsung continues to offer our customers incredible value and access to the Apple TV app experience on the largest screens available today.”

Fully integrated into Samsung’s Smart TV platform, users can simply select the Apple TV app icon to access all of their iTunes movies and TV show purchases and browse more than 100,000 iTunes movies and TV shows to buy or rent, including titles available in 4K HDR, in pristine picture quality. Customers around the world can also subscribe to Apple TV channels within the Apple TV app — paying for only the ones they want — and watch on demand directly in the app. Samsung Smart TV users will be able to enjoy Apple TV+, Apple’s original video subscription service, in the Apple TV app across the same model lines when the service launches this fall. With AirPlay 2-enabled Samsung Smart TVs, customers can now also effortlessly play videos and other content from their iPhone, iPad or Mac directly to their Samsung Smart TV.

The Apple TV app will work seamlessly with Samsung’s Smart TV Services, such as Universal Guide, Bixby and Search, to create a consistent experience across Samsung’s platform.