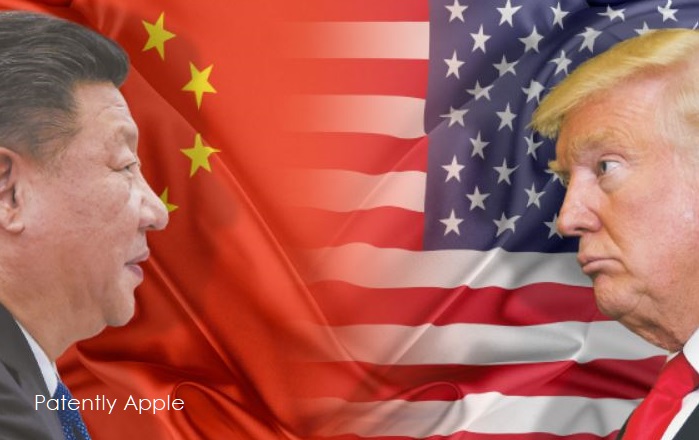 In the Q&A session of Apple's Financial Conference Call for Fiscal Q2 2019 Apple's CEO was optimistic that things would turn around in China. Shannon Cross of Cross Research asked Cook if he could talk a bit more about what he was seeing in China? The forth point Cook made in answering Cross was: "there is an improved trade dialogue between the US and China and from our point of view this has affected consumer confidence on the ground there in a positive way. And so I think it's a set of all of these things and we certainly feel a lot better than we did 90 days ago."

There's now a chance that Cook's "forth point" on China may be in question if the US-China trade talks break down this week.

In less than a week later, that "confidence" has been shaken on Wall Street today and could be bad for Apple if the rhetoric and amped up any further. But as of now, Wall Street's knee jerk reaction has calmed by gaining half of the morning's losses.

CNBC reports today that "Stocks fell on Monday after President Donald Trump said that the U.S. will hike tariffs on goods imported from China, but managed to recover a good chunk of those losses around late-morning trading.

Larry Benedict, founder of The Opportunistic Trader said that "A lot of people were caught long. But the reaction is actually “relatively under control considering it’s a pretty big headline. “I think [Trump] is trying to put pressure on China to make a move."

Trump said in a tweet Sunday afternoon that the current 10% levies on $200 billion worth of Chinese goods will rise to 25% on Friday. He also threatened to impose 25% tariffs on an additional $325 billion of Chinese goods "shortly."

For 10 months, China has been paying Tariffs to the USA of 25% on 50 Billion Dollars of High Tech, and 10% on 200 Billion Dollars of other goods. These payments are partially responsible for our great economic results. The 10% will go up to 25% on Friday. 325 Billions Dollars....

Though trade negotiations between Washington and Beijing officials are set to resume on Wednesday, the president lamented that the progress is moving “too slowly” as China tries to re-negotiate terms of the deal.

Trump said in another tweet Monday that the U.S. is losing between $600 and $800 billion a year on trade, noting: “We’re not going to be doing that anymore.” Amen to that. Read more on CNBC's report here.

Ratcheting up the rhetoric before trade talks with China on Wednesday is perhaps a tactic to raise the heat on China. Though it should be noted that there are some Apple suppliers that have been opening production plants in Vietnam as a backup plan should the trade talks fail to produce a positive agreement.