Earlier this month the U.S. Patent and Trademark Office published a patent application from Microsoft for a next-gen hybrid Pen-Mouse allowing users to write, scribble or draw on a future Surface Notebook's palm rest or use it as a presentation tool / pointer. It could also act as a camera to capture images. That latter feature seems to be a new trend that's forming. Patently Mobile covered this feature in a granted patent report for a Samsung Pen back in February.

According to aspects of some embodiments of the present disclosure, additional and improved functionality is added to the active stylus by adding a pointing stick or an optical sensor to the stylus. Input from the pointing stick or the optical sensor may then be transmitted to the computing device via another wireless channel, e.g. Bluetooth communication, near field communication (NFC), radio frequency (RF) that is independent from the electrostatic channel of the touch-screen. According to some example embodiments, a stylus may automatically switch between transmission via the electrostatic channel associated with the touch-screen and transmission via another wireless channel based on sensing proximity of the stylus to the touch-screen.

Microsoft's patent FIG. 2B below show us a schematic drawing of a user operating a future Surface Pen to interact with a Surface or Surface Book display using the palm rest area as a writing or drawing surface that's away from the screen. Optionally, FIG. 2B shows us that this future Surface Pen could act as a mouse using a clickable top. 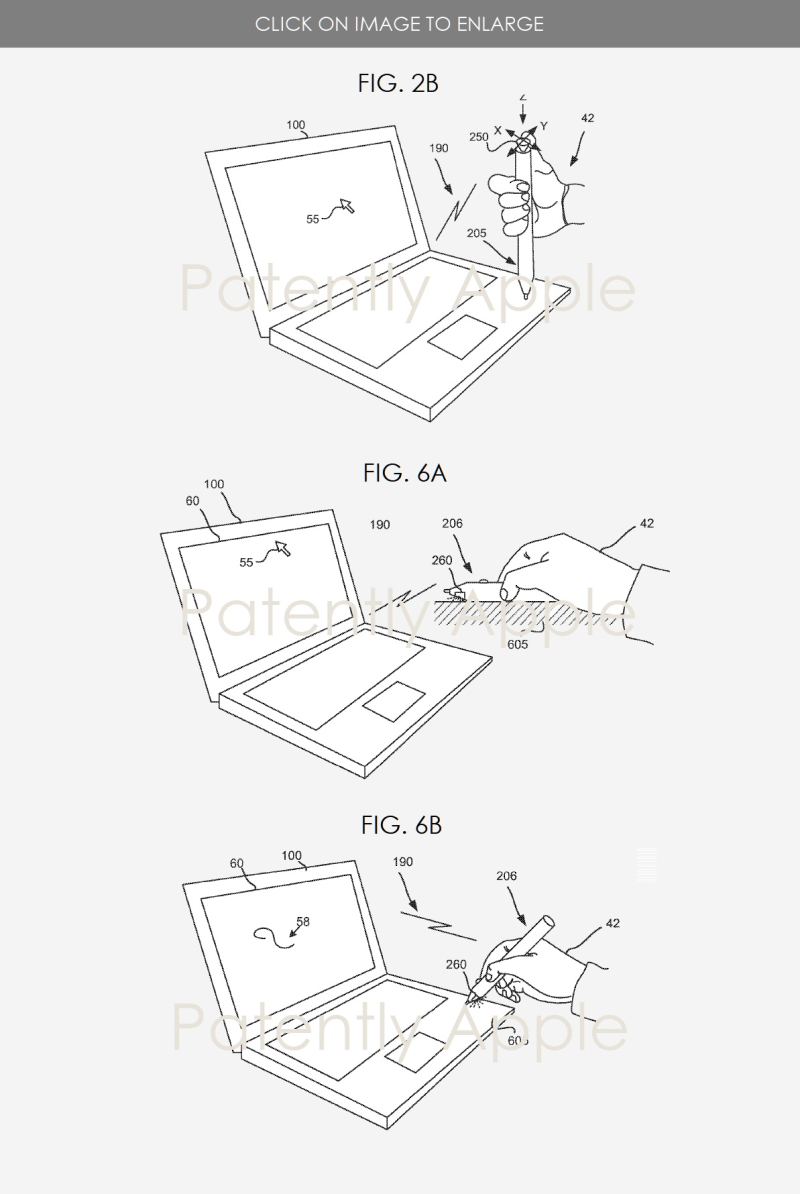 In some example embodiments, optical sensor 260 may be oriented and configured to track a user's hand #42 moving the Surface Pen while the stylus is positioned horizontally on a surface #605 (FIG. 6A) and while the Surface Pen is held in a writing position (FIG. 6B) on a Surface Notebook palm rest area.

If you're interested in learning more, check out our full Patently Mobile IP report on this invention here.

Apple has many ideas for future Apple Pencil features including it being used on a future iPhone in our Apple Pencil Archives, but none have yet to surface covering the features that Microsoft is contemplating in this latest report.

In 2016 Bloomberg forecasted that Apple Pencil would soon work with a wider range of apps beyond being limited to its drawing app. We referenced that report in a 2017 patent report showing Apple Pencil working with several future business applications.

If Apple would allow Apple Pencil to work with Safari for highlighting sentences and paragraphs, for making annotations on a webpage and/or working document, it would add immense value beyond the limitation of drawing. It would be a huge leap forward if Apple gave the majority of their fan base reason to use Apple Pencil. The artsy fan base is just a tiny niche. It's time for Apple to expand the value of Apple Pencil.

If you have any thoughts on this, send in your comments below.