Home Archives Contact Us Subscribe Twitter MeWe Facebook Patently Mobile
The OnePlus 7 Pro Launched in New York Today Starting at US$669 for a 6.67" Display, Pop-Up Selfie Cam and more
Apple begins new iPhone 6s Ad Campaign promoting "Now made in India" at the Tempting Price of under US$400

Some of the latest research for the tablet market in Q1 2019 shows us that Apple, Huawei and Amazon have each found ways to press their advantage and gain market share as the rest of the market struggles to find momentum.

According to Strategy Analytics, the overall global tablet market declined 5% year-on-year in Q1 2019, with a few vendors bucking that trend. 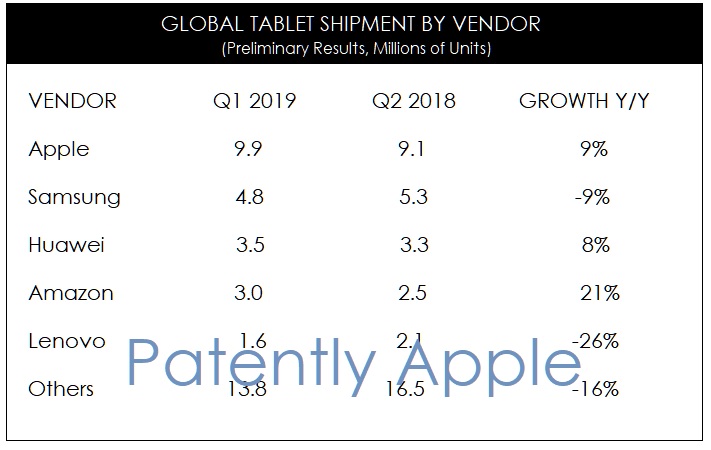 Eric Smith, Director – Connected Computing for Strategy Analytics, noted in the report that Apple's iPad shipments "grew 9% year-on-year to 9.9 million units in Q1 2019, pushing its worldwide market share to 27% of the Tablet market. The new iPad Pro portfolio had momentum this quarter, boosting ASPs to $490 this quarter from $451 in Q1 2018." 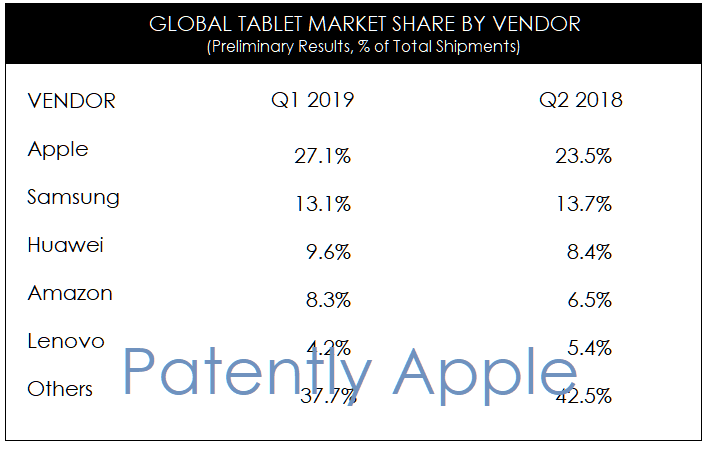 During Apple's last financial conference call for fiscal Q2 2019 held in late April, CEO Tim Cook noted in his opening statement in respect to iPads: "We had a blockbuster quarter for iPad, with revenue up 22% from a year ago — this is our highest iPad revenue growth rate in six years."

Cook later added that "The most recent surveys from 451 Research measured a 93% customer satisfaction rating for iPad overall. Among customers who plan to purchase tablets, 77% of consumers and 75% of businesses plan to purchase iPads."

With Microsoft's Windows 10 being shut out of the top five tablet vendor list, Chirag Upadhyay, Senior Research Analyst for Strategy Analytics threw them a bone by noting that "Most Windows Detachable 2-in-1 vendors are targeting the premium tier for enterprise users to make higher profits."

How nice, yet the analyst later added that "now that Apple is competing strongly with three iPad Pro models in this price tier, Windows market share actually fell by 1 percentage point year-on-year to 14%. Windows shipments fell 13% year-on-year to 5.0 million units in Q1 2019 from 5.7 million in Q1 2018.

Lastly, the report noted that Apple "refreshing iPad Pro and MacBook Air at the same time played into Apple's strategy to target different user bases with different computing solutions. Education still represents a good opportunity for Apple as schools often have PCs and tablets available for different use cases."