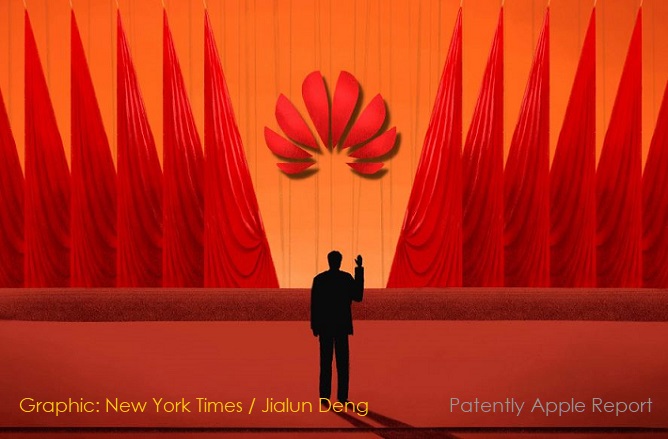 Last August it was reported that President Trump signed a bill banning government use of Huawei and ZTE Tech. In late December Patently Apple posted a report titled "The Trump Administration could move Swiftly in the New Year to ban U.S. Companies from buying Huawei Telecom Equipment." The U.S. will now press allies to keep Huawei out of 5G in Prague meeting. The timing of a New York Time report titled "Huawei's Communist Culture Limits its Global Ambitions" is as interesting as the report itself.

Today, 32 years after Ren Zhengfei founded Huawei the telecom giant, Zhengfei is still struggling to prove that Huawei is a private enterprise and independent of the Chinese government. The task is more urgent than ever. In recent months, the Trump administration has said China could use Huawei’s equipment to spy on other countries.

The New York Times notes that "Zhengfei's management thinking 'will naturally carry very deep imprints of the Communist Party culture,' according to a 2017 book, 'Will Huawei Be the Next to Fall?' A different version was published in English as 'The Huawei Story.'

Judging from the book, his speeches and other appearances, Zhengfei Ren is a student of Western learning. He has said he admires the American political and legal systems because they offer better protection for businesses — not an unusual idea among China’s business class. He paid I.B.M. consultants for nearly two decades to help Huawei institute American-style corporate management. To catch up with the Western competitors, he once said, Huawei needed to “wear American shoes” even if it meant hurting its feet.

Zhengfei added in his book: "Only by learning from them with all our humility can we defeat them one day."

The New York Times adds that "Huawei’s structure looks strikingly similar to the [communist] party’s. Each is run by a senior group of seven officials, with similarities even further down the line. It calls its management training program its Central Party School, which is the name of the Communist Party institution that trains promising cadres.

Zhengfei, a former military engineer, also infuses Huawei with a militant culture. He sometimes refers to major business deals as a “Battle for Triangle Hill,” a reference to a clash during the Korean War that included Chinese and American troops.

The Times further added that "Huawei’s hard-charging corporate spirit — known as 'wolf culture' to outsiders and employees and as 'striving culture' to executives — can trace its roots to the party. When Huawei came under attack a decade ago after some employee suicides made headlines in China, Zhengfei remarked, according to the book: “What’s wrong with striving? We learned this from the Communist Party. We’ll strive for the realization of communism until the end of our lives."

You could read the full report here. I think every time that I see Zhengfei in the press all warm and fuzzy in the future, I'll remember that at his core he's a committed communist.

This week IDC's global smartphone report was published and it rattled a lot of Apple Fans. In one Patently Apple report posted this week I noted that "Outside of IDC's surprising iPhone stats, there are some shiny spots for the iPhone. On April 16th we reported that even with a bad holiday quarter, Apple was still the king of premium smartphones worldwide. On that same day we also reported that in Q1 2019 Apple's iPhone XR was #1 in the U.S and Britain while the iPhone X was the bestselling smartphone in urban China. On April 24th we reported that Apple's trade-in program made the iPhone XR the bestselling smartphone in the U.S for calendar Q1."

The idea was to balance the disturbing findings from IDC in their latest worldwide smartphone shipment report for calendar Q1 2019 that lacked context.

Yet to be fair, without Apple publishing their own data any longer, this kind of shot at Apple was bound to arise without being able to defend it or challenge it with authority.  While IDC is generally respected in the industry, this report seemed out of whack in context with a competing report by analytical company Canalys.

International Data Corporation's (IDC's) report rattled most Apple bloggers including AppleInsider, 9to5Mac, our site and others as it should have.

Yet AppleInsider writer Daniel Eran Dilger conveniently forgot that the site that he writes for posted a report titled "Apple iPhone shipments declined 30% in Q1, now in third place behind Samsung and Huawei."

Even though his own site went along with IDC's reported numbers on Apple's decline he concluded in a rant today that "Journalists need to take a more critical look at IDC's "embarrassing" numbers and not simply take them at face value."

Of course that would embarrassingly mean that AppleInsider's own Senior Editor Mikey Campbell would be included in those taking IDC's number at face value, right? Well, not in Dilger's report where the sinners are all external,  especially Patently Apple.  How convenient.

Dilger is of course known in the Apple community as a loud bombastic junk yard dog styled writer.  His job is focused:  smash, trash and burn anyone or anything that he or AppleInsider don't agree with. There's no equivalent in the community.

Dilger getting his nose out of joint because I stated that the IDC's report was "an eye opener," was surprising because it was so meaningless a point. The data was an eye opener to dozens of tech reporters covering the IDC data around the globe. It's embarrassing that he decided to waste people's time ranting about that point.

Dilger went on to write that I added the Canalys link as "Contradictory data" instead of understanding it for what it was; adding a link to the Canalys report to show Apple fans that there was a contradiction in the reporting of the data.

Perhaps in the future, Dilger should seriously consider attacking his own site writers for the sins that they've committed on a topic he's covering before being tacky and pointing to what a competing site is saying.