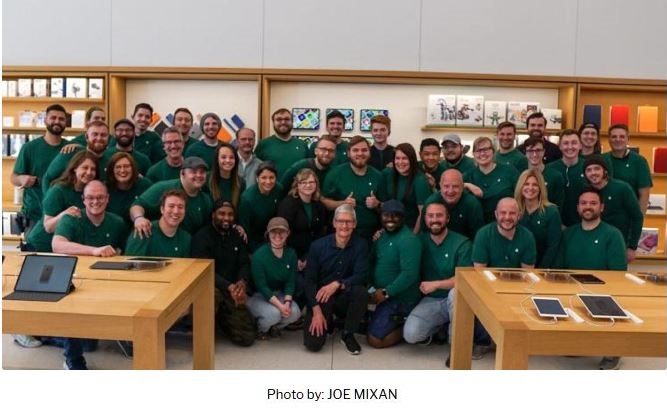 It was reported on Friday that in the first quarter, Buffett’s Berkshire Hathaway bought an astounding 75 million shares of Apple. That adds to the 165.3 million shares Berkshire already owned at the end of 2017. In a statement to CNBC, Apple's CEO Tim Cook said that the company is "thrilled to have Warren and Berkshire as a major investor."

Fox Business News reported that "Crowds thronged around the Apple executive, who posed for selfies and shook hands." There's a 25 second video of Cook commenting on Warren Buffet  here.

While in Omaha Apple's CEO dropped in on the local Apple Village Pointe Store as noted in our cover graphic late yesterday.

A local report noted that "According to a store manager, Cook was at the store for about 20 minutes, talking to staff, taking photos and greeting customers. Joe Mixan was at the store to pick up a refurbished keyboard. He's a retired firefighter who worked at the Apple Store until approximately 2010. The cover report photo was taken by Mr. Mixan.