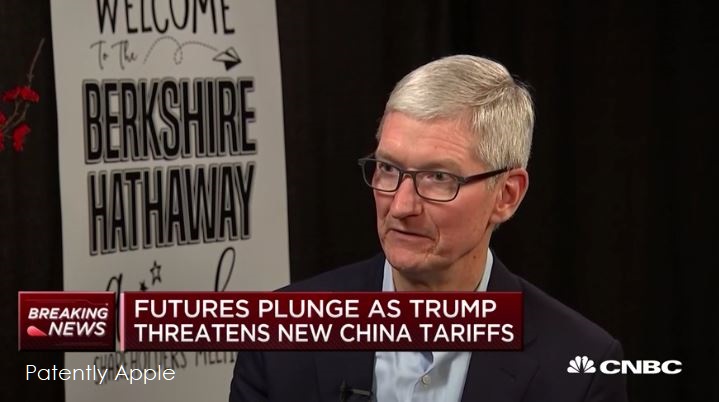 Last week Patently Apple ended a report by noting: "Lastly, Apple's Form 10-Q also noted that "Payments made in connection with business acquisitions, net, $291 million for Q2 2019 compared to $305 million in Q2 2018." No details were provided as to what companies were acquired."

Over the weekend we reported that Apple's CEO surprised the Omaha Apple Store team with a visit prior to attending the annual Berkshire Hathaway Shareholders' Meeting. The report linked to to a brief 25 second video report by CNBC's Liz Claman on Cook's impression of Warren Buffet.

Later on Saturday CNBC's Becky Quick sat down with Tim Cook (and later Warren Buffet) for an interview. CNBC also learned more from Tim Cook that they acquired a company every two to three weeks on average.

In roughly the last six months alone, Cook said Apple has bought approximately 20 to 25 companies. Apple often doesn’t announce these deals because the companies are small and Apple is “primarily looking for talent and intellectual property,” Cook said.

The aggressive acquisition style highlights Apple’s massive purchasing power. In its fiscal second-quarter earnings report, Apple reported a $225.4 billion cash hoard, making it one of the most cash rich companies in the world. Apple has pledged to contribute $350 billion to the U.S. over five years, through expansion and taxes on repatriated cash.

Cook said that after investing in initiatives like its new $1 billion campus in Austin, the company turns its attention and spending to other goals.

”[I]f we have money left over, we look to see what else we [can] do,” Cook said. “We acquire everything that we need that can fit and has a strategic purpose to it. And so we acquire a company on average, every two to three weeks.”

Even though Apple acquires several companies a year, it’s famous for not making major acquisitions. Its largest in recent memory was its $3 billion purchase of Beats in 2014. Apple turned Beats into its Apple Music streaming service and continues to sell Beats headphones as part of its growing wearables category. For more on this read the full CNBC report here.