Last Summer Patently Apple posted a report titled "Apple's Autonomous Cars will Introduce a Unique 'Countdown Indicator' that Prepares Passengers of a coming Maneuver." The patent described how a driver could put a car into autonomous mode and feel comfortable that the vehicle will effectively communicate its intentions to both the driver and passengers. For instance, if the car was about to make a lane change, it would notify the occupants that such an event would occur in a number of seconds and provide a countdown either visually on a dashboard or via a digital assistant's voice. The first generation of autonomous or semi-autonomous vehicles must put drivers at ease to overcome natural fears of a runaway vehicle.

According to Apple, the invention covers a fully-actuated suspension system which can provide adjustable displacement of a sprung mass from a neutral suspension position over an unsprung mass.

While it's a highly technical patent that car enthusiasts may enjoy diving into for details later, for consumers, the result of this invention is that it will be a part of Apple's ongoing Project Titan that is set to make the shift to next-generation vehicles that will be smarter while providing autonomous features and options. A part of this invention covers an autonomous navigation system and an active safety system. 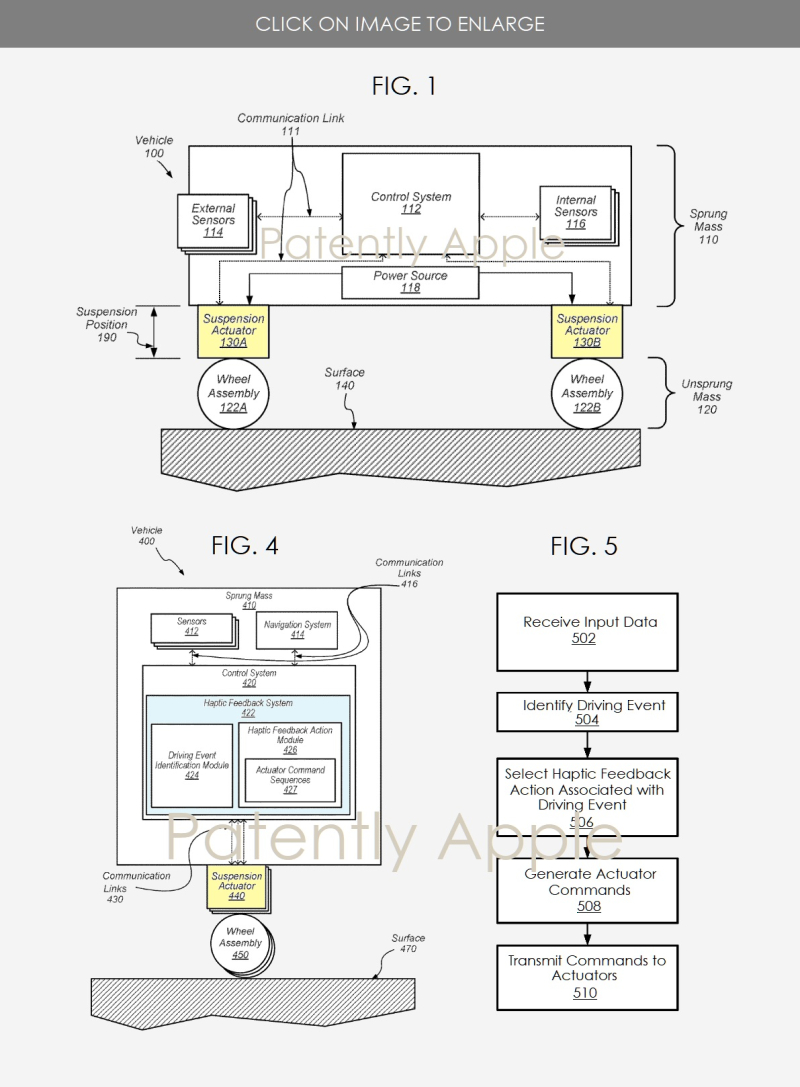 Apple's patent FIG. 5 above illustrates controlling one or more sets of suspension actuators in a vehicle to provide haptic feedback to a driver of the vehicle.

The system can compensate for vehicle oscillations at frequencies below the primary ride frequency, thereby mitigating the risk of occupant motion sickness.

The most interesting features are found under their Haptic Feedback segment. Here Apple notes that in some embodiments, a fully-actuated suspension system included in a vehicle provides haptic feedback, also referred to herein as kinesthetic communication, to one or more occupants of the vehicle, including a driver of the vehicle, based on particular actuations of one or more suspension actuators included in the fully-actuated suspension system.

In some embodiments, one or more of the suspension actuators in the fully-actuated suspension system can be actuated to perform one or more non-driving functions, including inducing a low frequency rocking motion of the vehicle cabin to induce sleep in one or more occupants, including a child occupant.

Haptic feedback can leverage a driver's utilization of tactile feedback, also referred to as "touch and feel", as a source of information about the vehicle, road surface, and surrounding environment.

Some surfaces, including one or more roadways, can include various devices, including rumble strips, raised lane markers, and speed bumps, which can communicate information to a driver via tactile feedback through the vehicle. Haptic feedback can thus provide an effective and intuitive mechanism for communicating information to a driver, which can result in an improved situational awareness of the driver.

Apple's granted patent 10,300,760 was originally filed in Q1 2016 and published today by the US Patent and Trademark Office. The patent shows us that the patent application was never made public. It went from filing the application and then receiving a granted patent. So this is the first time that this invention was made public as an invention owned by Apple. You can review the patent here for details and more patent figures.