Earlier today Patently Apple discovered a Project Titan related patent in the European Patent Office that was posted last Wednesday, February 15, 2019 under #EP3482220. The system relates to improving detectability of road signs and vehicles on the road in low visibility conditions like fog or snow with a plurality of retroreflectors. For instance, if traveling on the road in a snow storm and road signs are covered in snow, a retroreflector system, using radar, would be able to read the text under the snow and relate it to the driver on a CarPlay display and/or other device display (iPhone, iPad).

Apple notes that visibility of vehicles on the road is paramount to safety of drivers. In low visibility conditions (e.g., fog, dust, snow or smog), a driver's inability to see other vehicles or road hazards increases the risk of a collision. Vehicles can mitigate the risk of collision by utilizing additional systems such as radar systems, vision-based cameras and light detection and ranging (LiDAR) cameras. Certain road or weather conditions can affect the effectiveness of these systems, such as water vapor absorbing or scattering light, thereby reducing proper detection of vehicles. The effectiveness of these systems can be improved by improving detectability of the vehicles. 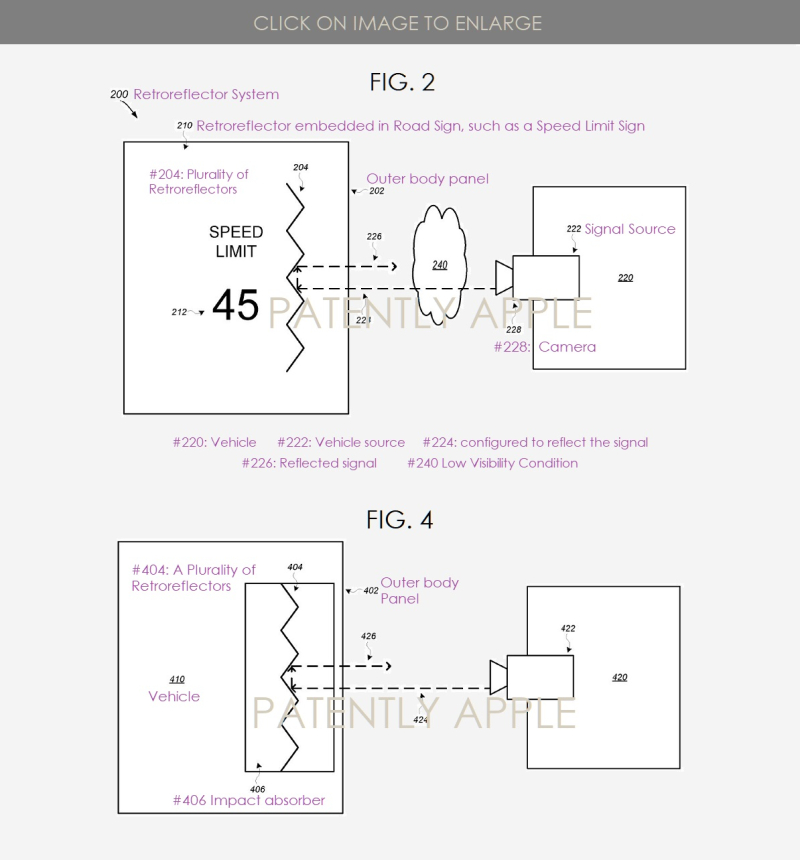 In some embodiments, the signal source (#222) may include an optical sensor, such as a camera, to read the text on the road sign (#210). However, the camera may not be able to read the text when a low visibility condition (#240), such as fog, rain, snow, ice, nighttime, dirt, mud, a dust storm, haze, smog or any other visibly obstructive condition.

Apple notes that "A representation of the text as reflected by the signal on the plurality of retroreflectors may be rendered by the vehicle and displayed to a passenger on a display device."

While Apple isn't specific about the display device, in another area of the patent, the devices would seem to include an iPhone, iPad or the display in an infotainment system such as CarPlay.

This is obviously an invention looking many years down the road. Technology companies are likely in the process of working with U.S. state and Canadian provincial governments on the development of next-gen road sign technologies that will be able to communicate with semi and fully autonomous vehicles being developed by companies such as Apple, Google, Tesla, Ford and others.

Apple couldn't create such a system without it being a part of a much larger interconnected system created by governments in regards to future road systems.

Apple's patent application that was published by the European Patent Office this past Wednesday was originally filed back on September 20, 2017. The priority U.S. patent was filed in September 2017. Considering that this is a patent application, the timing of such a product to market is unknown at this time.

Side Note #1: While the patent doesn't cover the system using Siri, it would stand to reason that over time this feature could be extended in the patent via a continuation so as to allow Siri to call out road signs ahead of time so that the driver could keep their eyes on the road. For instance, during a snow storm, Siri could be set to communicate with a driver, such as stating: "At the next intersection there is a stop sign."

An alternative system would be to have road sign information appear on a Heads-Up display windshield system or an Augmented Reality Windshield.

Side Note #2: While Apple's patent FIG. 4 above describes the radar system being alternatively built into a vehicle's bumper, the patent doesn't expand on the value of the system in that position other than a brief statement in the first overview paragraph at the top of this report about the inability for drivers to see vehicles and "road hazards" ahead.

In low visibility road conditions like fog and snow, there are times when drivers could barely see 30 feet ahead of them. Every year we hear of 10 to 70 car pile-ups on the highway due to poor visibility like the one presented in the video below.

By having a radar system as described in Apple's patent filing, it would theoretically be able to communicate with the driver that there's a danger in the road ahead to assist the driver slowdown in time to change lanes and/or get off the road to avoid a major collision.