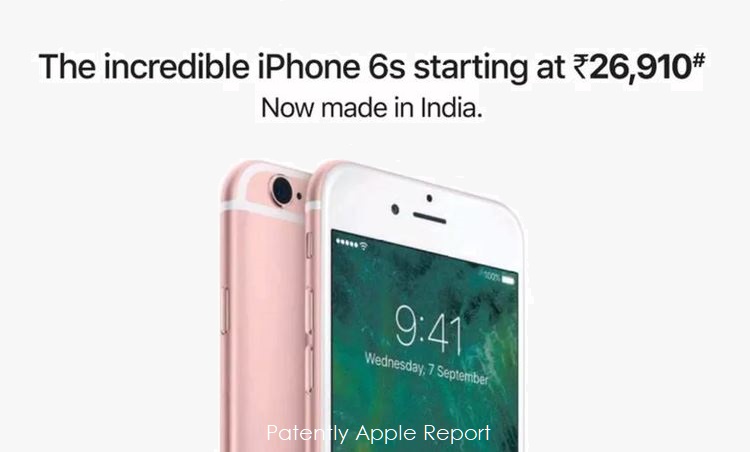 Patently Apple posted a report a year ago that Apple supplier Wistron had begun a Trial Run of the iPhone 6s Plus and could begin full Production in May. Today's cover graphic shows that Apple is promoting the the fact that the iPhone 6s is "Now made in India." The ad was first discovered by the owner of fonearena.com and posted on his personal Twitter site here. The iPhone is selling for 26,910 Rupees or roughly US$383. This price is where the battleground is for smartphones in India and other emerging markets.

The Indian Government's business initiative "Make in India" was launched on September 25, 2014 to encourage companies to manufacture their products in India with dedicated investments. Those making products in India promote it in the form of "Made in India" as Apple has done. This is to show the local population that the government is hard at work forcing foreign companies like Apple to make the commitment to invest in the Indian economy by helping to put Indians to work in manufacturing plants. The official logo of "Make in India" is presented above.

During Apple's fiscal Q2 2019 Financial Conference Call held at the end of April, Apple's CEO stated the following during the Q&A session:

"I think India is a very important market in the long term. It's a challenging market in the short term but we're learning a lot. We have started manufacturing there which is very important to be able to serve the market in a reasonable way. And we're growing that capability there and we would like to place retail stores there and we were working with the government to seek approval to do that and so we plan on going in there with sort of all of our might.

We've opened a developer accelerator there which we're very happy with some of the things coming out of there. It's a long term play. It's not something that's going to be an overnight huge business. But I think the growth potential is phenomenal and it doesn't bother me that it's primarily an Android business at the moment because that just means there's a lot of opportunities there."