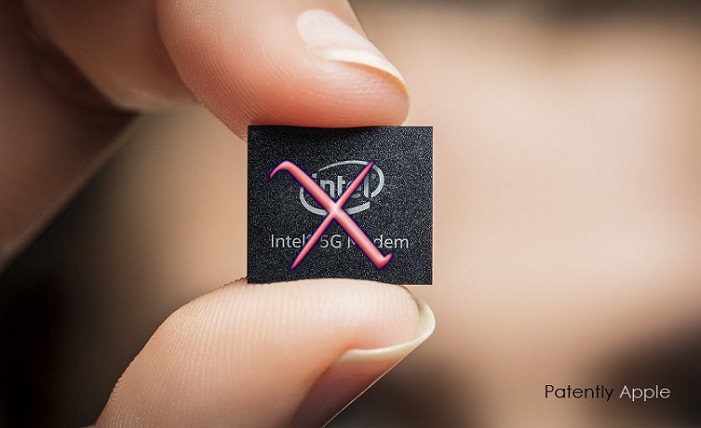 Last month Patently Apple posted a report titled "The Apple-Qualcomm Chipset Deal Forces Intel's 5G Plans to Shift from a Smartphone Focus to PC's and other Devices" In that report we posted commentary by Intel's CEO that they were basically bowing out of the 5G market for smartphones without having an anchor customer like Apple to work with. While that was a politically-neutral statement to make, there was obviously some friction with Apple behind the scenes that neither side wanted to air in public while the Apple-Qualcomm case was still in progress.

It was reported back in April that "Apple supply-chain executive Tony Blevins said in his testimony in a Qualcomm-Apple trial that the company had looked into 5G chipsets produced by Samsung and MediaTek as part of an initiative called 'Project Antique' because it didn't want to rely on a single vendor. "The entire concept of Project Antique was to find a second supplier," Blevins testified. "No offense to [Intel] but we don't want to be single-supplier with them."

That statement from Blevins was very telling of a problem Apple was having with Intel behind the scenes. Why? Because when the Apple-Qualcomm announcement was made on April 16, it included a multi-year 5G chipsets deal. More than likely Qualcomm will be Apple's only 5G chipset supplier as they had been in the past or else Intel would have likely hung on to battle it out for business. So Blevins statement gave us a heads-up about the assessment that Apple's team had of Intel. It was a lack of confidence in Intel being a single-supplier.

Today The Information news site helps us to fill in the blanks in that story line by stating that "Johny Srouji, the Apple executive in charge of building chips for the company’s devices, was fed up with Intel."

The Exclusive from The Information starts their report by going back to early 2017 when "Apple was preparing a new line of iPhones to be released the next year, but the Intel modem for the devices, known as the 7560, wasn’t working properly, according to two people with knowledge of the relationship.

The new iPhones would mark the first time Apple would rely exclusively on Intel for modems—a chip that handles the cellular connectivity in phones—instead of those from its longtime provider, Qualcomm.

Intel had already overhauled the modem four times to bring it up to par with the latest Qualcomm modem. But missed deadlines and continuing technical issues with the chip were making Apple executives anxious, said one of the people.

Mr. Srouji barked at his Intel counterpart, Venkata 'Murthy' Renduchintala, during a meeting on Apple’s campus by stating that "This would have never happened at Apple under my watch," according to a person who was present at the meeting.

That episode offered new insight into Apple’s fraying relationship with Intel, a high-profile alliance that was splintered publicly when Apple said that it would resume buying modems from Qualcomm as part of a wider high-profile legal settlement between the companies as I pointed out at the top of this report.

The Washington Post reported back on April 19th about an internal Apple memo that Qualcomm brought to light during the trial. The report stated that back "In a March 2015 email that was part of the sealed documents, Apple’s vice president of hardware, Johny Srouji, wrote of Qualcomm technology, "Engineering wise, they have been the best."

The Information further noted in their report that "The breaking point in the Apple-Intel relationship came in the development process for a modem designed for 5G, a new generation of wireless technology that promised to greatly accelerate mobile internet speeds. Throughout 2017, Apple was an active participant in the development of Intel’s first 5G modem, called the 8060, sitting in on technical reviews on Intel’s campus throughout the design process, said two people with knowledge of the process. The Apple delegation at the meetings was headed by Bernd Adler, who worked at Infineon and Intel before joining Apple in 2015 to head wireless systems engineering.

During those reviews, Mr. Adler’s team expressed early skepticism about Intel’s reassurances that it could deliver the 5G modem on time because of past problems, said one of the people.

Apple also didn’t see Intel’s 5G modem architecture and software algorithms as ready, the person said. Eventually, Intel produced a working prototype of a 5G modem, but the chip’s design was big, making it expensive to produce. When Intel announced the 8060 in November 2017, Intel said it would be ready by mid-2019.

But a year later, Intel announced it was canceling the chip and shifting its efforts to the development of another 5G modem, the 8160. To learn more about this, read the full report from The Information here.

Whether Apple is seriously committed to engineering their own future 5G chips in the future is in question at this point in time. The story is bound to resurface as their new Qualcomm deal nears its end. Rumors at this point in time about future developments of 5G chips would simply be noise in the wind.