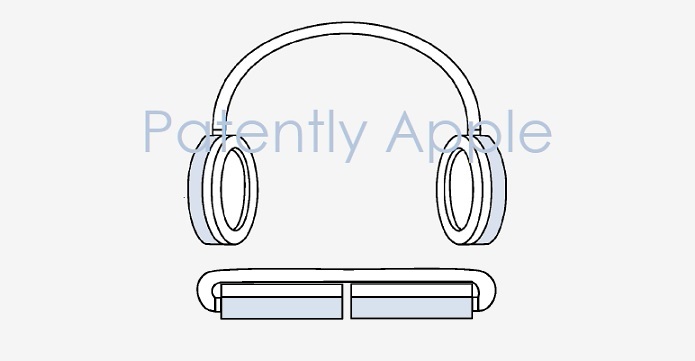 This weekend Patently Apple discovered a patent application of Apple's in the European Patent Office database which covers possible future features for their over-the-ear headphones.  The patent points to touch inputs on the earphones to control functionality and a unique collapsible form factor that will allow the headphones to be easily portable in a headphone carrying case. Apple's invention describes several improvements on circumaural and supra-aural headphone frame designs.

One solution to the large headband form-factor problem is to design the headband to flatten against the earpieces.  The flattening headband allows for the arched geometry of the headband to be compacted into a flat geometry, allowing the headphones to achieve a size and shape suitable for more convenient storage and transportation.

In some embodiments, the stem can include an over-center locking mechanism that prevents inadvertent return of the headphones to an arched state without requiring the addition of a release button to transition the headphones back to the arched state.

Apple's patent FIG. 9A below shows an earpiece of headphones positioned over an ear of a user; FIG. 9B shows positions of capacitive sensors beneath a surface and proximate ear contours associated with the ear. 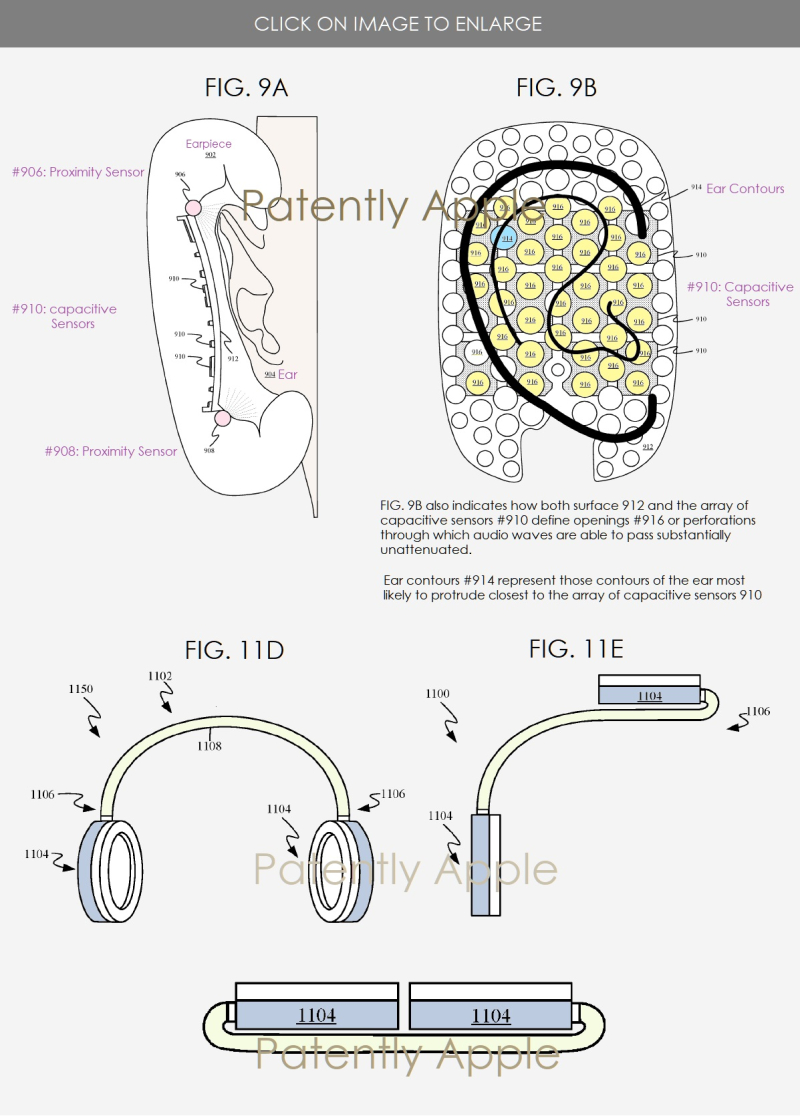 Apple's patent FIGS. 1lD – 11F above show how earpieces #1104 of headphones #1150 can be folded towards an exterior-facing surface of deformable band region #1108. FIG. 11D shows headphones in an arched state.  In FIG. 11E, one of the earpieces is folded towards the exterior-facing surface of deformable band region. Once earpiece #1104 is in place as depicted, the force exerted in moving the earpiece to this position can place one side of the deformable headband assembly #1102 in a flattened state while the other side stays in the arched state.  In FIG. 11F the second earpiece #1104 is also shown folded against the exterior-facing assembly.

Apple's patent FIGS. 12A and 12B below shows us another view of headphones that can be transitioned from an arched state to a flattened state by pulling on opposing sides of a spring band. 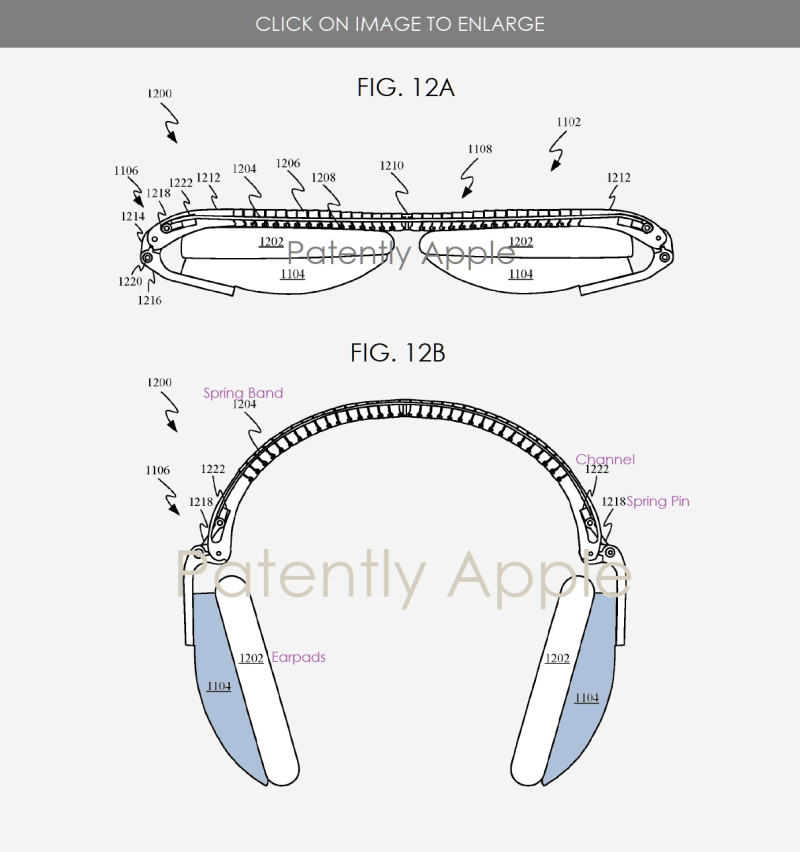 Apple's patent FIGS. 16A and 16B below show us another headband assembly in folded and arched states. 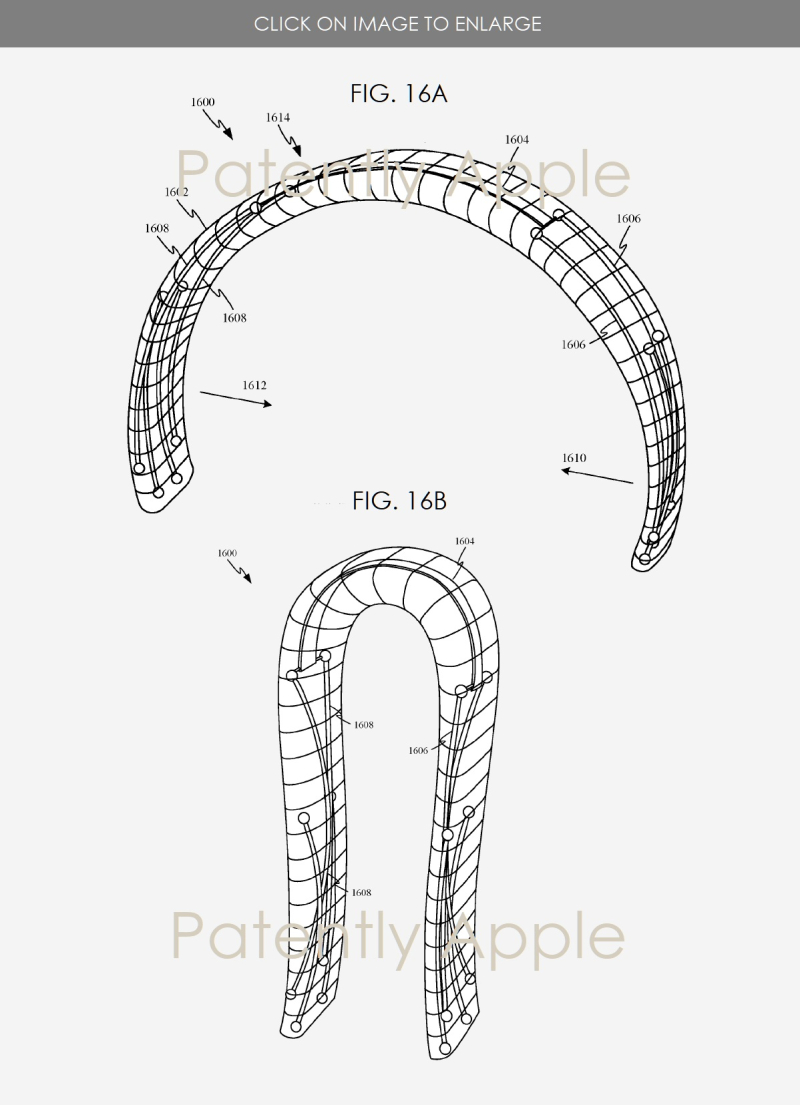 As part of an anti-Buckling Assembly we find and interesting feature in patent FIG. 23A below which shows us an exploded view of components associated with a data plug which is seen as a lightning connector; in patent FIG. 23B we're able to see a fully assembly of telescoping member with threaded fastener fully engaged within a threaded opening in order to keep a data plug securely positioned. In this patent figure it looks like a USB data plug as an alternative to a lighting plug or connector. 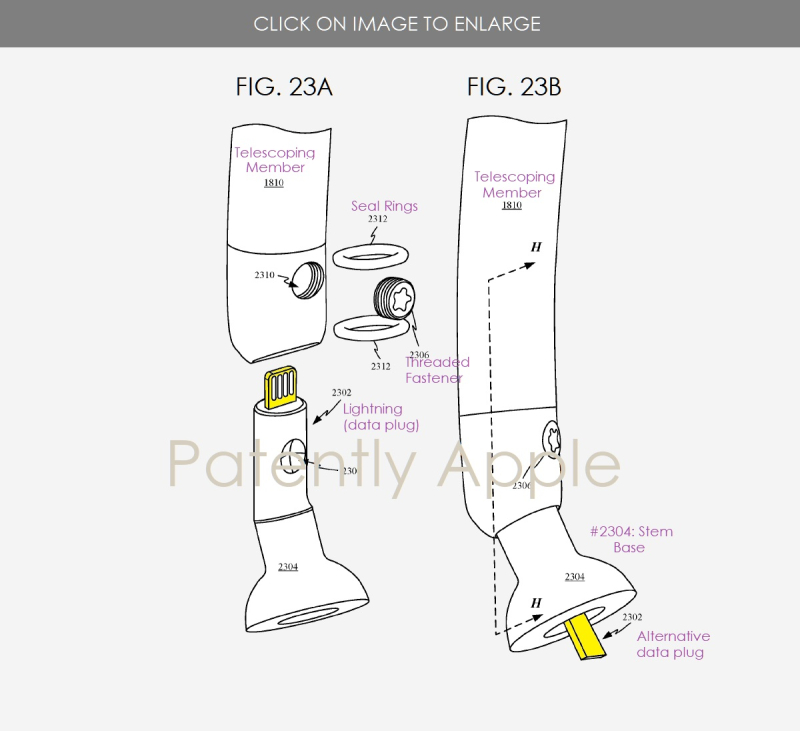 Apple's patent FIG. 27B shows an exterior of the earpiece with an input panel removed to illustrate the shape and size of an interior volume associated with a speaker assembly; FIG. 28 shows an earpiece having an input panel, which can form an exterior facing surface of earpiece; FIG. 29A shows us a perspective and view of an outline of an earpiece illustrating a position of distributed battery assemblies within the earpiece. 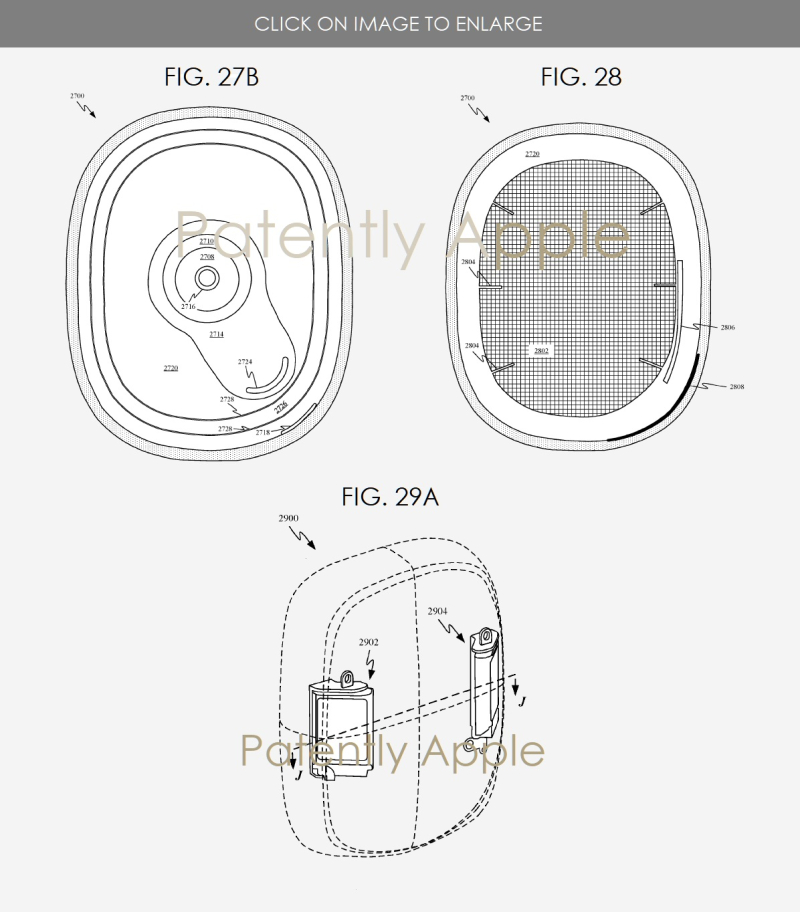 Apple notes that input touch panels can be affixed to a flat outward facing surface of headphones. Input panels can define a touch sensitive input surface allowing users to input operating instructions into headphones such as to stop or play media. Other potential touch inputs are not mentioned so that they could be a surprise when the headphones come to market.

Apple's patent FIG. 30B below shows us an exemplary carrying storage case #3016 well suited for use with circumaural and supra-aural headphones designs. Case #3016 includes a recess #3018 to accommodate a headband assembly and two earpieces.  The portions of recess that accommodate the earpieces can include protrusions #3020 and #3022, which fill recesses of earpieces sized to accommodate the ear of a user. 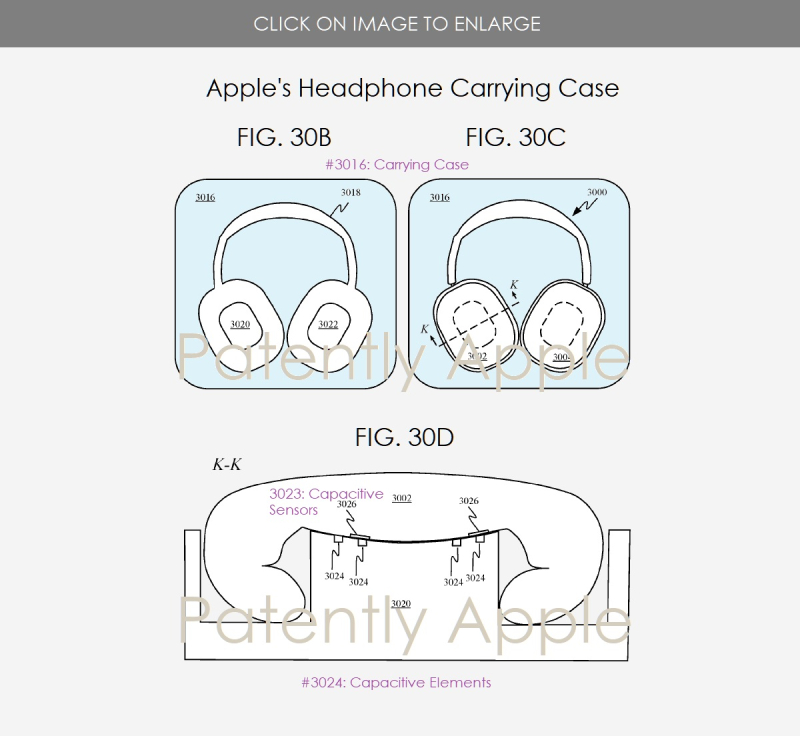 Apple's patent FIG. 30C above shows headphones #3000 positioned within a recess and FIG. 30D shows a cross-sectional view of earpiece #3002 in accordance with section line K-K of FIG. 30C. FIG. 30D shows how protrusion #3020 include capacitive elements #3024 arranged along an upward-facing surface of the protrusion in a predefined pattern. Consequently, when headphones are placed within the case and capacitive sensors #3026 sense capacitive elements in that predefined pattern the headphones can be configured to shut down or go into a lower power mode to conserve power.

Apple's patent application that was published in Europe on May 23, 2019 by the European Patent Office was originally filed back in Q4 2018. There were 33 Apple engineers credited for this headphone invention. Considering that this is a patent application, the timing of such a product to market is unknown at this time.