Today Apple's CEO was the first guest to be interviewed at the Time 100 Summit hosted by Nancy Gibbs one time Editor-in-Chief at Time who is now a Visiting Professor at Harvard Kennedy School.

Whenever Steve Jobs spoke in interviews you could count on the conversation being focused on Apple, its products and perhaps the next great thing. With Tim Cook, you could count on him wanting the conversation to lean towards "Company Values" and philosophy, immigration, human rights and so forth. If that's why you like Tim Cook, then you'll certainly enjoy this interview.

While the majority of the conversation was about company values, there were a few other topics discussed such as Cook wishing he could go back in time and push the case on privacy with the FBI.

He also repeated that he believes that when all is said and done, Apple will be remembered for what they did for health. Of course some of us will remember Apple for Steve Jobs being the driving force in technology and how the internet in your pocket via iPhone changed communications forever.

UPDATE 3 p.m.: Time Magazine has pulled the plug on the replay video of Tim Cook's close to 15 minute interview that was available earlier today. 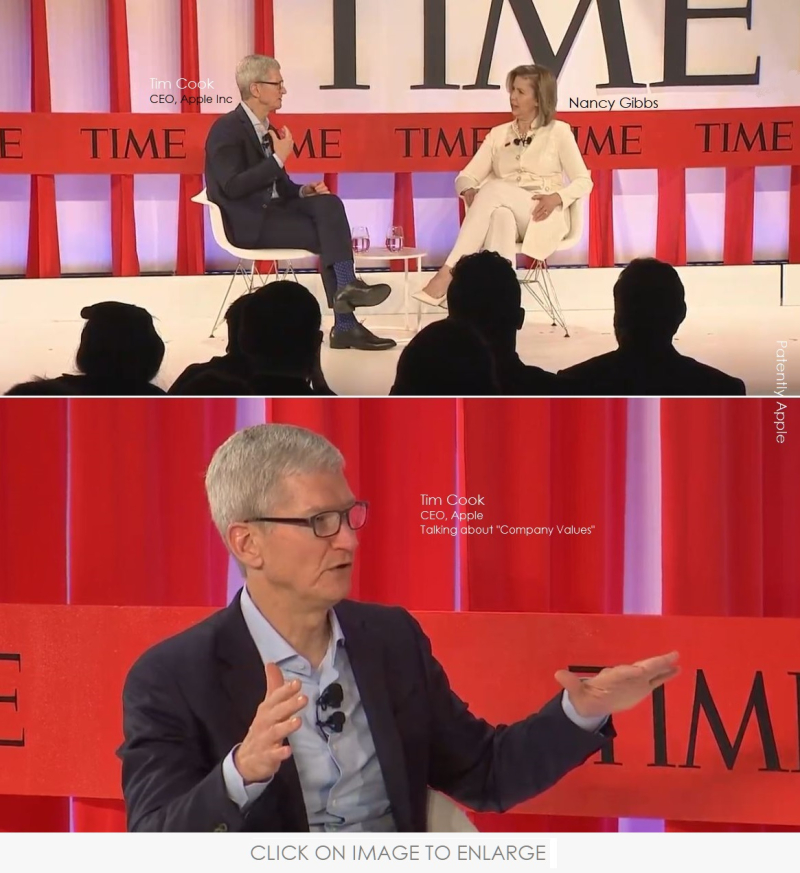 One More Thing:  last week ex-Apple veteran inventor Imran Chaudhri who was instrumental in the iPhone's interface sat down with Scott Galloway, a professor of marketing, as guests of Fast Company’s first annual Impact Council to debate ethics in design.

Imran noted that "In the early days of designing the phone, 'we talked about the idea that you can limit the amount of screen time, and we had an awareness that this was going to be an issue for a long time. The motivations behind not doing it were propelled by the App Store economy."

He explained that the company’s profit motive—getting more users to download more apps—outweighed concerns about the potential impact of all that engagement."

Today in Cook's interview he seemed to go out of his way to contradict Chaudhri. Cook stated that "Apple doesn’t want to keep people glued to the phones in their pockets, which is why they have developed tools to help users keep track of the amount of time they spend on their phones.

Cook added that "Apple never wanted to maximize user time. We’ve never been about that. We’re not motivated to do that from a business point of view, and we’re certainly not motivated from a values point of view." I swear I saw Cook's nose grow right before my eyes (ha!).