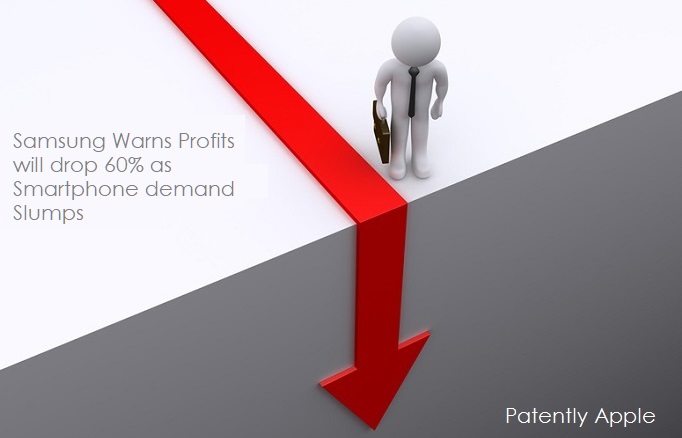 In January Patently Apple posted a report about Samsung Electronics' Q4 operating profit took a nose-dive close to 40%.  On March 6th we reported that Galaxy S10 sales were tepid. On March 20th we further reported that Samsung had admitted that they were in crisis mode with global smartphone stagnation, even though it was really about how Huawei, Oppo, OnePlus and Xiaomi were attacking Samsung's key markets and winning. With a dark cloud like that hanging over their head it shouldn't be a surprise to learn that Samsung is now warning that profits will drop 60% in Q1.

CNN is now echoing a Korean report today that Samsung has stated that "it expects operating profit for the first quarter to plunge by 60% compared to the same period year ago.

Samsung warned last week that its earnings would be hit by slowing demand for memory chips and display panels, a sign that device makers and their suppliers are coming under pressure.

It expects to report a sales decline of roughly 14% when full earnings are published later in April.

Samsung is the world's biggest seller of smartphones. But it also has a huge business making key components for rival handset manufacturers." For more on this read the full CNN report here.

Patently Apple posted a report late yesterday titled "If Apple needed 5G Chipsets, Samsung's System LSI Business is now open for Business and Mass producing them." With sales in such a slump, as being reported today by CNN, it's clear that Samsung would go out of their way to earn Apple's 5G modem business for a 2020 iPhone, contrary to a rumor this week that Apple would have to delay a 5G iPhone until 2021.