Yesterday the U.S. Patent Office published a patent application from Samsung that relates to a completely new form factor for a TV remote controller along with new and updated features such as advancing Bixby that could easily provide users with channel-groups for faster access to what they're looking for and a new way of sending commands to their Smart TV with this remote.

However, in a case in which the utterance is started at the very same time as when the speech recognition button was pressed, it is highly possible that the initial command or a part of it wasn't captured.  In addition, when a thumb is removed from the speech recognition button prior to the utterance ending, the remote doesn't recognize a complete sentence and therefor an error is registered and the user has to waste time repeating their request.

The second problem with today's remote controllers is that the form factor is a stick forcing users to point the remote at the TV for it to control various features be it sound or changing a channel.

Samsung's invention overcomes these two outlined issues. In fact their solutions are quite simple. If a user is going to pick up the remote to press a button to send a voice command, Samsung simply put a motion sensor into the remote so that when the user picks up the remote, the voice recognition is immediately turned on awaiting a command.

In addition to a motion sensor, Samsung may also use both hover and grip sensors to ensure that using voice commands is effortless and accurate. Either way, having to press a button on the remote to send a voice command will be eliminated.  After picking up the remote the user will be free to immediately tell Bixby, go to "Netflix," "Apple TV+," "Hulu" or "Amazon Prime" and so forth.

Once the remote is no longer in the user's hand, the grip sensors will communicate to the microphone to instantly power down.

Samsung's patent FIG. 3C below presents a possible version of their next-gen TV remote that's circular with a new LED interface with a touch surface that could recognize touch force, swipe actions and so forth.

The illustration below shows a microphone positioned at top center along with a 'Feedback Unit' (#190) and a 'Button Unit' (#195). The 'Feedback Unit' may include a plurality of LED lights that will provide specific communications to the user as presented further below in patent FIGS. 9A, 9B and 9C. 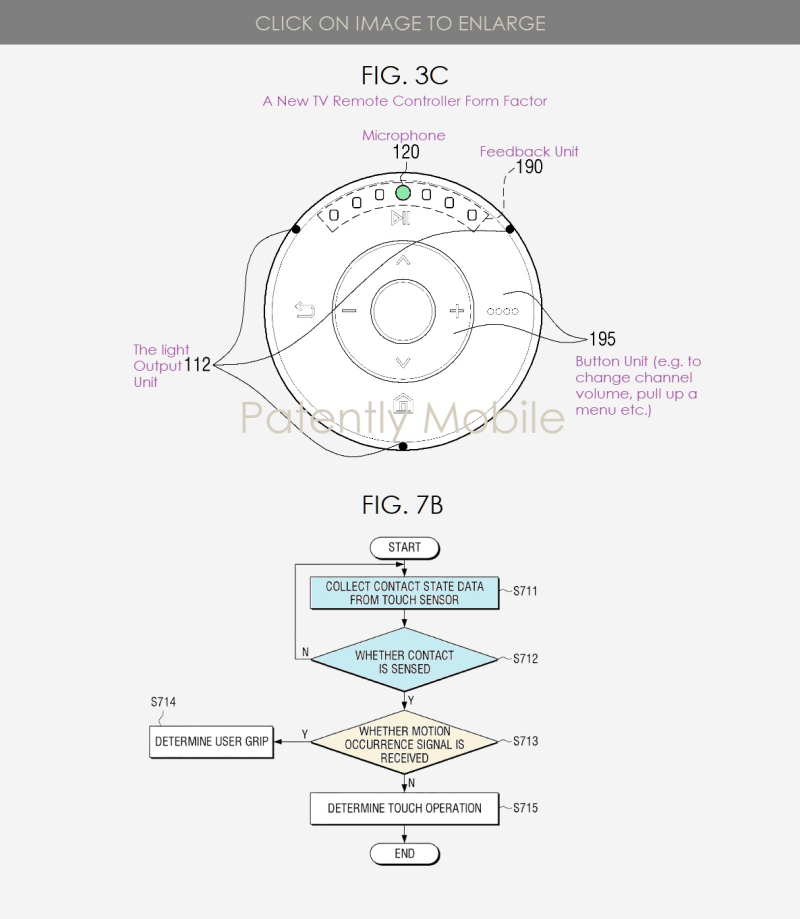 Samsung's patent FIG. 7B above is a diagram illustrating in detail a step of carrying out a touch analysis algorithm, operation.

The remote won't be limited to IR output. Samsung lists "communicator" options such as wireless methods such as Bluetooth, WiFi, Zigbee and may further use NFC and USB.  The user will no longer have to aim the remote at the TV in order to change a channel or volume, which deals with the second problem that the invention was to address.

Samsung further notes that a pairing process between two apparatuses may be performed. For example, when the preset event occurs in the input device (TV Remote) or the electronic device (TV), the communicator may search for peripheral devices through, for example, a digital living network alliance (DLNA) technology and may perform a pairing with the found device to be in the interlocked state.

When a user makes a voice command, various lights will be seen flashing to acknowledge that the command is being processed.

The voice system may also be used to group channels for easier access. For instance, the user may send the command "News Channel" generically and the TV user interface will provide the user with a list of news channels to choose from. Over time, the system using Machine Learning may even list channel groups showing user preferences.

While Samsung doesn't expand on this theme, more than likely this may be extended other categories such as sports, music, streaming channels, drama channels, comedy channels and so forth. It's an interesting idea and possibly a time saver. 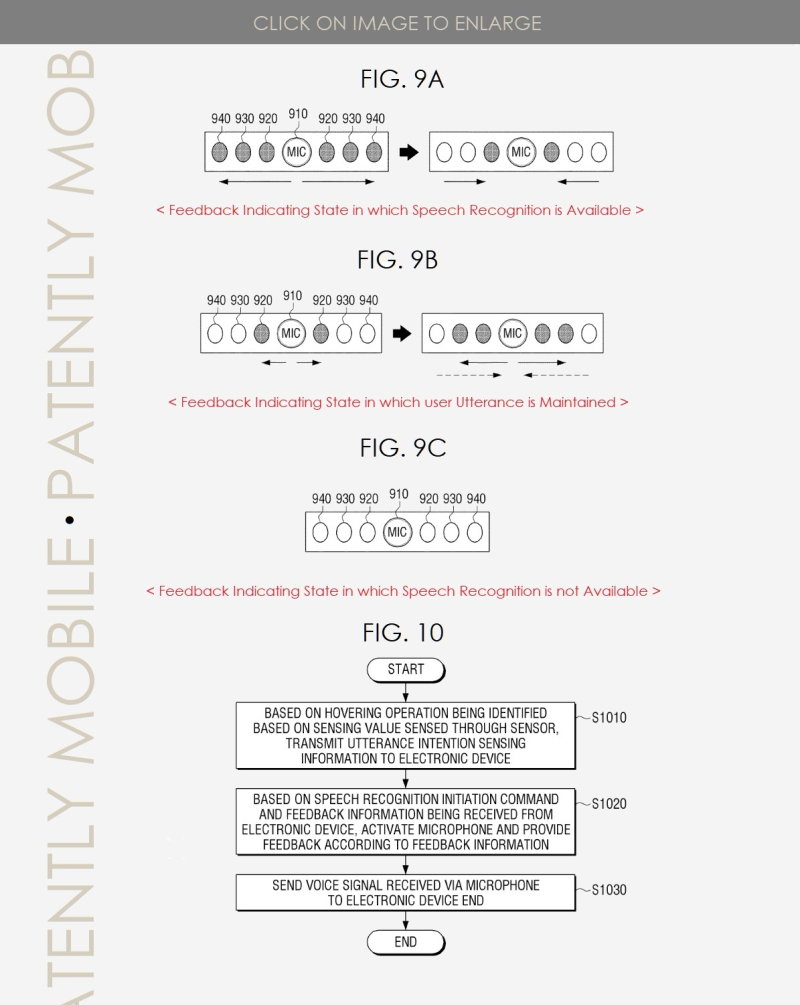 Samsung originally filed for this patent in Q3 2018. Considering that this is only a patent application, the timing of such a remote to market is unknown at this time.

One of Samsung's inventors is Kihyun Yoon, Principle Engineer. Oddly one of his listed skills and/or projects listed is "Apple iPhone 3GS/4 camera algorithm." His work history shows that he's never worked at Apple. Another inventor is Minsup Kim, System Engineer, Project Leader in Korea with experience in TV R&D and New Device Interaction Strategy. Kim attended Indiana University U.S.A. for his MBA his Master of Business in Korea and engineering in Korea.