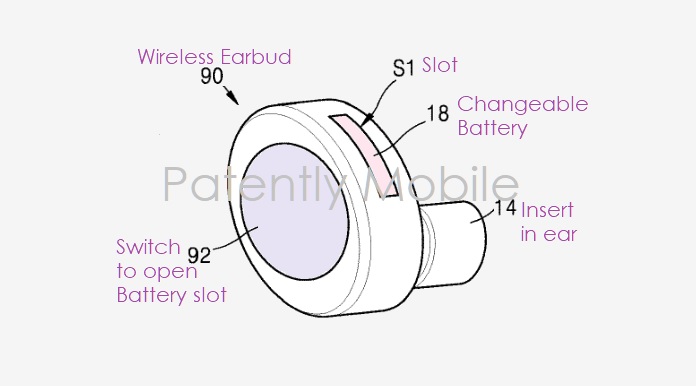 Today the US Patent & Trademark Office published a patent application from Samsung that relates to earbuds, and more particularly, battery changeable-type earbuds where users will be able to use changeable coin-cell batteries. Better yet, Samsung's invention claims that their future wireless Galaxy Buds will provide users with the ease of continuously using their buds even while they're in the process of changing the battery.

Our cover graphic represents Samsung's patent FIG. 9 which is a perspective view showing an exemplary embodiment of a battery changeable-type wireless earbud #90.

The wireless earbud shown above has a button or switch #92 with which an operation of the battery changeable-type wireless earbud is performed or controlled. The switch/button is pressed to turn the earbuds on and off and will also be used to open the battery tray slot.

One added twist to this invention is that Samsung may offer an alternative wireless earbud design wherein there could be a mini jack added to their earbud design so that users at home could plug their earbuds into a charging case so as to not waste battery life.

Samsung's patent that was published by USPTO today was originally filed back in May 2018.

Teardown experts' iFixit reviewing AirPods 2 stated: "Turning our attention to the brawn, we find the familiar 93 milliwatt hour battery in each bud. That's less than half the capacity of the coin-cell batteries in the Samsung Galaxy buds."

With Samsung's future changeable coin-cell battery based wireless earbuds in the works, Samsung will have a powerful advantage over AirPods and one that most Apple fans would love to have.

While it's just a patent filing at the moment with no guarantee of it ever materializing, Samsung would love nothing more than to deliver a feature that Apple fans want but are unlikely to get in the foreseeable future.