In their War with Google Play, Apple is Spending Big Time on their upcoming Video Game Service 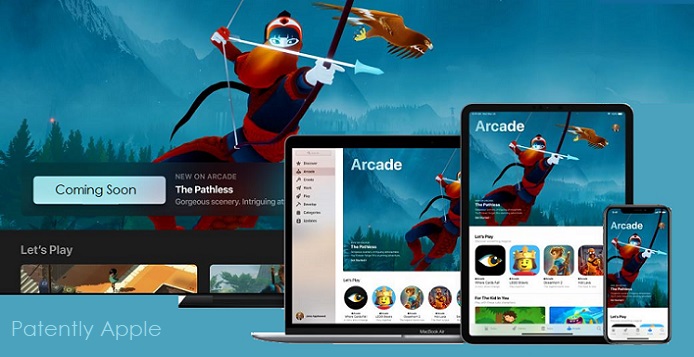 According to several sources familiar with the matter, Apple is spending hundreds of millions of dollars to secure new video games for its forthcoming Arcade subscription service, according to the Financial Times. The reports suggests that the real war is between Apple and Google with both companines going full tilt to take online gaming to the next level.

The report notes that "While the public may be paying more attention to Apple's star-studded push into Apple TV+ and Apple News+ at the moment, Apple's substantial outlay to developers shows how seriously Apple is taking games as a new source of subscription revenues."

Tim Bradshaw, reporting for the Financial Times adds that "It also reflects the increasing competition in Silicon Valley for exclusive rights to the best content, as the iPhone maker bids against other new games platforms from Google and Tencent, as well as the console makers Nintendo, Sony and Microsoft.

Several people involved in the project’s development say Apple is spending several million dollars each on most of the more than 100 games that have been selected to launch on Arcade, with its total budget likely to exceed $500m. The games service is expected to launch later this year.

Apple is offering developers an extra incentive if they agree for their game to only be available on Arcade, withholding their release on Google’s Play app store for Android smartphones or other subscription gaming bundles such as Microsoft’s Xbox game pass."

Interestingly Bradshaw points out that "As well as giving a boost to its services business, Apple’s main ambition with Arcade is to win back the advantage in games that it used to hold over Google Play.

Today, Android’s much larger share of the global smartphone market means that big developers typically launch their titles on both stores simultaneously." Apple is trying to get exclusivity back on their side.

Patently Apple: While Apple's Arcade will do smashingly well with iOS fans, Google's coming Stadia has the potential of handing Google the lead in online gaming. The key is that Stadia is a cross platform gaming solution that developers have only dreamed of since online gaming began.

Any device running the Chrome browser (Android, iOS, Windows, TV) will be able to access Google's Stadia without needing high-end GPU power to play high-end games like Assassin's Creed Odyssey and the next generation of Doom.

With that said, the Financial Times chart shown below shows us that Apple's Arcade gaming service is expected to drive more subscription revenue for Apple than Apple News+ and Apple TV+ over time. My only disagreement with the chart is that I don't think it'll take Apple's Arcade 25 years to achieve best service revenue maker status for Apple. 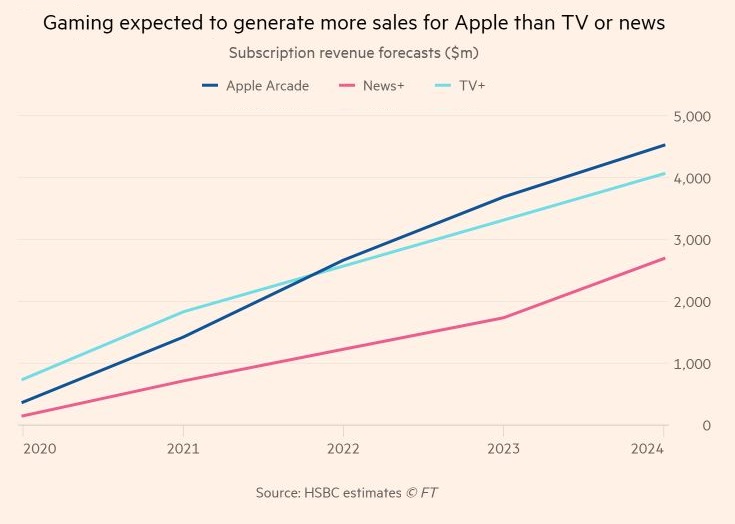 One more thing: While many critics have written off the Apple TV+ service as being "too little too late" (01, 02, 03 and 04), I think it's far too early to make such predictions. I for one subscribe to Netflix, but I'm on the cusp of pulling the plug on this service that offers way too much foreign content with overall content being B rated at best in my view. And that interface, don't get me started. Hopefully Apple TV+ will bring some sanity to TV service interfaces.

At the moment, I don't think any of the new TV services have it right just yet. So it's going to take much longer to judge if Apple TV+ is a winner or loser. Who knows if things like VR content could give Apple the edge over time. It's something that most critics don't even have on their radar screens yet.  So this rush to judgment on Apple TV+ is simply too early to take seriously.