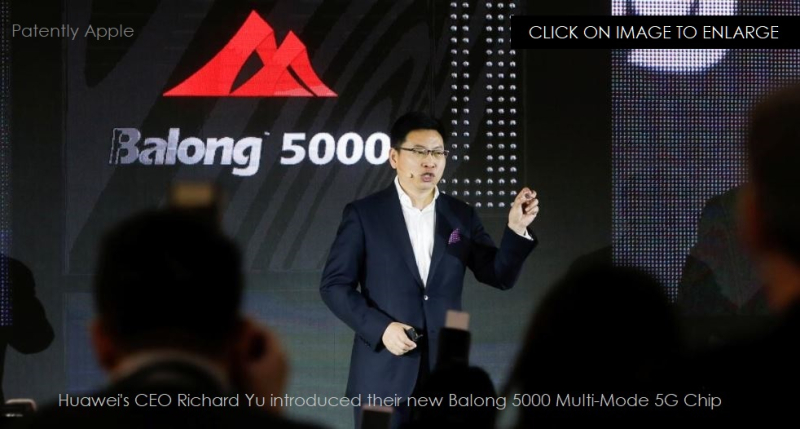 2018 began with the U.S. Government attempting to stop Huawei from entering the U.S. Market via AT&T. AT&T in fact dropped Huawei. Then last August President Trump signed a bill banning government use of Huawei and ZTE technology. With foolish rumors circulating of late that Apple has been unable to secure supplies of 5G modems that would push a 5G iPhone out to 2021, Huawei thought that they'd laugh in Apple's face by offering them exclusive access to their 5G Balong 5000 chip modems. With all the pressure on Huawei from the U.S. Government, they've proven to have a sense of humor, though at Apple's expense.

Earlier today Engadget posted a report titled "Huawei is ‘open’ to selling its 5G modems, but only to Apple." The report notes that "for years, Huawei has been developing its own high-powered processors and modems, all to power its big portfolio of mobile devices. And so far, the company has refused to sell any of those to its competitors. We've learned, however, that the company might be softening that stance. A source with knowledge of the situation has confirmed to Engadget that Huawei is now "open" to selling its 5G Balong 5000 chipsets, but only to one company: Apple.

Although this scenario will never happen for multiple reasons including Huawei working illegally with Iran, Engadet happily played along to gain favor with Huawei. If this never-to-happen storyline happens to interest you, then be sure to check out the full report here.

In late March Patently Apple posted a report titled "Huawei Launched new Smartphones in Paris Today and Announced Gentle Monster Smartglasses coming this Summer." The report covered Huawei's new P20 and P30 smartphones and smartglasses in the form of presentation slides. If you look at the slides you could easily see how Huawei goes out of their way to always compare their new smartphones with Apple's iPhone in an effort t mock them at every turn.

With that context in mind, today's 5G modem offer exclusively for Apple is simply another opportunity for Huawei to mock Apple.