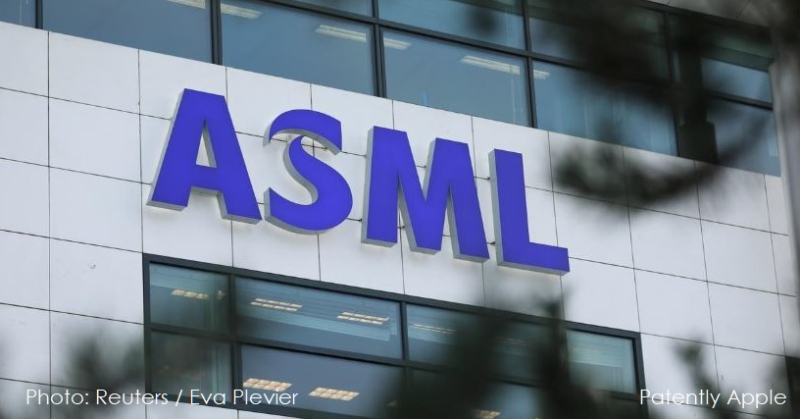 On April 10th, Dutch ASML said it had been the victim of corporate espionage in 2015 involving employees from countries including China. ASML said the perpetrators took "large files" on memory sticks from its Silicon Valley software subsidiary that develops software for machine optimization, according to Reuters. ASML is the dominant maker of lithography systems, used to trace out the circuitry of semiconductor chips. ASML’s major customers include Samsung of South Korea, TSMC of Taiwan and Intel of the United States. The media was stuck on the theft being economic espionage from China.

Yesterday a Dutch news outlet reported that Samsung Electronics was responsible for the 2015 software theft from ASML, the world’s largest chip machinery manufacturer based in the Netherlands. 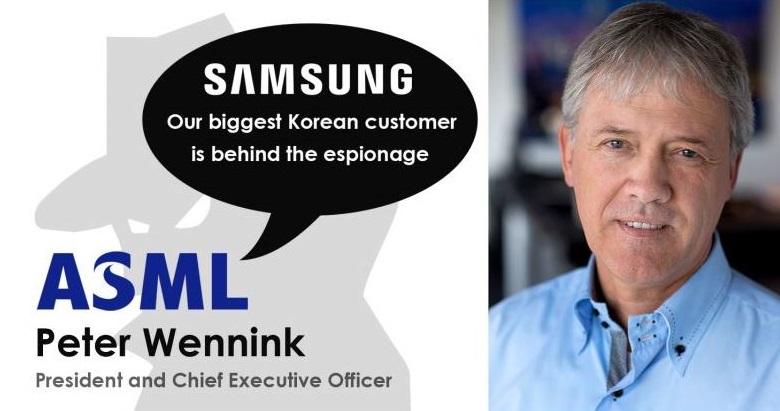 ASML's CEO Peter Wennink revealed in an interview on Dutch television that "our biggest Korean customer" was responsible for the espionage.

Now that ASML's CEO has pointed to Samsung being the culprit behind the espionage, it's unclear how their relationship with Samsung will unfold.

The theft was first reported by Dutch financial newspaper Financieele Dagblad on April 11 (local time). The paper suggested that the Chinese government was behind the theft by saying that it was orchestrated by ASML’s competitor XTAL, a Silicon Valley affiliate of Chinese company Dongfang Jingyuan.

Following the report, ASML denied that it has been victim of 'Chinese espionage.' In a statement released on April 11, ASML CEO Peter Wennink said, "The suggestion that we were somehow victim of a national conspiracy is wrong.

A headline from Dutch financial newspaper Financieele Dagblad's tech sector today (as noted in the graphic-clip from the online newspaper below) translates to: "Samsung distances itself from accusations of ASML chief executive. Samsung has responded negatively to ASML's suggestions that the Koreans were closely involved in the theft of ASML trade secrets." 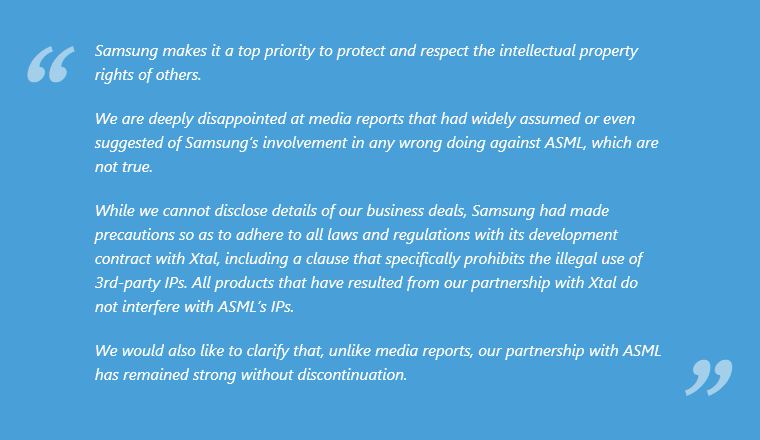 While Samsung's states that "unlike Media reports" our partnership with ASML has remained strong..." the reality of the matter is that ASML's CEO stated that the theft was from their largest customer in Korea, right on TV without any "media" filtering of this news. So Samsung has nowhere to hide on this one. In addition, ASML's CEO hasn't retracted his statement made on TV. It appears that the media didn't get it wrong. Extensive coverage of this story could be found at the Netherlands website LetsGoDigital.