Patent Trolls sue Apple almost every month like this recent patent infringement case filed. These entities purposely purchase patents for a song and dance if they think that a particular Apple patent has weak patent claims that they could drive a Mac truck through with an ignorant jury.

They meticulous study Apple patents and try to seek out patents that they could acquire to miraculously claim that Apple is infringing their intellectual property to jurors that don't know a patent from a pair of slippers.

Today a "continuation patent" patent was published by the U.S. Patent Office regarding Apple's Magic Mouse, that is technically patented as the "Ambidextrous Mouse."

A continuation patent means that Apple wants another facet of their invention covered legally so it could be protected against a patent troll lawsuit or other competitors. The original Magic Mouse was first introduced in October 2009. So what has Apple decided to add to Magic Mouse at this point in time?

Apple has added the verbiage as follow: … "a buttonless object signal is "associated with a gesture." It's now listed four times in their new patents claims as presented below. Another new claim relates to "detecting a pressure exerted on the touch sensitive surface by the object."

Claim #5. The user input device of claim 1, wherein the buttonless object signal is associated with a gesture.

Claim #11. The method of claim 7, wherein the buttonless object signal is associated with a gesture.

Claim #17. The user input device of claim 13, wherein the buttonless object signal is associated with a gesture.

Claim #21. The method of claim 20, wherein detecting that the object is in contact with the buttonless sensing point comprises detecting a pressure exerted on the touch sensitive surface by the object.

Claim #23. The method of claim 19, wherein the buttonless object signal is associated with a gesture.

As our cover graphic proves out, Magic Mouse already works with gestures and the graphic below shows the Magic Mouse setup interface for gestures in macOS. 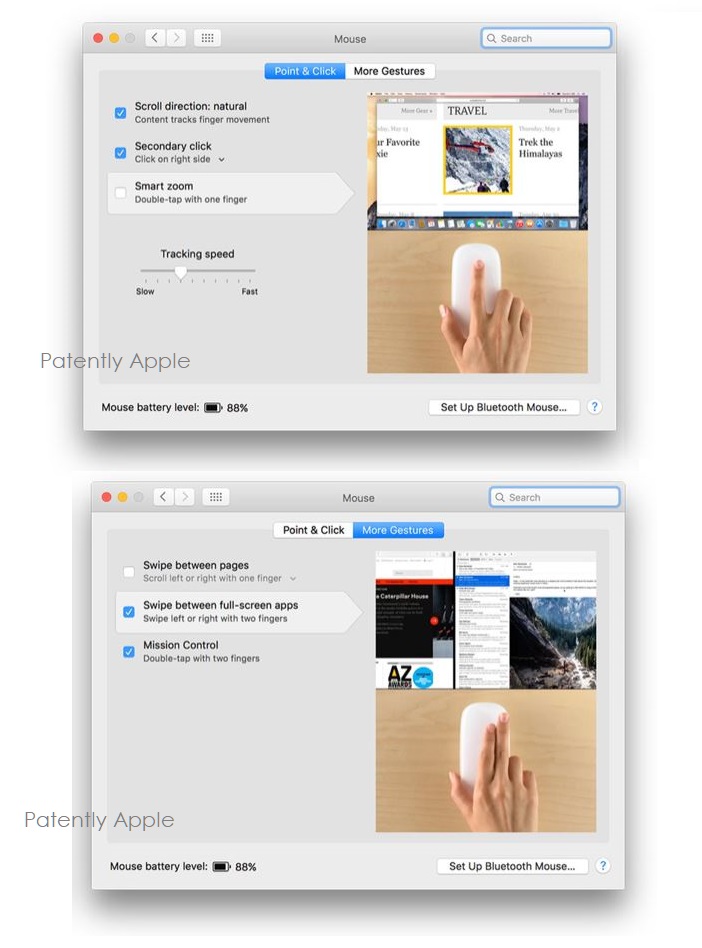 With Apple having been slapped with hundreds of patent troll lawsuits over  the years and having to pay some rather large payouts, it's cheaper for Apple legal to revisit key product patents looking for loopholes and closing them so as to adequately protect their IP and in the process potentially save the company millions of dollars.

For those unfamiliar with continuation patents, this is one example of the benefits awarded to companies like Apple that actually make products; the ability to make updates to past inventions to safeguard them better and to secure changes coming to updated products coming down the road instead of having to file all-new patents.

As a side note, it's unfortunate that ignorant website reporters cover continuation patents as if they're actually new inventions just discovered for the first time just for the sake of gaining clicks rather than reporting on this kind of patent honestly as inventions that are simply being updated with very specific additions that should be listed for review. This scenario plays out each and every week and its fake news of the highest order. Purposely providing the Apple community with false information is a discredit to any news site practicing this kind of reporting.