IDC reported today that the worldwide market for traditional PCs, inclusive of desktops, notebooks, and workstations, declined 3.0% year over year in the first quarter of 2019. While Apple bucked that trend, there wasn't much to get excited about.

Although the shortage of Intel processors, mostly at the lower end, remained a factor in seeing a contraction in 1Q19, the market performed better than expected with most regions exceeding forecast. Stronger than expected desktop shipments further boosted volume, coming on the heels of a tough previous quarter, (4Q18), which had lackluster consumer demand and desktop supply issues. IDC further noted that more PC brands turned to AMD chips.

Apple was basically flat during the quarter with 4.1 million units shipped with close to 7% market share worldwide. Though the company refreshed some of its notebooks recently, the latest models haven't been met with the greatest fanfare as reviews point to hardware issues that may affect sales in the coming months.

The quarterly statistics for U.S. only market share from Gartner shows that Apple fell 3.5% in calendar Q1, fiscal Q2 2019. 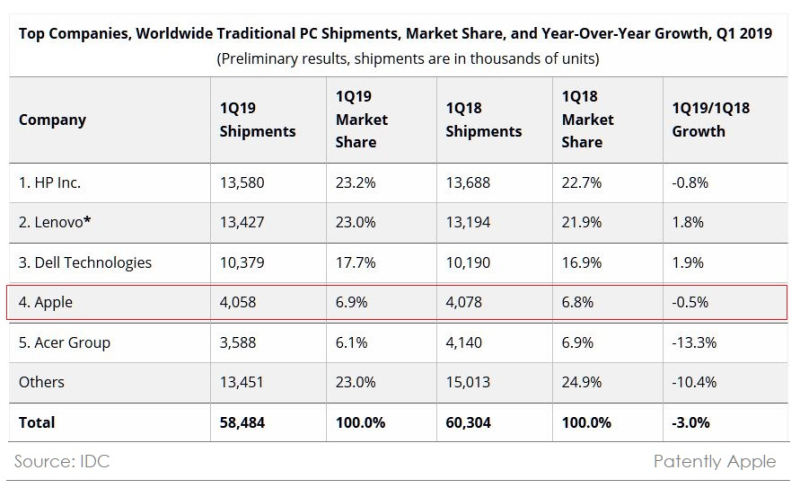 Overall, Tom Mainelli, group vice president for Devices at IDC stated that "The U.S. market saw year-over-year volumes decline in notebooks as consumer demand softened during the quarter, offsetting the modest gains we saw in desktops. Among the top U.S. PC vendors, only Lenovo saw notebook growth from the same quarter a year ago.