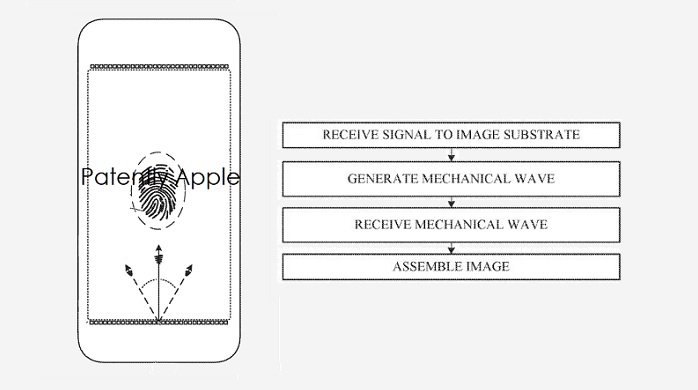 Last month Patently Apple posted a report titled "Apple's Next-Gen Touch ID uses Optical Imaging Sensors under a Display for a Variety of Devices like Apple Watch." Today the U.S. Patent and Trademark Office published another granted patent relating to a possible Touch ID alternative methodology that will allow users to simply touch the display of an iDevice for biometric authentication.

In some embodiments, the acoustic imaging system can employ one or more tomographic reconstruction techniques (e.g., reflection, diffraction, transmission, and so on) to obtain the image of the fingerprint. A tomographic acoustic imaging system includes a controller configured to induce an acoustic pulse or wave within the user input surface. The controller generates the acoustic pulse by applying a drive signal to one or more acoustic transducers then operating in a drive mode. When in the drive mode, an acoustic transducer deforms in response to the drive signal. The drive signal is configured to induce an acoustic pulse (such as a surface wave, shear wave, plane wave, or other acoustic pulse type) that propagates through the thickness of, or across a surface of, the user input surface. In some examples, the acoustic pulse can be a Gaussian pulse, a chirp signal (e.g., multiple periods of varying frequency), a sinusoidal burst (e.g., multiple periods of a single frequency), or any other suitable pulse type or shape. 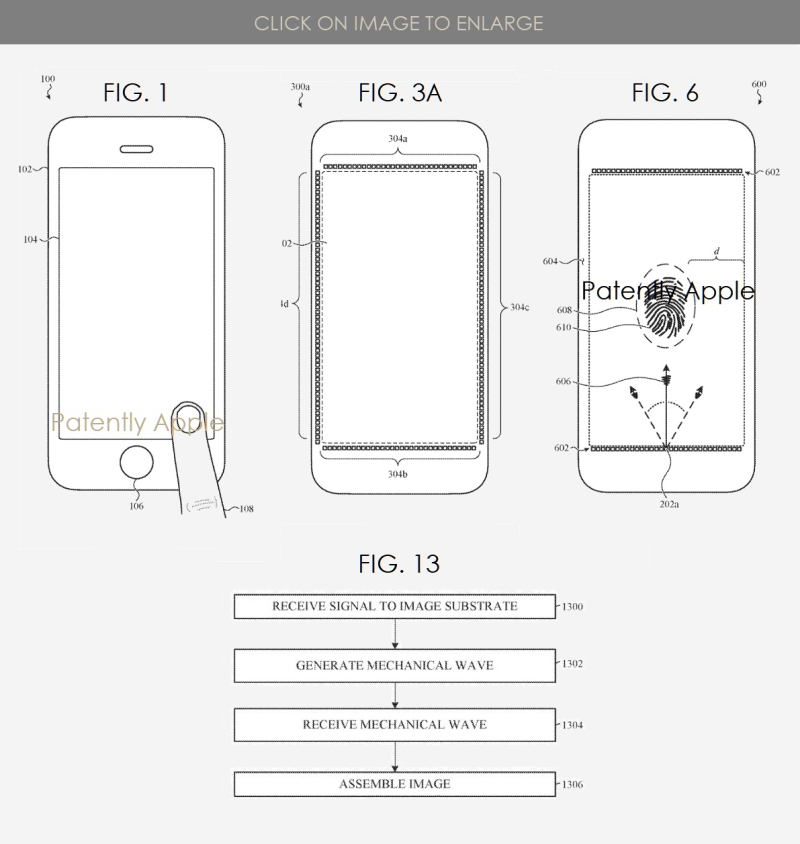 Apple's patent FIG. 13 above is a flow chart that corresponds to a method of operating an acoustic imaging system.

Apple further notes that an acoustic imaging system can be configured to map the biometrically-unique features of a user finger for size, shape, skin patterns, and scar patterns and so on.

Apple also oddly notes, that as far as the iPhone goes, the system could also be used to capture the characteristics of user's ears, map it, and use it as another biometric authentication technique.

Apple later notes that although many embodiments are described in terms of a system and method for generating an image of a user's fingerprint, these systems and methods can alternatively or additionally be used to perform other operations, or to obtain non-fingerprint information, such as, but not limited to: generating an image of a palm; generating an image of an ear, face, or cheek; determining the location of a stylus on an input surface of an electronic device; determining a physiological characteristic of a user such as heart rate, respiration rate, blood oxygenation, and so on; determining characteristics of a non-input surface; determining the force with which a user touches an input surface; determining the location at which a user touches an input surface; and so on. Accordingly, it may be appreciated that the various systems and methods presented below are merely examples and that other embodiments, systems, methods, techniques, apparatuses, and combinations thereof.