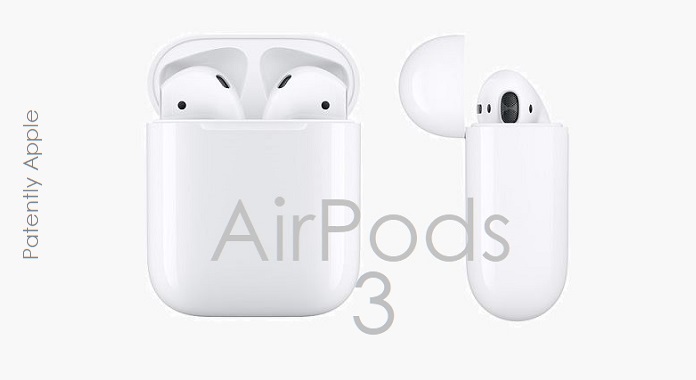 At the top of the month Patently Apple posted a report titled "Apple's AirPods Grabs 60% of the Global Wireless Hearables Market in Q4 2018." To give AirPods a boost going into 2019 Apple launched their AirPods 2 last month with a wireless charging case and more. Today a supply rumor states that Apple could release AirPods 3 in Q4 with the addition of noise cancellation.

Isn't that a little too quick after releasing the AirPods 2 last month? Perhaps, but with with Samsung, Huawei, Xiaomi and U.S. based Microsoft, Amazon, and Google trying to cash in on the AirPods popularity this year, it's seen as a understandable defensive move.

Digitimes notes that the "AirPods 3's mechanical designs will make assembly a more complicated job. With abundant assembly experiences, the sources commented, Taiwan's Inventec will have a chance of winning more assembly orders from Apple for the new device than China's Luxshare Precision. At the moment, both assemblers equally share the orders for AirPods 2."

Where the rumor seemed to steer off-course a little is when it stated: "Industry sources said there are active noise-cancelling (ANC) headphones and passive ones." At present, "the world's most popular ANC headsets are Bose's QC35 2 and Sony's WH-1000XM2, boasting the best noise-cancellation performance and both being circumaural earphones."

While adding noise cancellation on Apple's AirPods 3 makes sense and hopefully for the holiday season, remember that in Q4 2018 the news was that Apple delayed their over-the-ear headphones until 2019. Whether the Digitimes rumor got their wires a little crossed is unknown, but either way, noise cancellation is a great feature to add to both AirPods 3 and Apple's upcoming over-the-ear headphones.