This week the US Patent & Trademark Office published a patent application from Apple that relates to new protective coatings being added to Apple devices in the future that will prevent damage to housing structures, transparent members associated with optical component windows and displays, and other device structures. Then again, perhaps Apple has already begun applying this new coating on one or more new iPhones.

More specifically, protective coatings may help prevent damage to device structures (e.g., damage due to scratches, damage due to fracturing from drop events and other impacts, and/or other damage).

Apple's patent FIG. 6 below is a cross-sectional side view of an illustrative member such as a housing wall or transparent member with coating layers. 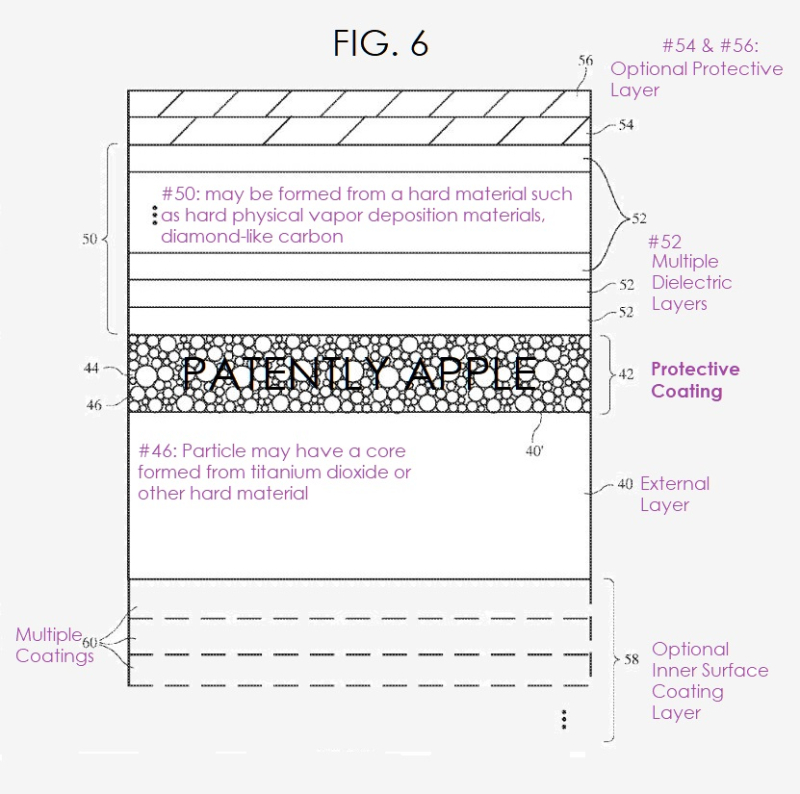 The protect coating specifically highlighted in FIG. 6 above is noted as #42 and may be formed on any suitable surface of member #40 (e.g., interior and exterior surfaces, etc.). As an example, coating #42 may include particles #46 (e.g., hard particles or other suitable particles) in polymer binder #44. The liquid polymer that is used in forming polymer binder may be acrylic, polyester, a liquid polymer precursor such as TEOS (tetraethyl orthosilicate), or other liquid polymer (polymer precursor). Apple's FIG. 6 also mentions the use of Diamond-Like Carbon (DLC) materials.

The protective coatings could apply to the iPhone, iPad Apple Watch, MacBooks, headphones, AirPods, a television, gaming device, automobile (for Project Titan), other wearables and more.

While I state that this is a future coating, I'm simply basing that on it being a patent application. It's not like I can call Apple and get a definitive reply as to whether it's being applied today.

With that said, C/Net did a drop test on the new iPhone XS back in September 2018, four months after the patent filing. This is what they stated in their report at the time:

"Based on how similar the iPhone XS looks to its predecessor, the iPhone X, I was expecting it to crack on the first drop or two. Clearly, I was wrong.

After four falls from up to 5 feet onto the concrete sidewalk, this iPhone XS came out almost intact. It has a few tiny dents and scrapes on the frame and the side of the camera, but the glass is nearly flawless.

Does that mean that the iPhone XS glass is stronger? That's a tough call to make, given the nature of our tests. But I can tell you it fared significantly better than last year's iPhone X, which ended up with cracks on both sides and tiny pieces of glass falling off the edges after only two drops from hip height."

Has Apple begun applying this new patent-pending coating application to iPhones? The massive difference that C/Net noticed didn't magically happen and it may just prove that their invention is now in play.

Apple's patent application 20190104625 titled "Electronic Devices Having Nanoparticle Protective Coatings," was published last Thursday by the U.S. Patent Office. It was originally filed back in Q2 2018. Considering that this is a patent application, the timing of such a product to market is unknown at this time.