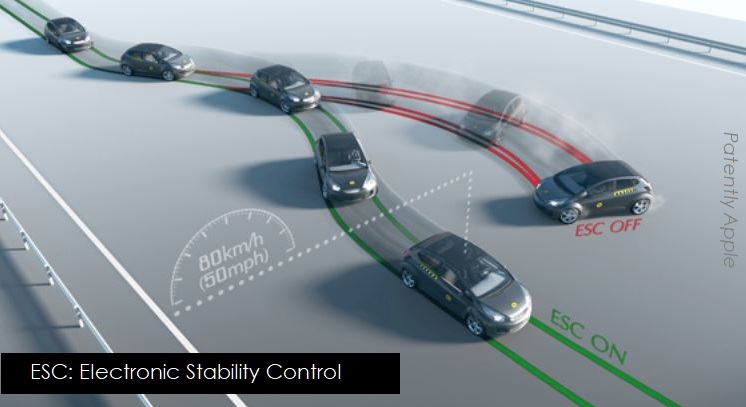 In the last 30 days four Project Titan patents have come to light covering a wide range of new systems that include an optical fiber illumination system, how headlight and tail lights will house cameras that's a part of a Vehicle Navigation System and a nighttime sensing system that's 3X the power of traditional headlights. Apple's fourth patent was granted to them today by the U.S. Patent Office. It covers Apple's version of an electronic stability control system that measures what is referred to as "slip and velocity." A system to keep a vehicle stable and on the road under varying road conditions.

Apple's granted patent 10,247,816 is titled "Apparatus and method to measure slip and velocity." The invention covers the controls of physics in a vehicle. In (automotive) vehicle dynamics, "slip" is the relative motion between a tire and the road surface it is moving on. This slip can be generated either by the tire's rotational speed being greater or less than the free-rolling speed (usually described as percent slip), or by the tire's plane of rotation being at an angle to its direction of motion (referred to as slip angle).

In order to understand today's granted patent a little better, Apple provides a grand overview of what the problem is that their invention is set to solve or improve upon.

According to Apple, road vehicles use tires that are compliant air-filled structures that exert force on the road by continually deforming and slipping relative to the road. For road vehicle stability and traction, modern vehicle control systems often use an estimate of how the vehicle moves with respect to the road.

Accurately estimating road-relative velocity vectors is of particular importance as velocity can be used for feedback control, position estimation, detection, and intelligent response to tire nonlinearities and sliding.

However, because of the compliance of the tires, directional stiffness, the radius of the tire, among other things, can vary as well as various factors such as temperature, pressure, wear, and load from the car and road, can make conventional approaches to velocity estimation challenging.

In response, safety systems have been developed that can determine the road-relative velocity using wheel encoders, inertial sensors, and Global Navigation Satellite Systems (GNSS), among others.

However, the current safety systems are often insufficient and can provide inaccurate road-relative velocity. Apple's invention is to improve on the method to provide superior measure slip and velocity.

An experienced driver can over the years lean how to drive under varying road conditions and is able to adjust to driving and stopping on roads that are icy, slippery or wet and know when to slow down when approaching intersections or turns in the road in order to keep the vehicle under control. Humans don't always get it right.

To a vehicle that is autonomous or semi-autonomous mode, nothing is left to chance. Everything is about math and highly intricate systems that can monitor every road condition, the vehicle's tire conditions, and the tire's traction capacity so as to determine in realtime how the vehicle will handle varying conditions.

Like our cover graphic presents, a car that is under control with the use of some kind of electronic stability control system won't spin off the road.

When you think about it for a second, it's actually quite mind boggling to see the depth of technology that has to go into designing a safe autonomous or semi-autonomous vehicle as noted in Apple's patent figures 1, 3A & 3B below. There you could even see that a radar scanning system is built under the vehicle to assist in assessing current road conditions in realtime. 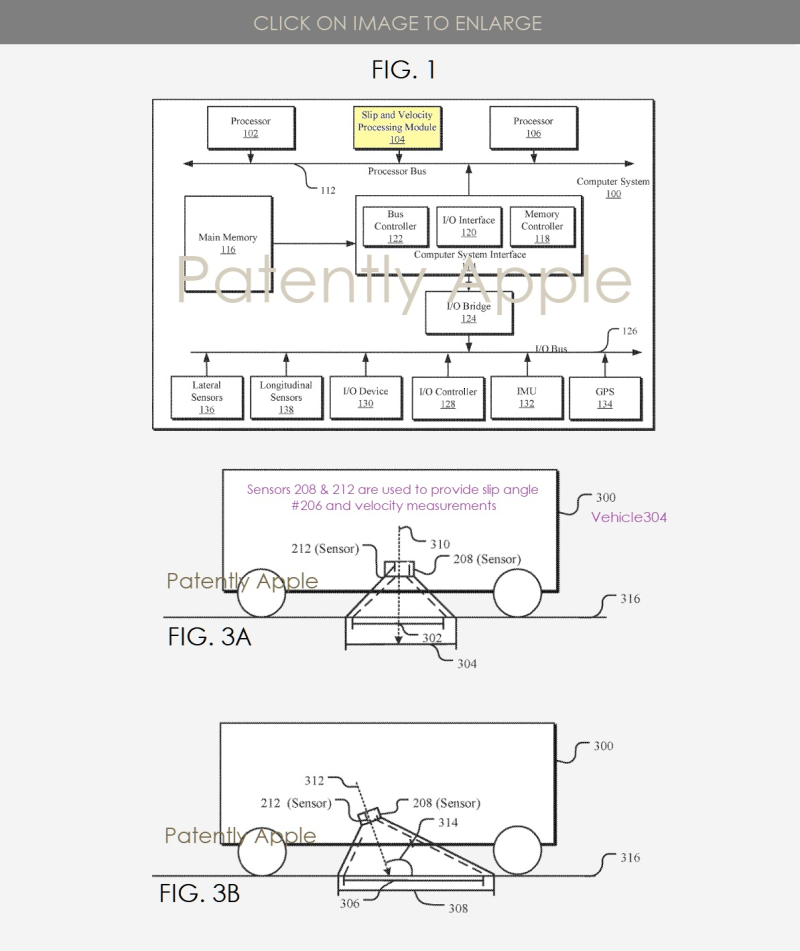 Apple further describes the triad of sensors which can provide further information for the velocity measurement, relative to a two sensor system. The triad of sensors can be used to eliminate the effect of vehicle heave rate, roll rate, and pitch rate.

The placement of the sensors on the under-side of the vehicle provide a reliable technique that can account for stability and traction issues that can arise as road vehicles encounter tire deformations and slippage, and might affect the accuracy of a conventional system.

The systems set out in Apple's invention also provides a solution that improves velocity estimation in a wide variety of conditions and beyond vehicular handling limits where tire slip and the like are more pronounced.

Knowledge of these handling limits can be of great benefit especially when encountering circumstances such as an icy surface, where the vehicle may slip and travel cannot necessarily be understood from tire rotation information and the like.

Apple's patent FIG. 2 below is a graph illustrating slip angle; FIG. 7 is a flowchart for a method to measure slip and velocity. 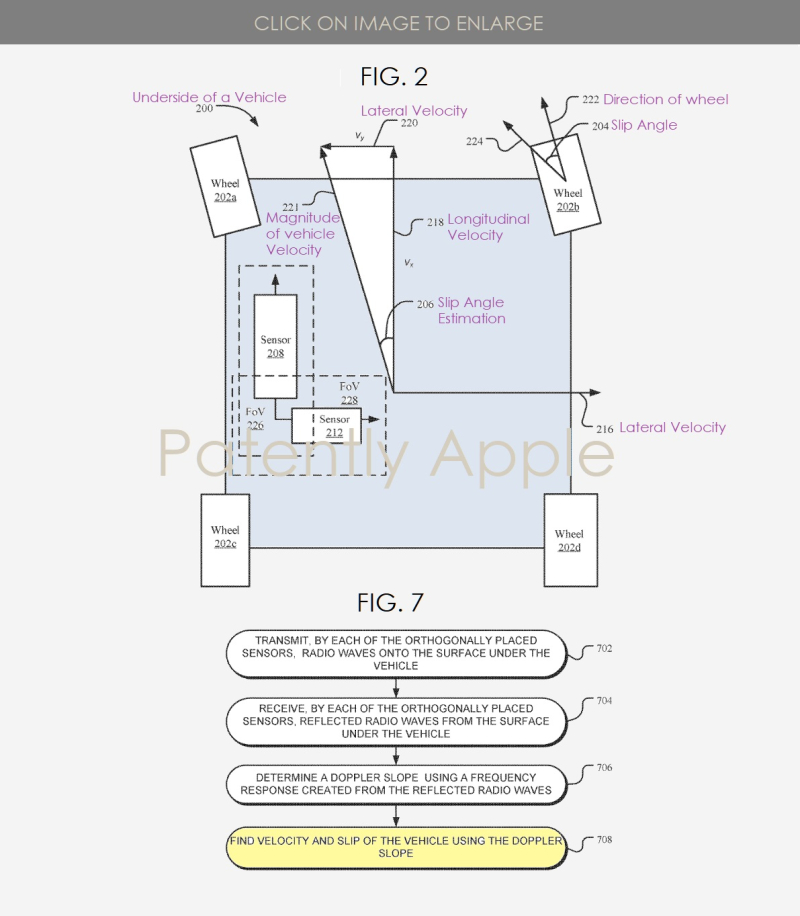 Similarly, sensors 208,212 can be radar sensors emitting radio waves toward the surface of the road and receiving the reflected radio frequency waves to determine the properties of the ground surface, such as ice on the road and potholes in the road, etc.

For those wanting to dive further into the details of this invention, click here.  Apple's granted patent 10,247,816 was originally filed in Q3 2016 and published today by the US Patent and Trademark Office.