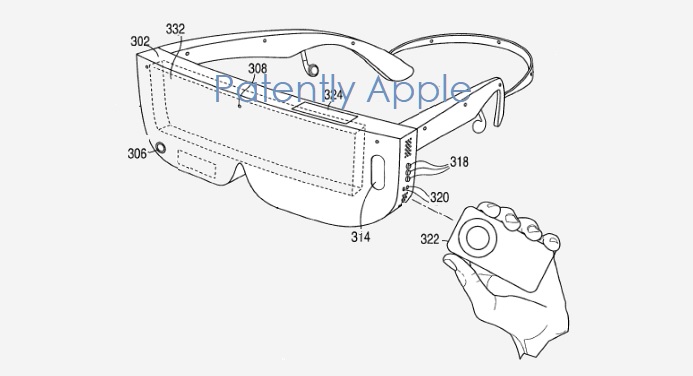 Today the US Patent & Trademark Office published another continuation patent from Apple that relates to new features added to their long standing head mounted display (HMD) system. Patently Apple covered one of Apple's first patents with these particular patent figures back in 2010.  We went on to cover one of their continuation patents back in 2015. In all, Apple has been granted six patents for this invention via a series of continuation patents since 2015.  This isn't 6 new inventions but rather one invention that has been updated over time in an evolutionary manner to advance the same invention as new technologies are integrated into the original design.

So what is Apple adding to their invention this time? According to Apple's new patent claims, Apple is adding an accelerator to the frame of the HMD that can accurately detect movements of the frame that works in sync with a new sensor.

More specifically, Apple notes in claim #4 that "The head-mounted apparatus defined in claim 1, further comprising: a speaker supported by the support structure, wherein the accelerometer is configured to detect a head movement and the processor is configured to control a volume of the speaker based on the detected head movement.

Apple notes in claim #5 that "The head-mounted apparatus defined in claim 1, further comprising: a strap coupled to the support structure; and a speaker integrated into the strap.

In patent claims #9, 10, 11 and 12 they point to a wireless remote control to control volume, to adjust video content and so forth. Although the wireless control has been illustrated in patent figures from day one as our cover graphic bares out, Apple didn't have it protected in the invention's patent claims.

Always keep in mind that patent figures that are presented in utility patent filings, like this one is, only provide conceptual HMD figures and definitely don't reflect the actual HMD design Apple is working on. The presented patent figures are to simply support features that the inventor wants to generally illustrate, but not specifically. This isn't a design patent which has to reflect the actual look of a particular device.

Apple's continuation patent 20190116252 that was published today by the U.S. Patent Office was originally filed back in Q4 2018. Considering that this is a continuation patent, the timing of such a product to market is unknown at this time.

Like the iPad, Apple appears to be working on several kinds of devices in this one category that covers AR smartglasses, a mixed reality HMD and maybe even an entry HMD system that relies on a premium iPhone as the brains and display of the system.

Apple's patents are clearly showing us this distinct trend. This is also Apple's methodology that is used for iPads for instance with the standard  iPad, the iPad Pro, the iPad Air and the iPad mini in order to capture customers at every economic tier worldwide.