When reviewing the various styluses in the market, it's not uncommon to read that a stylus is too thin or too fat. Designing a single stylus diameter like Apple Pencil is simply mimicking the diameter of a natural pencil or pen. But Apple engineer Paul Wang, who is a product designer and senior input technologist believes that Apple Pencil could be redesigned in a way that could inflate the circumference of Apple Pencils so as to accommodate a wider range user's need for a better grip experience. Wang also has additional ideas of interest covered in today's report.

Yesterday the US Patent & Trademark Office published a patent application from Apple that specifically relates to an "adjustable handheld stylus."

Apple notes that while some shapes and sizes are advantageous for certain purposes, the same shape and size of Apple Pencil could be less desirable for other purposes.

By further example, the size and/or shape of an end portion of the stylus can be altered to provide features for contacting the stylus to a surface, such as an electronic display, in a particular way.

That's exactly what Apple did with the latest version of Apple Pencil for iPad Pro released in October 2018 as noted below. Technically, this part of the patent is a patent fulfilled.

In one aspect, Wang envisions that the grip area of a future Apple Pencil being could be circumferentially expanded so that those with larger hands will be able to get a better grip of the Pencil for writing and/or sketching. 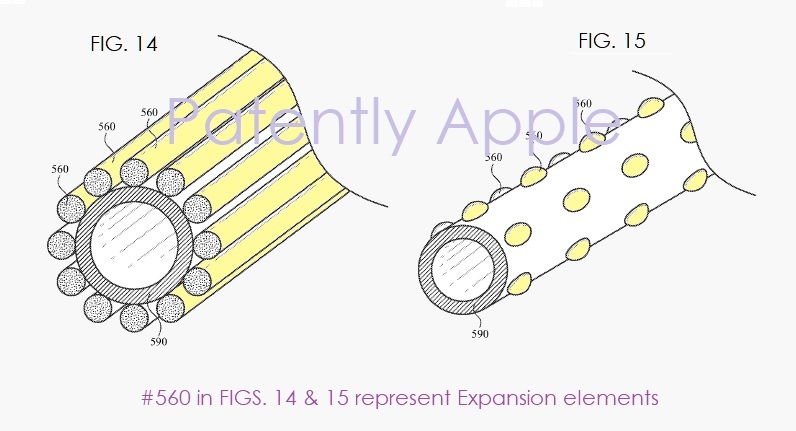 As shown in FIGS. 14-15 above, each of the expansion elements (#560) can be distributed circumferentially within an annular space. As shown in FIG. 14, the expansion elements 560 can also extend longitudinally along a length of the stylus (e.g., along a grip region). This allows a substantially similar cross-sectional shape to be formed at various longitudinal locations along the stylus.

According to some embodiments, a fluid can be directed into and out of the expansion elements or the expansion elements could be adjusted with magnets. For example, the fluid can be a ferrofluid or magnetorheological fluid that is responsive to magnetic fields. The adjustment element can be or include a permanent magnet and/or an electromagnet to apply the magnetic field.

Another avenue that Wang touches on is offering users optional Apple Pencil Tips as noted in Apple's patent FIGS. 18 and 19. 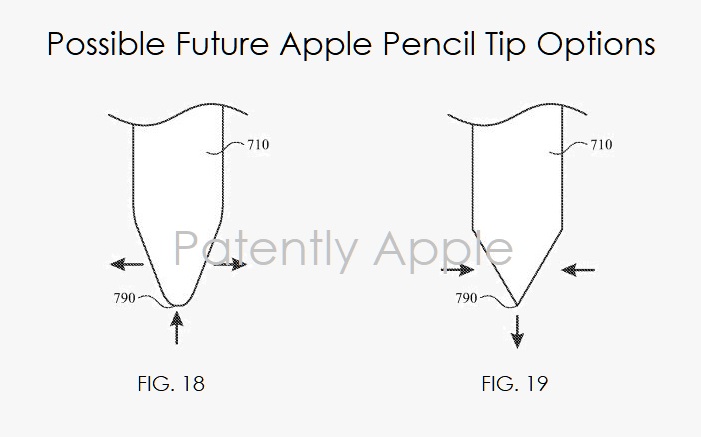 The size and/or shape of the tip probe can be adjusted between various states (e.g., as shown in FIGS. 18 and 19) by altering radial and/or axial components of the tip probe.

The size and/or shape of the tip probe of Apple Pencil can be altered to mimic characteristics of a portion of a particular writing or drawing tool (e.g., tip or blade of a pen, pencil, chalk, marker, or paintbrush).

Other points of interest include haptic feedback added to Apple Pencil when the user alters the circumference. Most interesting is the mention of "other components" that could be added to a future Apple Pencil such as a biometric reader, a display and a camera.

The camera is of interest because back in early February our Patently Mobile IP Blog posted a report titled "A Surprise Granted Patent for Samsung Reveals a Galaxy Note S-Pen Doubling as a Camera with a Superior Optical System." So both Apple and Samsung are on the same page about a possible camera being added to a future stylus.

Apple's patent application published on Thursday was originally filed back in Q3 2017. Considering that this is a patent application, the timing of some of the new features discussed coming to market is unknown at this time.