Rumors of who will supply smartphone vendors with foldable displays has been around since late 2016 when a Korean report wildly speculated that LG was working with Apple, Google & Microsoft to deliver foldable display for foldable devices. ETNews was another news site starting that rumor. Considering that during the MWC 2019 trade show in Barcelona LG passed on showcasing a foldable smartphone, it's safe to say that their development of folding OLED displays is behind schedule.

There are only a handful of OLED foldable display makers in the market. One is  China's BOE, who is rumored to be the supplier behind Huawei's new Mate X foldable smartphone that was revealed last Sunday. It was in 2017 that BOE was in talks with Apple in 2017 about flexible displays, so I wouldn't count them out at this point.

Another supplier is Visionox who supplied Nubia with a flexible display for their new Nubia Alpha smartphone watch. The Xiaomi foldable tri-fold prototype device that generated a lot of buzz online used Visionox foldable displays.

Supply chain reports are sometimes influenced by companies wanting to get their brand out in the news to make them out to be leaders. Samsung is famous for that. In August 2018 a supply chain report claimed that Samsung was to supply Xiaomi and Oppo with foldable displays in 2019. While we don't know what supplier that Oppo will actually use yet,  we do know that Xiaomi's prototype was using Visionox foldable displays and not Samsung's.

ETNews who predicted in December 2016 that LG was working with Apple, Google and Microsoft for foldable phones is now reversing course and reporting that Samsung is close to winning over Apple's foldable device display business.

ETNews reported late last month that "Samsung Display made a set of foldable displays and delivered them to Apple. This set, which is actually powered like a smartphone, has a 7.2-inch size foldable panel. 7.2 inches is 0.1 inches smaller than the Samsung Folder 'Galaxy Fold."  Samsung Display also delivered the drive set to Google.

As the report goes on it sounds like Samsung provided samples to every top major smartphone maker including Huawei and Oppo so mentioning Apple is only to gain popularity of the rumor.

In the end, this weak report had to admit that it's "unclear whether Apple and Google will finally adopt Samsung's foldable display."

The ETN report ends noting that according to the industry, Samsung Display's capacity of producing foldable displays is currently 200,000 units per month and 2.4 million units per year. The company is considering considering expanding its production capacity to the level of 10 million units in the future. Volumes that are meaningless.

Both Samsung and Huawei foldable phones are first generation designs and the price of them is reflected in low production. The foldable phones haven't been tested in the real world and in fact Huawei wouldn't even allow anyone including the press to touch the devices. Not exactly a sign of confidence.

This week Patently Apple was first to discover and report on an Apple patent about designing the fold of a foldable smartphone with a unique heating technique to ensure the fold wouldn't crack when folded or opened in the cold. 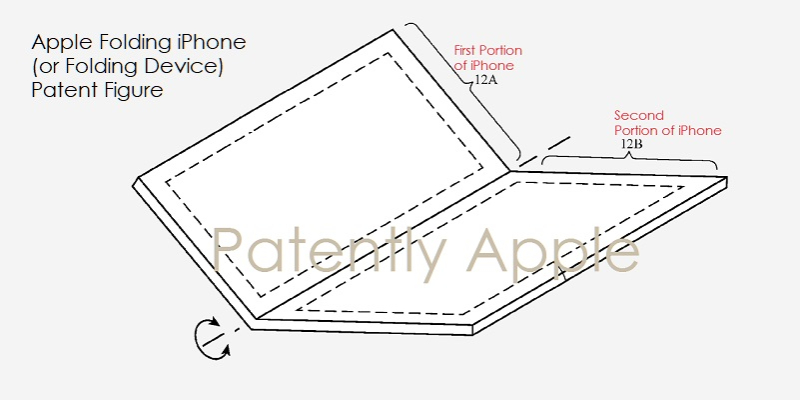 Patents also show that Apple is working on special coatings to strengthen foldable smartphones that may have multiple ways of opening and closing. Another patent shows that Apple is considering  the use of a micro-LED display and even Liquid Metal shape memory alloys. That doesn't sound like anything Samsung is peddling in the industry at the moment. I doubt that Apple will use an off-the-shelf solution from Samsung.

At the end of the day, the rumor of Samsung sending out samples of foldable smartphones to major smartphone vendors is a blast of nothing. Until foldable smartphones are being produced in volume and at reasonable prices, rumors like these are worthless and really just more propaganda for Samsung.

Samsung is Apple's OLED supplier for the entire iPhone X family today so it's not impossible that when the time is right and Apple has worked out the technology they want built into these displays that Samsung could get the nod.

But for now, it's a blind guess by ETNews who first thought in 2016 that it would be LG getting the nod from Apple and Google. On slow news days, ETNews and other creative rumor sites set rumors in motion for clicks. Take it with a gain a salt.

Apple is currently having some difficulty selling new iPhones over $1,000 and so rushing to bring a $2000 folding smartphone to market is unlikely to be found on Apple's short term roadmap. Here's a classic case where being first to market is absolutely meaningless as is this rumor.