In Q4 2018 Apple slipped into Third Spot behind Huawei for Smartphone Shipments in Europe, the Middle East and Africa (EMEA) 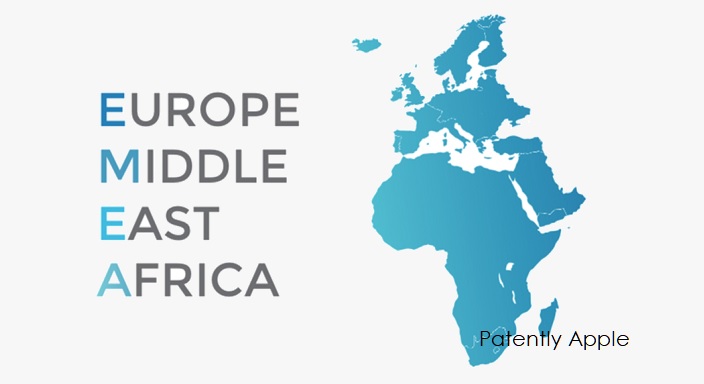 Earlier today Patently Apple posted a report titled "Samsung Admitted during their annual Shareholder's Meeting that they're in Crisis Mode with Global Smartphone Stagnation." In reality, it's not as much stagnation as it is Huawei taking business away from both Samsung and to a larger extent Apple in the EMEA sector.

Of course for Samsung the crisis stems from all of the top Chinese OEMs gunning for them in Asian markets where Samsung once ruled. That's not the case with Apple. For instance, Samsung once ruled the Indian market. Today Xiaomi has over taken them in India and it only took about two years. Apple remains at 1% or less in India, so it's not as visible a crisis.

According to IDC's chart for Q4 2018, Huawei excelled in Europe, the Middle East and Aftrica. The EMEA market covers roughly 115 countries that you could check here for specifics. 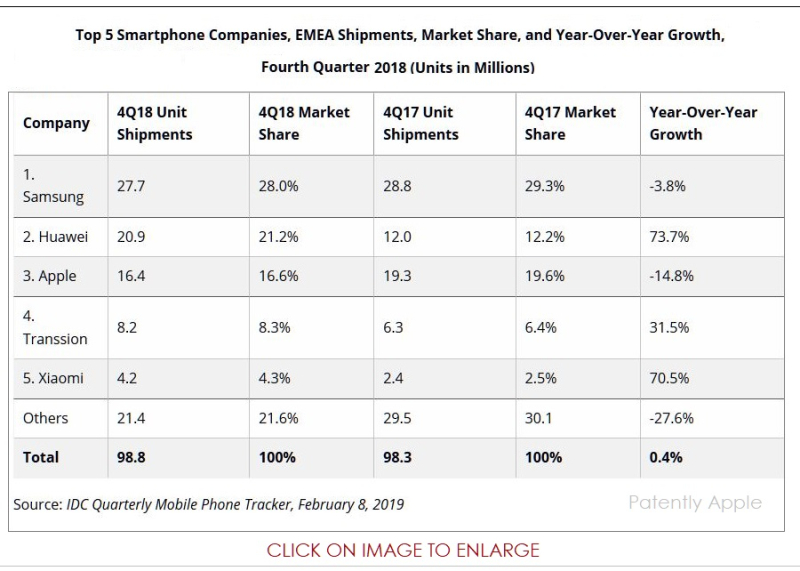 Total smartphone volumes in EMEA in the fourth quarter were 98.8 million, very similar to those in the same quarter in 2017. Total value was up 2.5%, at $35.5 billion, though this total masked increases across Europe and a drop in the Middle East and Africa.

In this context, Apple had a reasonable quarter, though not as strong as the fourth quarter in 2017. Its value share of the EMEA market was down to 41% from 46% a year ago."

Pinto added that "The one outstanding performance from Huawei over Samsung is the presence of its other brand Honor, which is doing increasingly well. Honor is run quite independently from the Huawei brand, and the two brands to a certain extent compete with each other. More Honor phones are sold in retail chains than by the operator shops in comparison with the Huawei brand, and Honor in general has lower price points. The two together allow Huawei to play more points on the market." You could visit the Honor website here

Simon Baker, program director at IDC EMEA: "Xiaomi also had an exceptional quarter, with shipments up 70.5% year over year, but lower than in the third quarter. Xiaomi is entering new markets across Europe one by one, but it is finding this a difficult process. However, its market share continues to grow steadily," said. "Huawei, on the other hand, is already there in all of them, especially in operator retail, a big advantage, and it is leveraging that presence in a head-to-head battle with Samsung driven by a lot of marketing and the strength of its product portfolio. Such a rapid change is rare in this region among the top players in the market."