IDC Forecasts Double-Digit Growth in Wearables in 2019, a Market that Apple Comfortably Leads

In late February Patently Apple posted a report about Apple Watch maintaining it's market lead for Q4 2018 with stats from Strategic Analytics. In early March IDC chimed in with Wearable stats for Q4 2018 with Apple leading the way with both Apple Watch and AirPods. Today IDC published an overview of wearables for all of 2019 and five years out to 2023.

As noted in IDC's chart for 2019 and 2023 we see that "Earwear" like Apple's AirPods is going to experience a strong year with 27.4% market share and smartwatches accounting for 45.6% market share. Apple participates and leads in smartwatches and earwear which will account for 70.3% of the wearables market. The only segment that Apple doesn't participate in yet or Sport Bands or "Wristbands" according to IDC. 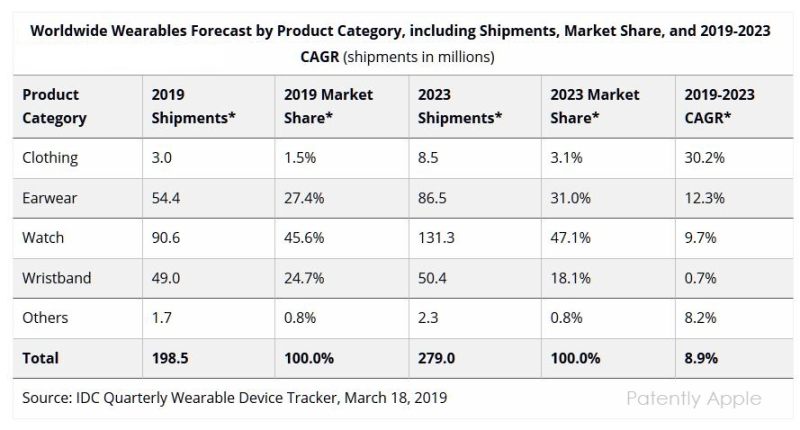 Overall, IDC's report notes that the worldwide market for wearable devices, now inclusive of wireless headphones with smart assistants, is forecast to grow 15.3% over the previous year to 198.5 million units by the end of 2019.

Driving that growth will be the continued proliferation of watches, ear-worn devices, and wrist bands as well as further adoption in the healthcare segment. Looking ahead, the market is expected to reach 279 million units by the end of 2023 with a compound annual growth rate (CAGR) of 8.9%.

Jitesh Ubrani, research manager for IDC's Mobile Device Trackers: "The rise of smart assistants on wearables, both wrist-worn and ear-worn, is a trend worth watching. Though still in its infancy, the integration of these assistants with wearables opens up new use cases, from allowing these devices to tie into the smart home to making the devices more proactive at urging users to live healthier or more productive lives."

It was a little odd that IDC didn't give Apple any credit for being the leader in the healthcare segment. On Friday and well ahead of the IDC report Apple sent out a press release about the Standford Medicine heart study and Patently Apple added the news of Johnson and Johnson announcing a new Heartline Study working with Apple that will begin later this year. Without a doubt it's Apple leading the way in smartwatches used as a health monitoring device.

Within the enterprise, Llamas noted that "wearables can help to accelerate companies' digital transformation by transmitting information back and forth while allowing workers to complete their tasks faster. This is where both vendors and companies can streamline processes to achieve faster results."

Expect Earwear statistics to be tainted through most of the year with Huawei wanting to get on the board by giving away earbuds with certain models of smartphones. Statistics are never broken down by free or paid for, nor by profits which should be the gold standard. Analytical firms reward cheaters like Huawei with giveaways. In fact real statistic should ding players like Huawei for such tactics instead of rewarding them.