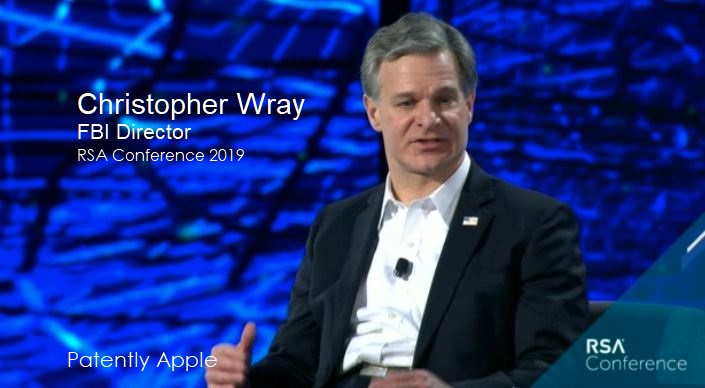 Today in an interview with Brookings Institution Senior Fellow and Security Analyst Susan Hennessey, FBI Director Christopher Wray stated that the FBI is working closely with social media platforms in various ways. "We provide them with information and they're able to take action using their own tools, policing their own platform. And then in turn there are situations where they provide us with lead information for us. So there's more of the virtual cycle going on and quite a number of really encouraging success stories. I think it's a great example of how government and the private sector can work together in a common defense."

That was the positive message coming from the FBI Director out of the RSA conference that started yesterday and going through to Friday.

On the flip side of playing nice with social media and tech companies in general, Wray made it crystal clear that encryption should have limits.

C/Net's Angela Lang covering the conference noted that Wray added that "The technology that scrambles up information so only intended recipients can read it is useful but it shouldn't provide a playground for criminals where law enforcement can't reach them. It can't be a sustainable end state for there to be an entirely unfettered space that's utterly beyond law enforcement for criminals to hide."

In a report by Gizmodo today they noted that "The encryption war is quiet now, but the murky back-and-forth between Silicon Valley and Washington, D.C., is far from over.

FBI Director Christopher Wray said on Tuesday that the encryption issue is "getting worse and worse" for law enforcement around the United States at all levels.

Wray added that "I’m hearing increasingly that there are solutions" for strong encryption that opens the targeted data to law enforcement."

With the RSA Conference running till Friday we may hear more on the encryption battle front from various parties. The FBI, on the other hand, may decide to keep the talks with Silicon Valley private for now.