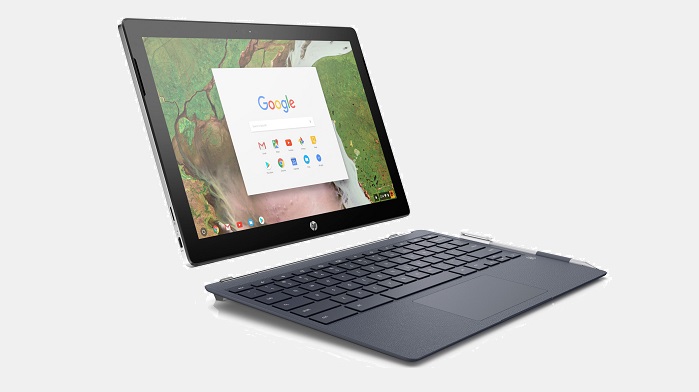 Research from Kantar Worldpanel ComTech has found that the increasingly blurred lines between laptops, tablets and Chromebooks are creating a more competitive landscape for manufacturers. Although Kantar's byline of "Competition Heats up for Laptop & Tablet Manufacturers" sounded interesting, the report itself never actually addressed the topic at hand. It drifted aimlessly into being more of a quasi Chromebook ad. Our report adds a little spice to the Kantar report while challenging some of their key points where Apple seems like the loser when in fact data would suggests otherwise.

Dominic Sunnebo, global director at Kantar Worldpanel ComTech comments: "For a lot of consumers, Chromebooks still sit somewhere between a laptop and a tablet.  They are the device that shoppers looking to buy a tablet consider most, but when it comes to laptops their category share is much smaller than others – last year only 10% of recent purchasers opted for a Chromebook, in comparison to 77% opting for Windows and 13% for a MacBook.

Our research reveals that a lack of knowledge about the product is underlined by the fact that in-store recommendation and expert reviews have a greater influence on Chromebook buyers compared with Windows laptop or MacBook shoppers."

The data further suggested that potential Chromebook customers require positive reassurance in order to make a purchase. In stark contrast to MacBook buyers, 46% of were influenced by a previous good experience with the brand and for whom word of mouth recommendations (18%) play a greater role than professional critique (12%).

Sunnebo added that Apple has brand longevity to benefit from whereas Chromebook partners like HP, Samsung, Acer and others draw more heavily on the Google Brand and the Chrome name to help drive similar success.

The report later notes that "While Chromebooks still feel like an unknown to many shoppers, among actual buyers overall satisfaction scores sit above Windows laptops.  Their ease of use makes them exceptionally popular among consumers with children and silver surfers.

Kantar notes in their report that where Chromebook is weaker is with the all-important millennials market. Younger shoppers are digital natives and want devices with with recognizable software and top features. Therefore Chromebook manufacturers need to position themselves as having something else to offer this demographic if they want to grow their appeal in this segment of the market.

The Kantar report never mentions how Chromebooks will be able to put pressure on traditional laptop and tablet brands. In fact the report drifts aimlessly in that regard.

What Kantar's report didn't mention is that the lines will blur for some in the not-too-distant future as Windows 10 is reportedly coming to Chromebooks. This one new feature alone could double Chromebook's market share rather quickly. Though it won't "heat up" the market as Microsoft will be selling Windows to both PC and Chromebook makers. It's the same Windows pie split differently. It's equally meaningless against Apple.

As for Kantar stating that Google Chromebook manufacturers need something else to lure millennials, I think Kantar missed the boat being that Google is now in the process of addressing this issue head on.

While gaming notebooks are once again a hot segment of the laptop market today, Windows based gaming notebook's are crazy expensive because they provide powerful high-end GPUs and cooling systems.

A future Chromebook user will be able to simply tap into Stadia and play top tier gaming titles like Doom Eternal (coming this year) or Assassins Creed Odyssey without the need for crazy high priced GPUs. Windows gaming notebooks are 10X what an Xbox costs for the convenience of playing games anywhere on the go.

A Chromebook with Stadia could potentially kill traditional consoles and high priced notebooks and desktops. This is the pressure Chromebooks might be able to deliver and never mentioned by Kantar.

Sunnebo later added that "Laptop buyers tend to make a purchase to replace an existing device rather than to add something new to their hardware collection.  While laptop manufacturers can benefit from these legacy users in a way tablet makers cannot, they also need to work hard to convince shoppers to switch to their model."

I found that to be an odd assessment considering that Apple's CEO recently pointed out that iPads had outsold notebooks as the chart below proves out even though the category is shrinking over time. 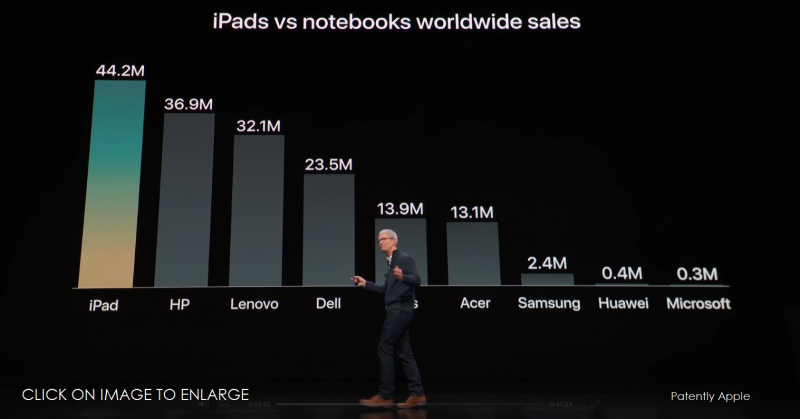 Our second graphic further below also contradicts Kantar's assessment that consumers with children prefer Chromebooks. A recent PCMag survey showed that households with kids at home choose Apple's MacBook over competing notebooks hands-down as the chart below indicates. 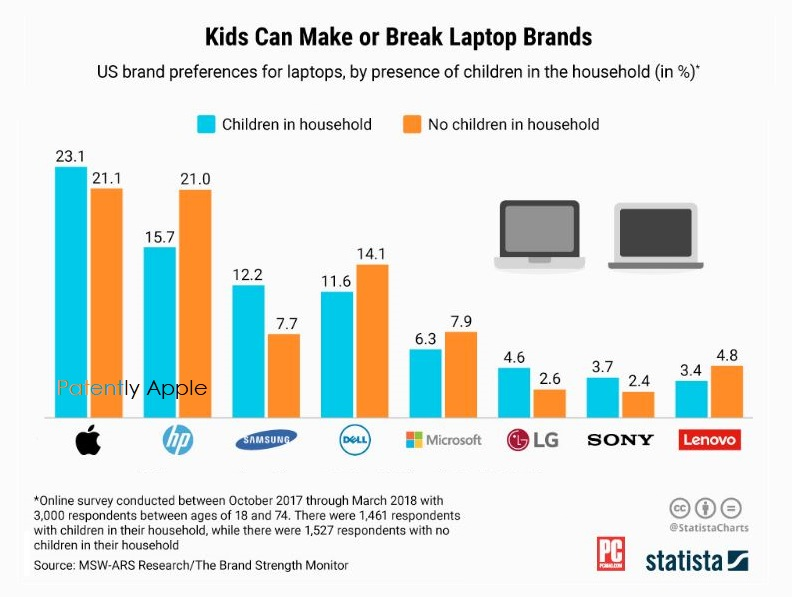 In the end, the Kantar report was supposed to be about how competition is heating up for laptop and tablet manufactures and yet it failed to deliver a single tangible example that we could sink our teeth into.

What will Apple or Microsoft do to heat things up in 2019? Kantar never explains that in any way. The report vaguely keeps its focus on Google's Chromebook and yet even on that point it fizzles out.

The examples of where Chromebooks could deliver some competiton this year were provided by Patently Apple and absent from the Kantar report.

As for Apple, on Monday they released updates to their iPad line-up ensuring that Apple Pencil is now available across their entire tablet line-up. They updated the quality of their Retina display and added the Bionic A12 processor even to the lower end iPad mini that certainly raised the bar for Apple's competitors. Where was Kantar on this development?

Apple still has the best tablets on the market and is always heating things up and making it harder for their competitors to make a dent in this market based on value against them.

And lastly, Microsoft is beginning to make a profit with their 2-in-1 Surface devices but are hurting their own Windows partners in doing so. Heating up competition with their own partners is counter productive.

For now, the notebook and tablet markets seem to be drifting with upgrades and not heating up in any meaningful way. If there is a disruptive force in notebooks this year it may very well end up being Google's Chrome browser running Stadia. The Chrome browser runs on PC's and Macs and so Google could be a big winner in 2019 if Stadia actually pans out.