Home Archives Contact Us Subscribe Twitter Facebook Patently Mobile
While Intel Aims to enter Mass-Production of 5G Modem Chips in Q2 2019 for iPhones, Sources think that 2020 is more Realistic
Apple Resoundingly Leads the Wireless 'Hearables' Market that is Forecast to Sharply Rise by 2020

This has certainly been a very business month for Apple HMD patent applications being published by the U.S. Patent Office. On March 7th Patently Apple was first to report on Apple's HMD with a "Motorized Adjustable Headband System" in addition to a second patent filing covering a "Thermal Regulation System." On March 9th Patently Apple discovered yet another HMD patent filing in Europe by Apple covering a system designed to assist the user avoid "Eye Dazzle."

Yesterday the U.S. Patent Office published yet another HMD patent application by Apple that relates to incorporating multiple face seals on the HMD so as to ensure that exterior light can't interfere with the content that the user is viewing and to provide users with maximum comfort.

Apple notes that most HMD's on the market today use foam material for its seal Yet Apple states that for some face shapes and sizes, the traditional foam structure may be unable to conform to the user's face and thereby unable to , sufficiently block exterior light.

Another negative related to most HMD's on the market today is that in  implementations in which engagement of the face seal with the user's face is relied upon to support the head-mounted display, some users may experience uncomfortable areas of high pressure.

Apple's face seal design includes movable structures that conform to the face shape of the user in order to enhance comfort and/or light-blocking, which improves the user experience.

An overview of Apple's HMD face-seal areas are highlighted in yellow by Patently Apple to illustrate where the face seal is from various perspectives. 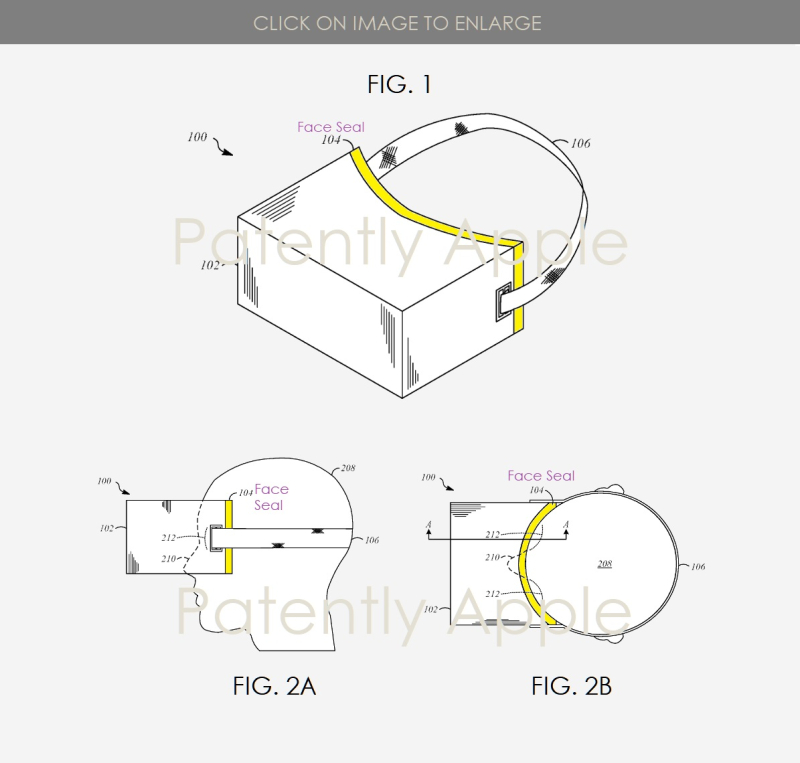 Apple's patent FIG. 4 below is a front inside view of the head-mounted display showing the face seal #104 and its multiple seal support members #436. 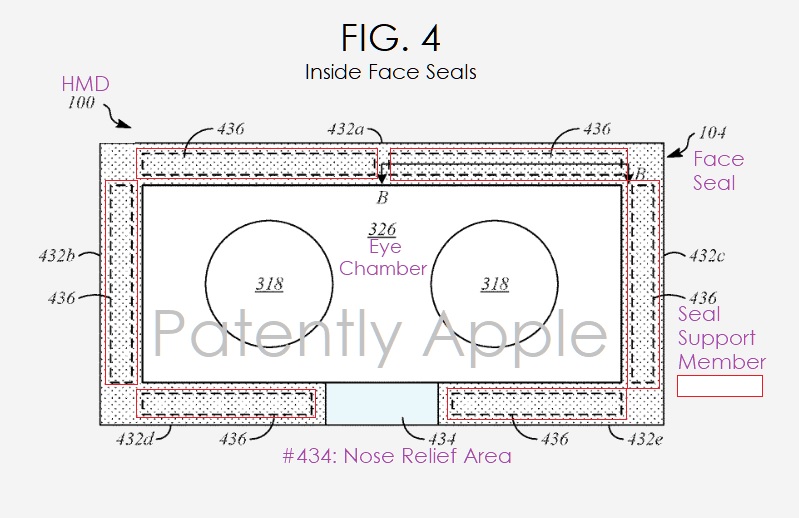 In the illustrated example, the seal support members are independent elements that are incorporated in the face seal.

Apple further notes that the face seal is formed from a resilient compressible material that compresses in response to engagement with the face of the user (#208), and expands when engagement ceases.

Later Apple mentions that sensors can be incorporated into the face seal and maintain a consistent distance to the user's skin.  Sensors could measure skin temperature. Another example could be a sensor to monitor heart rate.

Apple's patent dives deep by providing three examples of how the superior face seal could be constructed with the use of springs, ball joints and hinges engineered to ensure that the fit is snug, comfortable and most importantly, to ensure that no exterior light interferes with the content that the user is focused on. The details are too many to list in this report.

Apple's patent application that was published today by the U.S. Patent Office was originally filed back in Q3 2018. Considering that this is a patent application, the timing of today's highlighted HMD feature to market is unknown at this time.