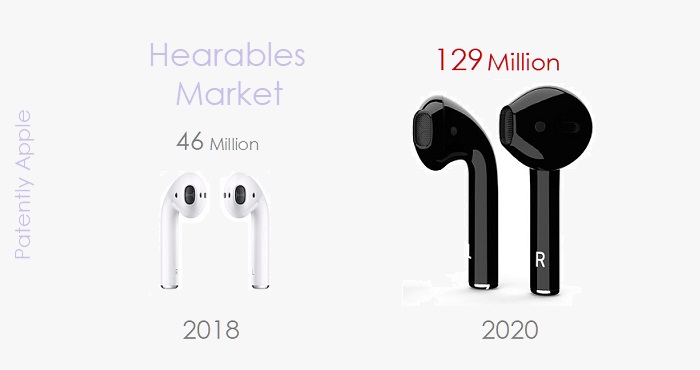 A new analytical report published today clearly states that Apple held close to 75% of the 2018 wireless earbuds market which they refer to as the "hearables" market. In 2018, 46 million hearable devices were sold with Apple selling 35 million of them.  Counterpoint is forecasting that the market will sharply rise to 129 million units by 2020.

A flood of competitors are piling into this market segment with the likes of Huawei and Samsung offering free hearbles which is bound to skew true units sold vs. shipped for 2019 as these companies look to catch up to Apple's AirPods.

Commenting on the hearables traction in 2019, Peter Richardson, Research Director stated: "2019 will be the year that hearables evolve into an important market. During the year, major technology companies are expected to drive innovations in true wireless hearable devices. A rise in discretionary incomes of consumers and evolving digital habits are expected to propel the demand for hearables across the world as well."

Commenting on the technology trends, Liz Lee added: "As the trend among modern hearables is going towards physical miniaturization while maximizing functionality and user experience, it opens up many exciting capabilities to be integrated into future hearable devices. These include in-ear intelligent assistants to control devices and tasks around you, to act as smart hearing aids, real-time language translation, tracking your vitals and more."

Pavel Naiya, Senior Analyst at Counterpoint Research said in-part: "Use of AI in voice tech is emerging as a new user interface with the many new applications. Around three out of four people now consider it as an important feature for future hearables purchase. It is a new user interface which needs a totally new ground-up development approach by the ecosystem players to make it more user-centric and feature rich.

We believe it will evolve as an open ecosystem similar to the touch interface, following the natural process of evolution. The platform with maximum touch points along with better user experience is likely to win."

Below you'll find a Counterpoint chart titled "Most Preferred Hearable Brand Currently." I found it confusing. If Apple actually "sold" 35 million out of 46 million total sold in 2018, then how does it translate to Apple only holding a 19% position as a preferred brand "currently"? They should re-title the chart to "who consumers chose might be the leader in hearables by 2020," because currently consumers have chosen Apple by 75%. 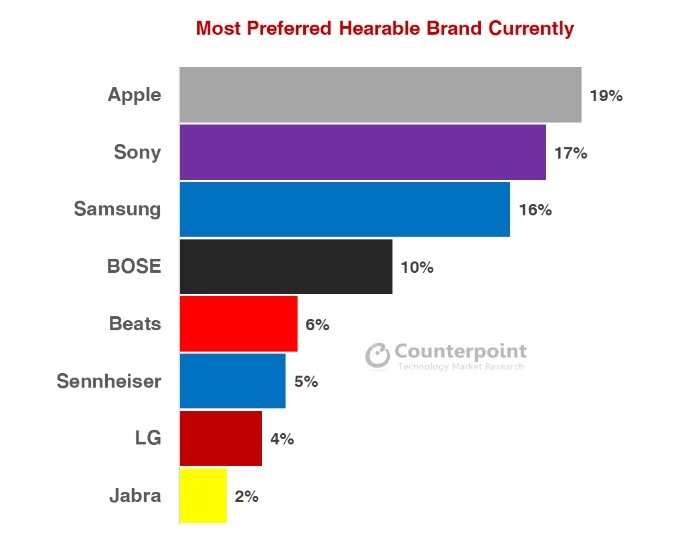 You could read the full Counterpoint report on Hearables here. If you're a Counterpoint client you can go here to obtain or pay for their full research report.