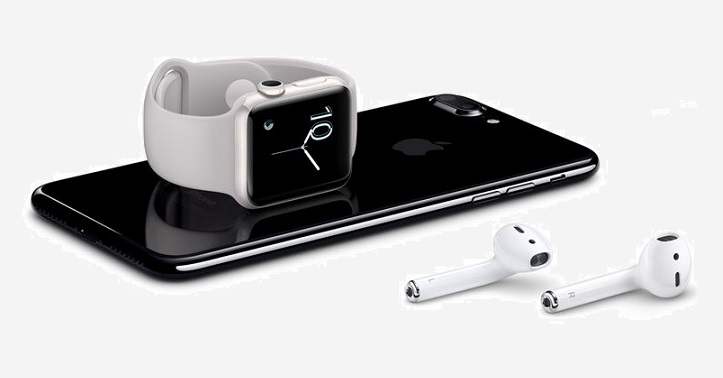 Last week Patently Apple posted a report titled "Apple Watch Maintained its Market Share Lead in Q4 2018 though Fitness Trackers Skew the Data." The report was based on data from Strategy Analytics that was reportedly focused on smartwatches – and yet mixed in cheap fitness trackers which skewed the data. Today IDC published a Q4 2018 report on "wearables" which evened the score a little for Apple.

In the wearables category Apple is credited for AirPods, Beats headphones and Apple Watch. This provides Apple with a bit of a cushion and shows Apple's overall dominance in wearables versus Apple Watches versus Fitness bands. The IDC methodology is better than Strategy Analytics even though it still has a glaring flaw which I'll point out later

IDC reports that out of 16.2 million wearable devices shipped, Apple sold 10.4 million Apple Watches during the holiday quarter. The remainder of Apple's shipments were comprised of AirPods and Beats headphones. 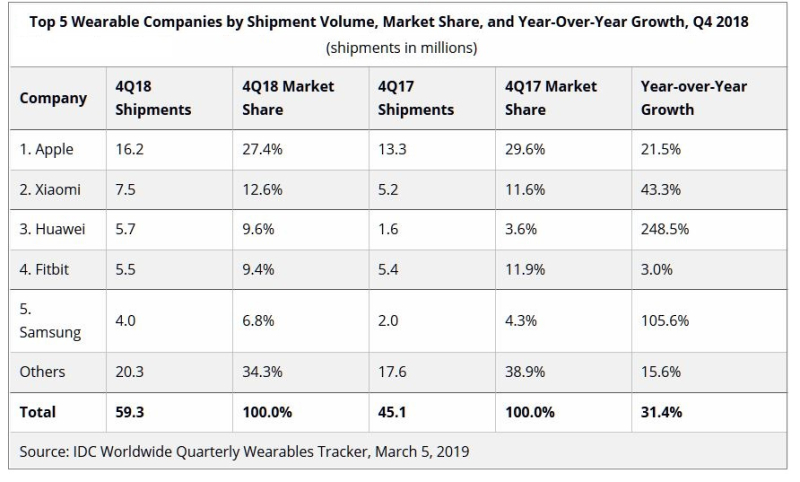 Apple's 2019 wearable stats could end up being a blow out considering Apple will have next generation AirPods and Apple's own branded headphones with some nice advancements.

All of 2018 Wearable Statistics

Beyond Q4 2018 being a strong quarter for Apple in wearables, the statistics were even better for the entire year. Apple grew a whopping 39.5% by shipping 46.2 million wearable devices versus shipping 33.1 million devices in 2017 as the IDC chart bears out. 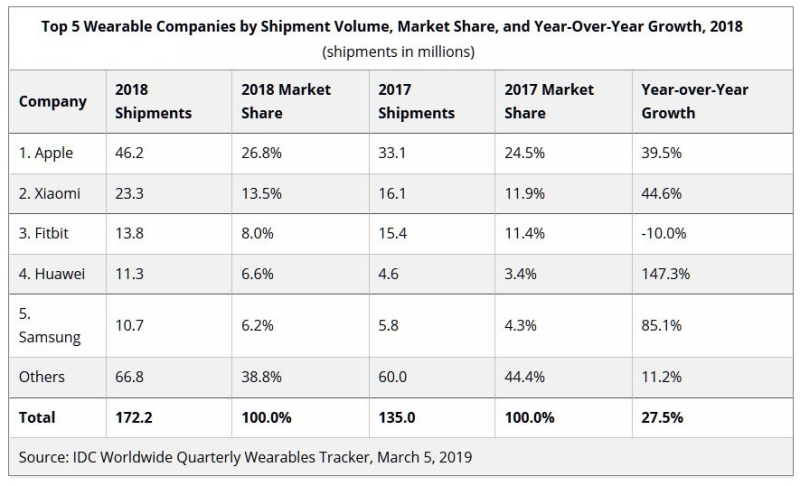 Strategy Analytical statistics has the fault of having Apple's premium Apple Watch mixed in with cheap fitness trackers. The IDC report has its own glaring issue as well.

When you look at the Year-over-Year Growth for Huawei wearables in Q4 2018 (the first chart), the fine print tells us that Huawei's staggering Year-over-Year growth of 248.5% was due in part to Huawei and Honor smartphones being bundled with wearables. In other words, the volume growth that Huawei is credited for in IDC's chart is fake. It's not based on units sold and shipped but rather only shipped. How can IDC seriously position Huawei in third spot based on the company giving away wearables?

For more on these statistics check out the full IDC report here. As a reminder, Apple didn't provide Apple Watch stats for calendar Q4 and won't be going forward. Therefore the data from any analytical company will be considered guesstimates at best.