While Apple Pay could be Huge for Apple in the Long Term, for now it's only Scratching the Surface

Last Sunday Patently Apple posted a report titled "The Riyad Bank in Saudi Arabia begins offering Apple Pay on Tuesday with other Saudi Banks likely to Follow." How can anyone not be impressed with Apple Pay's progress in the market since launching in October 2014. In just four and half years the list of banks now supporting Apple Pay is mind bending. If you haven't seen the list yet, check it out here.

If you didn't know better, you'd say Apple is definitely one of the top leaders in the financial world. Yet the stats are an eye opener. Apple is actually in the last tier of leading methods of payments in the US in 2018.

Google Pay which launched in 2015 is tied with Apple Pay with a measly 2% market share while Amazon Pay beat both of them combined with 5%. PayPal has a whopping 22% as presented in the chart below from Statista that was published this week. 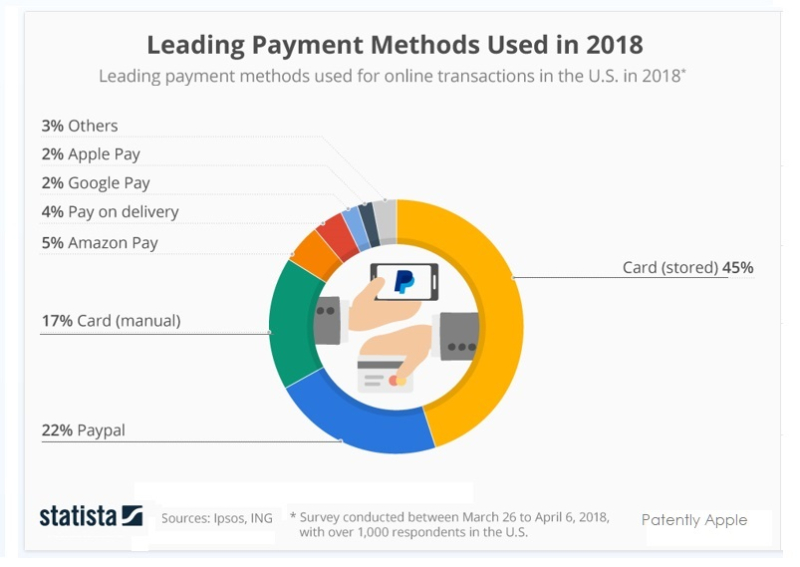 What's ahead of PayPal in the U.S.? "Cards (stored)" at 45%. This week Patently Apple posted a report titled "Last Year's Rumor of an Apple Credit Card arriving in 2019 is on Target with Apple Employees testing it First."

With Apple working on introducing their own credit card, you can see that Apple is acknowledging that in the short term the thinking is simple: if you can't beat them, join them.

Apple wants a bigger piece of the services business as smartphone sales decline (at least in the short run). Once new customers are using the Apple Pay credit card, because they prefer plastic, Apple could educate them into using other Apple financial services over time like business loans.

Simply duking it out with Google Pay over time isn't working and so Apple's next tactic is quick and simple.

Apple's future in finance could be huge.  In the big picture, earlier this week in a CNBC interview with PayPal's CEO, Dan Schulman predicted that the digital payments industry will mature into a $100 trillion market.

For a little perspective, Alibaba's Alipay is the number two online financial service in China having sailed past PayPal back in 2013. Last year Alipay had 870 million registered users.