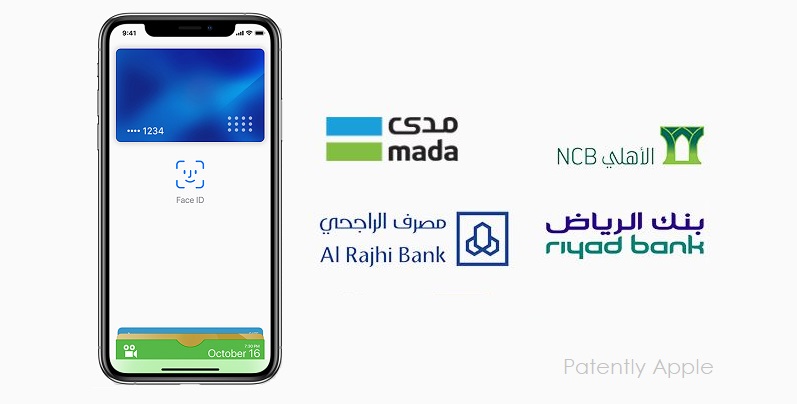 Back in October 2018 several banks in Saudi Arabia (one and two) announced that they would soon be supporting Apple Pay.  Three of the ones noted on the Saudi Apple Pay website are in the top five banks in Saudi Arabia, according to Gulf Business and shown below. Apple's site only says "coming soon." A Tweet now confirms February 19, 2019 as the date that Apple Pay begins to roll out by the Riyad Bank.

On February 8th Patently Apple posted a report titled "Apple Accused of Supporting a Saudi Government App that Monitors the whereabouts of Saudi Women." In that report we noted that Apple's CEO Tim Cook had given Saudi Arabia's Crown Prince Mohammed bin Salman a tour of Apple's new Headquarters last year while they worked on various joint ventures. With the murder of journalist Jamal Khashoggi and a veiled connection to the Crown Prince has complicated matters of business.

We further noted that "Apple is likely to review the matter [regarding Saudi's  'Absher' App] in-depth before jeopardizing their business projects with the Saudis in yanking the app in question too quickly."

Obviously one the major projects worked on was getting Apple Pay up and running in Saudi Arabia.

This is why Apple will investigate the app and not jump to conclusions like U.S. Senator Wyden (Democrat) did in demanding Apple remove from it's online story immediately on the news of a single source that might have exaggerated the apps abilities of specifically monitoring women traveling around the country.

At the end of the day, if the Tweet linked to at the top of our report pans out, Apple Pay will be available from at least one Saudi Bank on Tuesday. Some of the feedback on the Tweet notes that the announced date was from an internal source for employees only. So for now, the news is considered a rumor and one we hope comes true.