Home Archives Contact Us Subscribe Twitter Facebook Patently Mobile
Adobe revealed at a Recent Event that they may become an ARM Licensee in order to reimagine their Franchise Products
Three iPhone X Patents were Published Today Covering the Notch, it's 'Vision System' and Wireless Charging 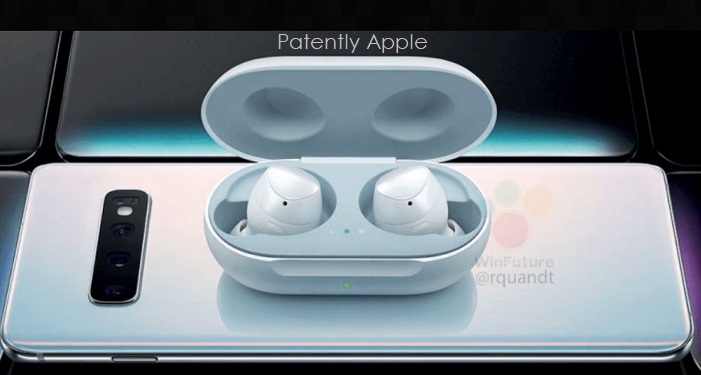 In October Patently Apple posted a report covering Huawei's new Mate 20 Pro that was packed with new features such as under display fingerprint ID and wireless reverse charging. With Samsung set to launch their new Galaxy S10 in San Francisco on February 20th we know that they'll be providing their new premium smartphones with much larger batteries and with that introduce wireless reverse charging.

Germany's WinFuture reported on a series of new images of the new Galaxy S10 smartphones coming this month and note that "there is a first picture showing the new Samsung Galaxy Buds wireless headphones in their carry case, which can be charged wirelessly from the Galaxy S10 (Plus). The headphones should cost 149 euros." That picture is presented as our cover graphic.

Apple has been working on wireless reverse charging for a future MacBook. The image below is from our patent report illustrating how a MacBook will be able to charge several Apple products at the same time. Being able to use this process to recharge AirPods is likely to be included once Apple releases this feature.

If Apple introduces iPhones with wireless reverse charging in September, then being able to recharge their AirPod's case could become a reality.

Yet for now it appears that Samsung will get a slight jump on Apple with this feature.