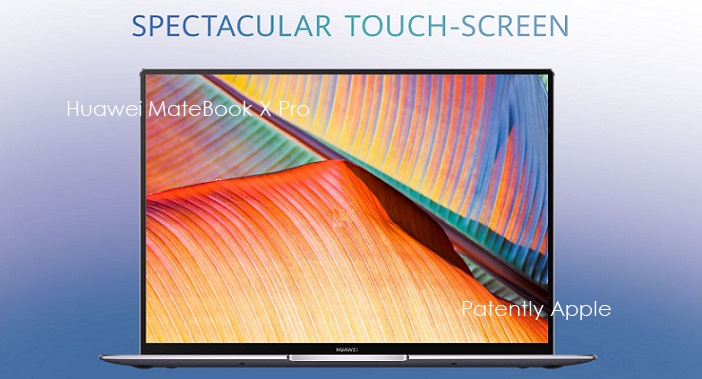 It was reported last Monday that U.S. companies were growing more concerned about efforts by Chinese firms to obtain their intellectual property. All eyes are now on Huawei Technologies, which the U.S. government recently accused of stealing trade secrets and it appears that Apple just happens to be one of Hauwei's major targets.

Earlier today Patently Apple posted a report about Huawei's new folding smartphone and noted how Huawei's CEO Richard Yu went out of his way to compare their new Mate X to Apple's iPhone XS Max even though they're not in the same smartphone category. The Mate X is foldable smartphone. It was almost an obsession.

Monday's report by The Information noted that "The U.S. Justice Department said Huawei had a formal program that rewarded employees for stealing information, with bonuses that increased based on the confidential value of the information. Huawei employees were encouraged to post stolen information on an internal company website, and they were also given an email address where they could send the information, which was then reviewed by what was known internally as the 'competition management group.' Huawei assured employees they wouldn’t be punished for taking such action, the indictment said.

Later in the report The Information noted that "In another incident, Huawei is suspected of copying a connector Apple developed in 2016 that made the MacBook Pro hinge thinner while still attaching the computer’s display to its logic board, according to a person familiar with the matter.

A similar component, made of 13 similar parts assembled in the same manner, showed up last year in Huawei’s MateBook Pro, which was released as a competitor to Apple’s MacBooks, the person said. Apple submitted a patent for the component in 2016, and it remains pending.

Huawei approached multiple Apple suppliers with expertise making the component and provided them with the same schematic. Those suppliers recognized the component as Apple’s design and refused to make it for Huawei, the person said. But Huawei eventually found a willing manufacturer." For more on this read the full report here.

I don't know if Apple is waiting for the U.S. Patent Office to grant them their hinge patent before suing Huawei or if there's enough proof to bring Huawei to court on the matter of the hinge in Huawei's MateBook X Pro. Only time will tell. 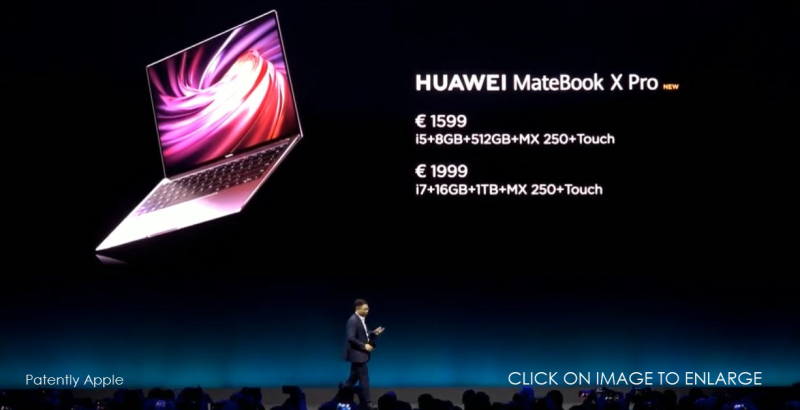 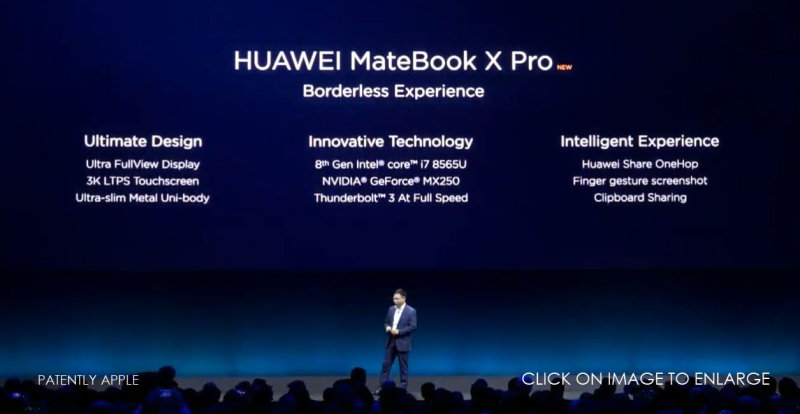 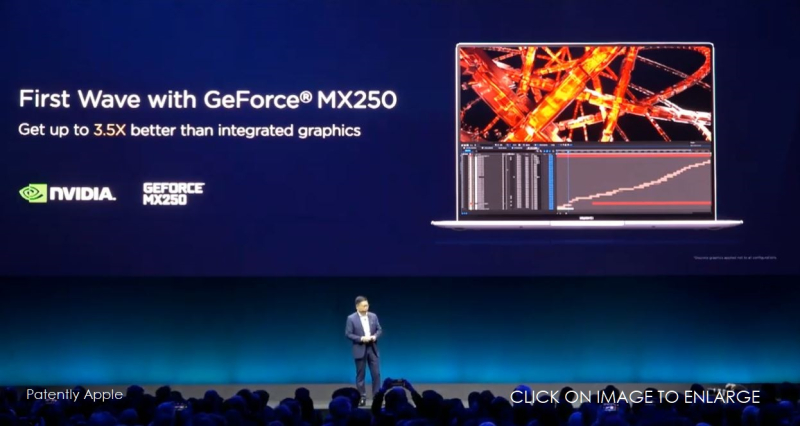 One new feature is called OneHop which allows a Huawei phone user to simply tap the OneHop decal on the MateBook X Pro's palm rest and have videos, photos or documents instantly transferred. The demos were super speedy. 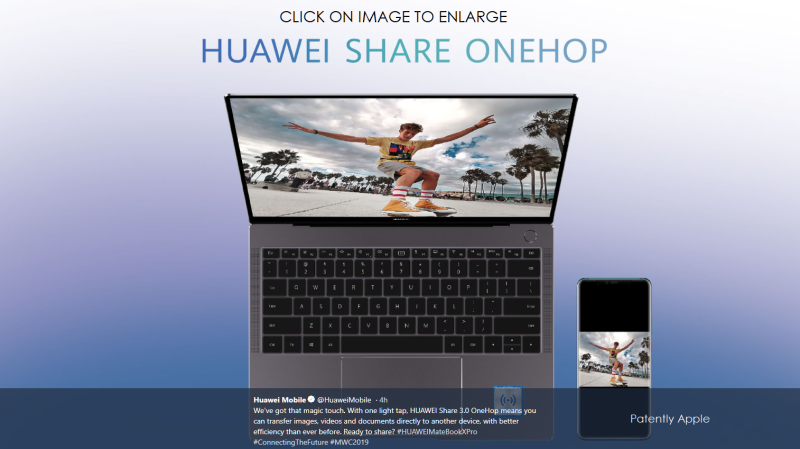 The MateBook X Pro part of the Keynote starts at the 55 minute mark below. The OneHop feature is introduced at the 1:06:54 mark of the video.

From the keynote demo, it appeared that Huawei's new OneHop feature for transfering files from a phone to a notebook is much easier than Apple's AirDrop that uses multiple steps to achieve the same thing as demonstrated in AirDrop videos here or here.

Intel's VP Client Computing group came on stage today and made it clear that they were thrilled to be partnering with Huawei.

This week Axios reportedly was told by Intel that that Apple would switching to ARM processors in the future.

Whether Apple is working with Intel on this project is unknown at this time. Intel has an ARM license and could provide x86 emulation for ARM. Intel warned Qualcomm last year not to introduce x86 on their Snapdragon chips without a license from them and the same may be true for Apple.

That aside, Huawei has the branding in China that may be able to boost MateBook notebooks enough to bypass Apple's current volume. That would help Intel with any losses from Apple.