On Saturday, Apple and its four key contract manufacturers (Foxconn, Pegatron, Wistron, Compal) along with Qualcomm filed a joint pretrial brief on disputed contract provisions. The 76-page document serves as a preview of various issues.

In a new report today posted by FOSS Patents, Florian Mueller states that hidden costs of a product that consumers aren't aware of only surface through litigation. Case in point: In Saturday's legal filing we learn that Qualcomm charges a 5% wireless patent royalty on iPhone repairs!

Specifically Mueller notes in his report "that "Qualcomm wants a 5% patent royalty (with a $400 cap for the royalty base) on smartphones. 3.25% of that relates to standard-essential patents, though I haven't seen Qualcomm successfully enforce even one of those SEPs in all those years. The related dollar amount will be illusory the moment its wireless SEPs must be licensed at the chipset level. Another 1.75% relates to non-standard-essential patents, and after almost two years of non-SEP infringement litigaton against Apple, Qualcomm has no real leverage. News cycles aren't leverage.

So there's a problem with what they charge, but until I read this pretrial brief, I was unaware of there being another problem with the wide net they cast when actually collecting their royalties.

Apple and its contract manufacturers complain that when Qualcomm performs audits, it insists on getting its 5% on whatever Apple pays to a company like Foxconn: not only the device, but also any services, including repairs. I'll use Foxconn as the example here because I've been able to find articles on its iPhone repair capacity. Quite often, devices are repaired right at an Apple Store (such as an iPhone 7 Plus I took there a few months ago to get a new screen and battery). In that case, Qualcomm probably can't charge patent royalties because it doesn't have a direct agreement with Apple. But some devices are sent to China to be repaired there at a lower cost. And in that case, Qualcomm collects 5% of whatever a company like Foxconn charges Apple."

Below is an excerpt for the document filed on Saturday relating to Qualcomm's excessive greed. 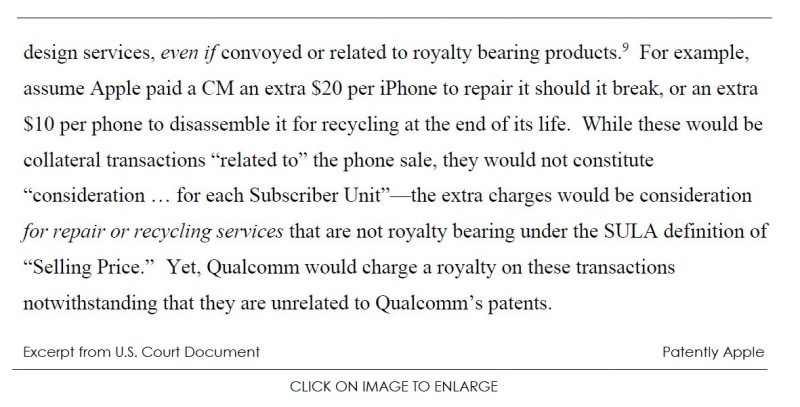