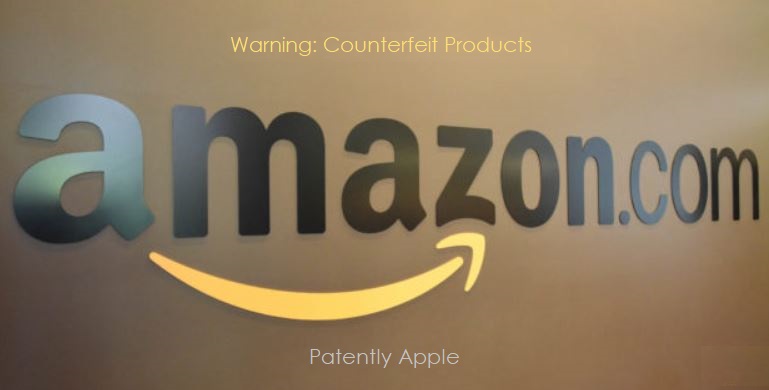 Back in late 2016 a Patently Legal report was posted titled "Apple Sues Mobile Star for Selling Counterfeit Power Adapters and Charging Cables through Amazon." The report noted that "Apple purchased the power products from Amazon.com and determined that they were counterfeit. Apple was informed by Amazon.com, and upon that basis is informed and believes, that Mobile Star was the source of those particular counterfeit power products purchased by Apple."

Today it's being reported by CNBC that Amazon has added a first-ever warning about counterfeit products to it's earning report.

CNBC specifically notes that "Amazon is warning investors of one of the biggest problems facing its online marketplace: counterfeit products.

Under the 'risk factors' section of its annual report, Amazon added a new line addressing counterfeit problems on its marketplace.

Amazon financial statement specially adds that "We also may be unable to prevent sellers in our stores or through other stores from selling unlawful, counterfeit, pirated, or stolen goods, selling goods in an unlawful or unethical manner, violating the proprietary rights of others, or otherwise violating our policies."

The disclosure reflects Amazon's increased concern over the counterfeit problem on its marketplace, as the words "counterfeit" and "pirated" were never mentioned in its annual filing before. For more on this, read the full CNBC report here.