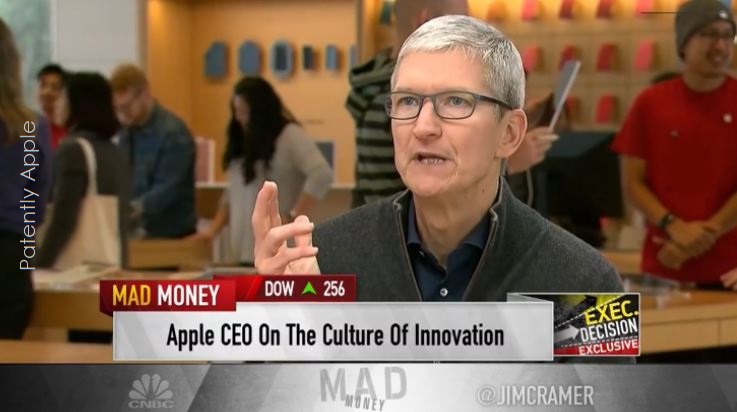 This afternoon Patently Apple posted a report titled "Apple's CEO in an Interview with CNBC's Jim Cramer Attempts to Play the Long-Game Card to Counter Wall Street's Negativity." After CNBC's Mad Money show hosted by Jim Cramer Aired tonight, the full interview with Cook was made available as presented below. Cook talks about the iPhone XR, the Indian Market, Qualcomm, Siri, the market's reaction to his preannouncement and halting device sales reporting and more.

Below are just a few of the highlights from the Cook interview that we want to keep a written record of as references for future reports. The chosen highlights were taken from CNBC's transcript.

CRAMER: Okay, so most tech companies, I think, don't innovate nearly as much as you. But let me just posit what we got. You take so many risks that I don't think you get credit for. For instance we had what turned to be ridiculous strings around our neck, and then we got the AirPods.

We loved our dumb watch that told time, and now we have a smart watch that saves our lives. We loved the big, fat jack, and then we got the lightning jack. We loved our Sony, $2,000, mirrorless camera, until we got the iPhone X, which takes better pictures. Why do you, therefore, have a 12 multiple? Because to me, that is wrong.

And so these are life-changing things. We've got machine learning embedded in our silicon in our phone. You know, this allows us not only the power efficiency to have an incredible performance in a very small package, but it allows us to manipulate this data on the phone, have the transactions on the phone, as opposed to letting them out in the world.

The whole privacy issue for — we've always been on the right side of privacy. But the market is now moving. And so this is an incredible strength that we've built. The photos that you're able to take with your phone, as you said, I mean, these are life-changing things, if you like to chronicle your life. This morning, I picked up my phone and I saw a memory from a year ago —

CRAMER: I love the memory thing.

Okay, now, we gotta talk about some of these people who, the naysayers. And we've dealt with them before, when the stock was substantially lower. A Wedbush analyst said, "Apple's clearly the darkest days, representing a challenge in growth." Journal, "It's too soon to call the XR a flop, only after a few months. But early indications are, of course, it's a flop." What do you say to people who say XR flopped? What do you say to, say, "darkest days"?

COOK: I say bologna. I call bologna on that. Let me tell you how I view this. Here's the truth, what the facts are. Since we began shipping the iPhone XR, it has been the most popular iPhone every day, every single day, from when we started shipping, until now.

CRAMER: But how about relatively? I mean, there's been other ones that have ...

COOK: I mean, do I want to sell more? Of course I do. Of course I'd like to sell more. And we're working on that. But in terms of the product itself, it's an incredibly innovative product. It has a bunch of advanced technologies in it from the chip with the neural engine to security embedded to an edge-to-edge liquid retina display, the first in the industry, longest battery life ever in an iPhone.

I mean, it is unbelievable. And the photos that you can take of your life and of your loved ones, I mean, it beats many, many of the standalone cameras that you could buy now that nobody uses anymore. And so these things give a lot of value to the customer. So that's that.

CRAMER: Well, then you were surprised with the market reaction to both when you decided to not reveal units and when you revealed the shortfall.

COOK: I'm never surprised by the market, to be honest with you. Because I think the market is quite emotional in the short term. And we sorta look through all of that. We think about the long term. And so when I look at the long-term health of the company, it has never been better.

The product pipeline has never been better. The ecosystem has never been stronger. The services are on a tear. If you look at, let's just take wearables as an example, right? Wearables, it's mainly the Apple Watch and AirPods.

If you look at this, and on a trailing basis. I'm not projecting. On a trailing basis, they've we've already exceeded the revenue for wearables is already more than 50 percent more than iPod was at its peak. Now, this is a product that I think everybody would say it was an incredibly important product for Apple, full of innovation, and probably, the trigger for the company getting on a very different trajectory and into other markets.

And so already, exceeded it by 50 percent at its peak. At its peak. Also, if you take AirPods and the Watch separately, and you sort of back these up and align it to the launch date of iPod, as well, and, you know, where all of them have a comparable amount of time, you would find that each one, independently, is, like, four to six times ahead of where iPod was at a comparable period of time.

And so AirPods are becoming ubiquitous out there. People love them. I get notes every day. They're chock full of tech. But they just work. It's the elegance of them, but with significant technology and built right in and an unbelievable user interface.

CRAMER: I've been following stocks for 40 years, Tim. And you guys are a fountain of innovation. My wife said, "Tell him, what do they want? Time travel?" What do you have to do?

Cook on iPhone's in India

CRAMER: Now, I've got some ideas for you, okay? I talked to some people at Walmart yesterday. An arrangement with Walmart, Flipkart to take over India with a budget phone, rather than doing it piecemeal.

COOK: Yeah. For us, we're about making the best product that enriches people's lives. And so we're not about making the cheapest, right? We want to make a great value. But that's not necessarily the cheapest. And so for us, what we've seen is there's enough people in every country in the world that we play in that we can have a really good business by selling the best phones.

Now, the best phones, we knew that, as we went to the X and then the follow-on of the XS and the XS Max, that everybody would not want to spend $1,000 for the phone. So we made the iPhone XR. And we put as many of the advanced technologies as we could in that phone—

COOK: And we priced it right between the 8 and the 8 Plus of the year before. But in India, in general, we are all in. It is a major focus. If you look at how we've done, over the years, we've gone from a $100, $200 million business to, last year, we exceeded $2 billion.

That $2 billion was flat, year over year, after rapid, rapid growth. And so we have more work to do. We'd like to put stores there. We would like some of the duties and so forth that are put on the products to go away. And we're working closely with the team there. And I believe that we'll have better results at some point in the future. I'm not in the forecasting mode here today. But it's an important market for us.

CRAMER: You have people who are naysayers. One of the naysayers is not an analyst. It's Qualcomm. Qualcomm keeps telling you, over and over again, "You're gonna come to the table. You have to. Lost the suit in Germany. Lost the suit in China. Wait 'til you see them cave." Are you gonna cave?

COOK: No. Look, the truth is, we haven't been in any settlement discussions with them since the third calendar quarter of last year. That is the truth. So I'm not sure where that thinking is coming from. The issues that we have with Qualcomm is that they have a policy of no license, no chips. This is, in our view, illegal. And so many regulators in many different countries agree with this. And then secondly, the obligation to offer their patent portfolio on a fair, reasonable, and nondiscriminatory basis. And they don't do that. They charge exorbitant prices. And they have a lot of different tactics they use to do that. And that's not just us saying that. I mean, you can see what's coming out of the FTC trial here in the United States. And obviously, I have an issue with some of their other tactics that I'm sure you've read about.

CRAMER: Right, that they say you are in settlement talks all the time.

COOK: Well, not just that, but paying somebody to write fake news and then promoting it. This is stuff that should be beneath companies. This is not how things should operate.