Home Archives Contact Us Subscribe Twitter MeWe Facebook Patently Mobile
While Apple may Gain a Third Camera for Premium iPhones in 2019, we'll have to wait until 2020 for a Next-Gen 3D Camera
Some iPhone X Series Customers are Complaining that the 'Flashlight' Annoyingly Continues to Turn on Automatically

On January 8th Patently Apple posted a report covering Samsung's preannouncement that their operating profits nose-dived by nearly 40% during the holiday quarter due to weakness in their memory chip business. The operating profits fell far short of the market expectations of 13.6 trillion won, stoking fears among investors already rattled as a result of the global tech slowdown.

Today Samsung officially reported their financials for Q4 2018 and operating profit did in fact drop 29%.

Samsung also noted that "Under our commitment to achieving sustainable growth over the mid- and long-term, Samsung will focus on enhancing its existing leadership and developing new growth areas,” the company said, adding it will offer new product innovations this year including foldable smartphones and MicroLED TVs.

Enhancing its existing leadership just happens to coincide with Samsung Electronics CEO and President "retiring." He'll stay on for four months to ensure the transition to new management goes smoothly. Baxter is being replaced by a Korean executive. 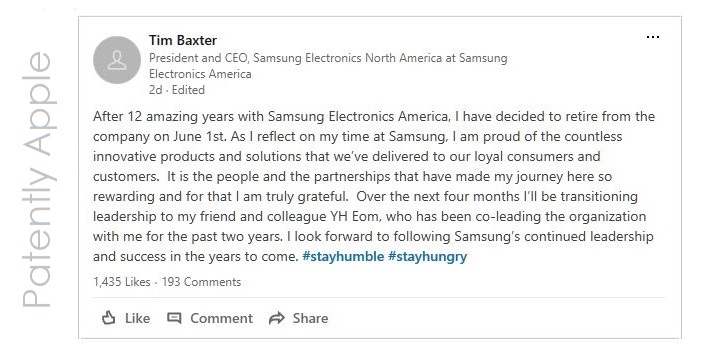 For more on the particulars in Samsung's official financial report, read the full Investor's report here.

In a second report on Samsung's financials, they noted that "During an earnings conference call held after the announcement, Samsung officials made careful and not-so-positive forecasts about the first two quarters of this year, concluding that the current slow demand for memory -- especially the company‘s biggest-selling DRAM chips -- would remain throughout the first half of year and start to improve later in the second quarter.

One company executive added that "The Company will focus efforts on raising higher sales than last year with the Galaxy S10 series this year. We are considering having a wide range of prices for the flagship models with a more detailed lineup composition in order to increase consumer choice."