Home Archives Contact Us Subscribe Twitter MeWe Facebook Patently Mobile
Apple Applies for new 'EarPods' Trademark with Extended Coverage
Apple's inability to Secure enough Screws for the Mac Pro made in Austin is used as Reasoning why iPhones can't be made in the U.S.

Popular Computer Myths that Americans still hold on to in 2019

Keeping up with all the ins and outs of technology in this rapidly changing world can be difficult. It’s completely understandable (and unavoidable) for a bit of false information to slip into the conversation here and there. But when misinformation becomes myth, it can persist in the culture for years—long after it’s been debunked.

In addition to looking at some popular tech tales people google around the country, we also surveyed people about the tech myths they still believe. Here’s what we found! 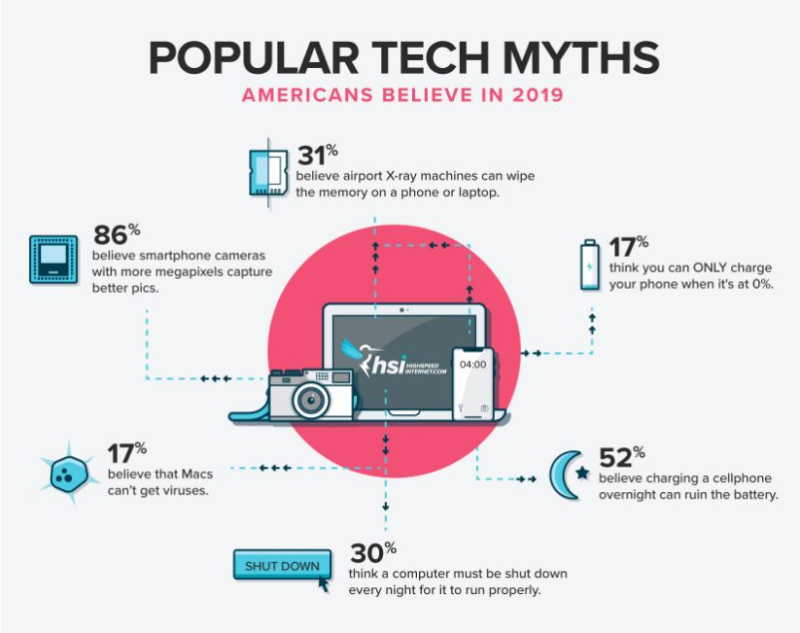 We’ll forgive you for believing this one because it’s tricky. A camera with more megapixels can take pictures with higher resolution, but that doesn’t necessarily mean they’re better quality. The lens and the sensor on your smartphone camera play bigger roles in image quality. For example, if you have a bad lens, you’ll get a bad picture. If you have a bad lens but a lot of megapixels, all you’ll get is a bad picture in high resolution.

52% Believe Charging a Cellphone Overnight can Ruin the Battery

This myth is more expired than untrue. Nowadays, charging modern smartphone batteries won’t ruin them. Years ago, overcharging cellphone batteries could cause them to overheat or wear down their life cycle. Thankfully, both smartphones and batteries have advanced significantly since then.

Okay, we can’t say for sure that no smartphone company slows down your phone, but it’s hard to prove that it’s done deliberately. [So this myth may actually be true. I wonder who paid for this entry?]

Smartphones slow down over time because advances in software and technology require more system updates that use more processing power. Eventually, these upgrades stretch the limits of an older phone and slow it down. This process happens naturally, so smartphone manufacturers don’t really need to manually slow down phones more than what’s already happening to convince you to buy a new phone.

Still, Samsung and Apple were both accused of deliberate slowing and fined for it in Italy. However, even in that case, all the companies were guilty of was simply telling customers to install the latest operating system. Those systems happened to be designed for the next generation of hardware and caused major issues when installed on the older phones. But was that deliberate? Or just clumsy? We’ll let you decide.

The X-rays used by airport security scanners will not erase your hard drive or damage the information on it—you would need a magnet to do that. X-rays can damage images on old-school rolls of film but nothing digital. If your photos are all on your phone, they should be fine.

Shutting down your computer every night doesn’t affect how your computer functions. If you still have a computer from the 1990s, you can possibly extend its life slightly by shutting it down every night, but even that’s debatable.

Modern computers have fewer mechanical components and better power management than previous machines. These advancements minimize the effects of shutting down and restarting your computer. While your computer will need to reboot occasionally to install updates, it doesn’t need to restart every night.

17% Believe that Macs can’t get Viruses

Let’s clear this up: Macs can get viruses. They don’t get them as often as PCs, but it happens. This myth likely stems from years past when Apple’s market share was much smaller.

Early Macs had two big advantages to help keep them virus-free: First, the source code was harder to access. Second, the percentage of people with Macs was so small that it wasn’t worth creating a virus for them. Today, Macs are everywhere. While they still limit access to the source code, they’re mainstream enough to be targeted.

There's even more to this story and you could check it out here. For instance, the report found that "California is thinking about charging phones in the microwave." That's as dumb as drying our cat in a microwave. California, that just embarrassing!